The London Beer Loop: Where to get the cheapest pints near every tube stop

Not being dramatic but this is life changing

Anyone who lives there, knows someone that does or has ever stepped foot in the capital knows the struggle – pints in London are extortionate. But some heroes have created an alternative tube map, mapping the cheapest pints in London. And honestly, this changes the entire game.

The new London beer loop takes the London tube map and completely revolutionises it. Each line is on there, but instead of the boring stops and interchanges, it instead lists the pub where you can get the cheapest pint in that area, and how much it costs.

You’ve heard of the Wetherspoons Loop, but now it’s time for the London Beer Loop.

Check out the map below: 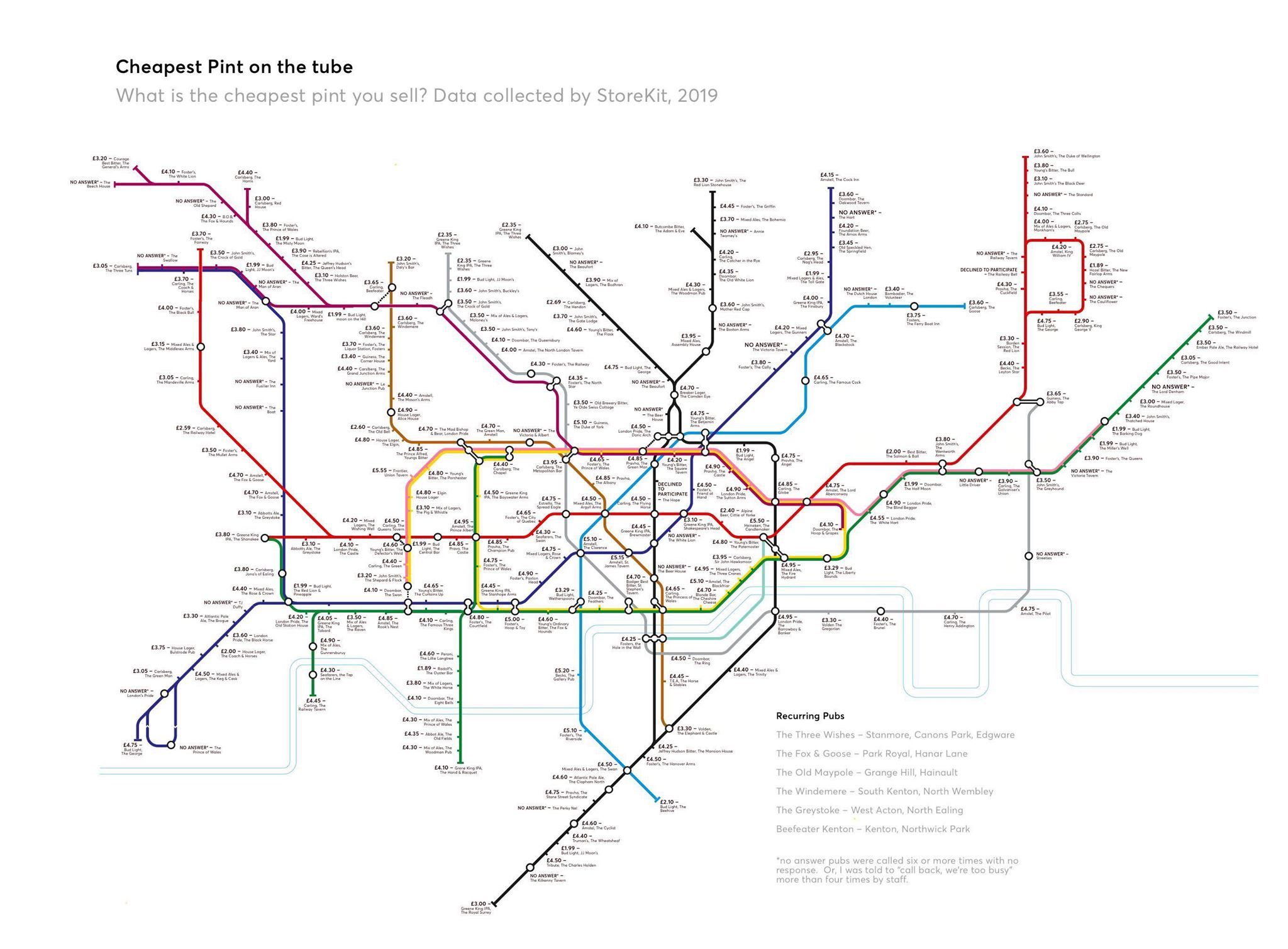 The alternative tube map of the cheapest pints in London, via Storekit

You might have to zoom in on that picture to really get the details, so here are some of the best bits and highlights. I strongly recommended you bookmark this and add to your notes for future reference.

The cheapest pints in London alternative tube map highlights include:

Around 260 pubs are featured on the map, which is a lot so here are the best bits condensed.

The ultimate cheapest pints in London can be found at Wetherspoon’s New Fairlop Oak pub near Fairlop station in north-east London. Here, a pint of Kozel lager costs an incredible £1.89!!!!

You can equal that south of the river too. According to the map, The Oyster Rooms near Fulham Broadway on the District line sells pints for the same price. 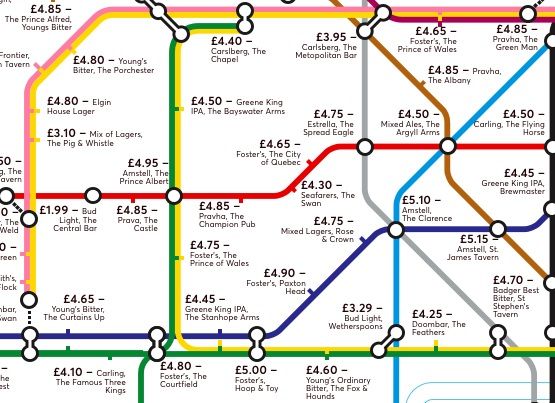 Stay away from Central London

The most expensive of the cheapest pints in London is at the Union Tavern near Westbourne Park. In this pub none of the beers are any cheaper than the £5.55 – which is the price of a pint of Frontier. It’s not bad, but it’s not exactly good.

If you want the cheapest pints you should do a crawl of the Metropolitan line. Cheap pints on this line average at £3.77.

The most expensive line is the Circle line. If you average the cheapest pints this line has to offer, you still get to a pretty unimpressive £4.52. Another reason to hate the Circle line, in case you needed any more.

The cheapest pints in North London:

The number one cheapest pint in London can be found north of the river near Fairlop station on the Central line in Zone 4 (shock). It’s at the Wetherspoon’s New Fairlop Oak and a pint of Kozel is £1.89. A steal. 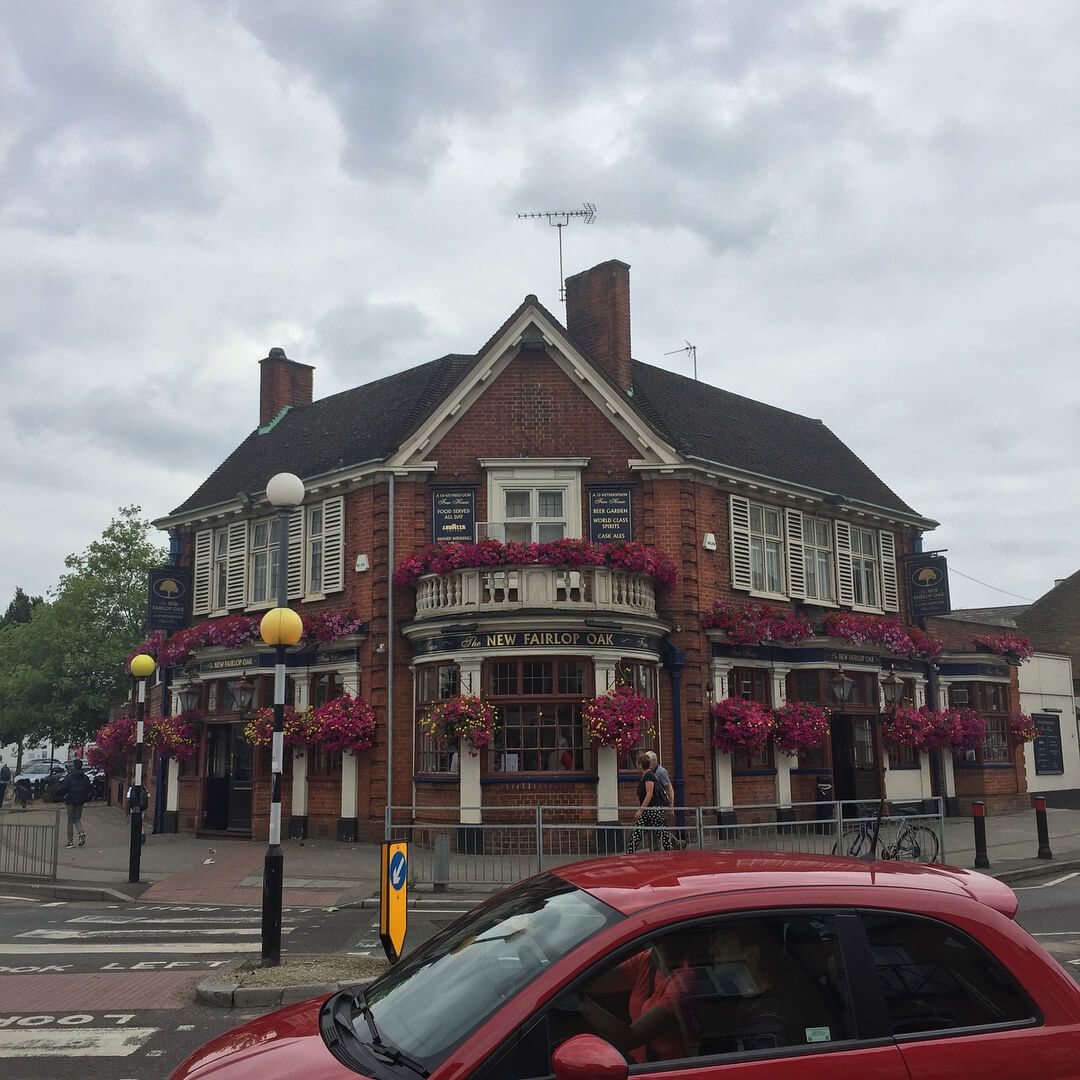 The home of the cheapest pints in London, via Instagram @booze_house_tales

You can get a £1.99 pint of Bud Light at JJ Moon’s near Queensbury station on the Jubilee line. There’s also a number of different £1.99 pints available at The Toll Gate (again, a Spoons) which is right next to Turnpike Lane station on the Piccadilly line in Zone 3.

You can get a £1.99 Bud Light at The Angel, next to Angel station on the Northern line.

The cheapest pints in South London:

Surprise surprise, the cheapest pints in London south of the river can be found in another Spoons. JJ Moon’s which is right opposite Tooting Broadway station on the Northern line will serve you up an ice cold Bud Light for an equally as spine tingling £1.99.

You can also get a £2.10 pint of Bud Light at The Beehive in Brixton. 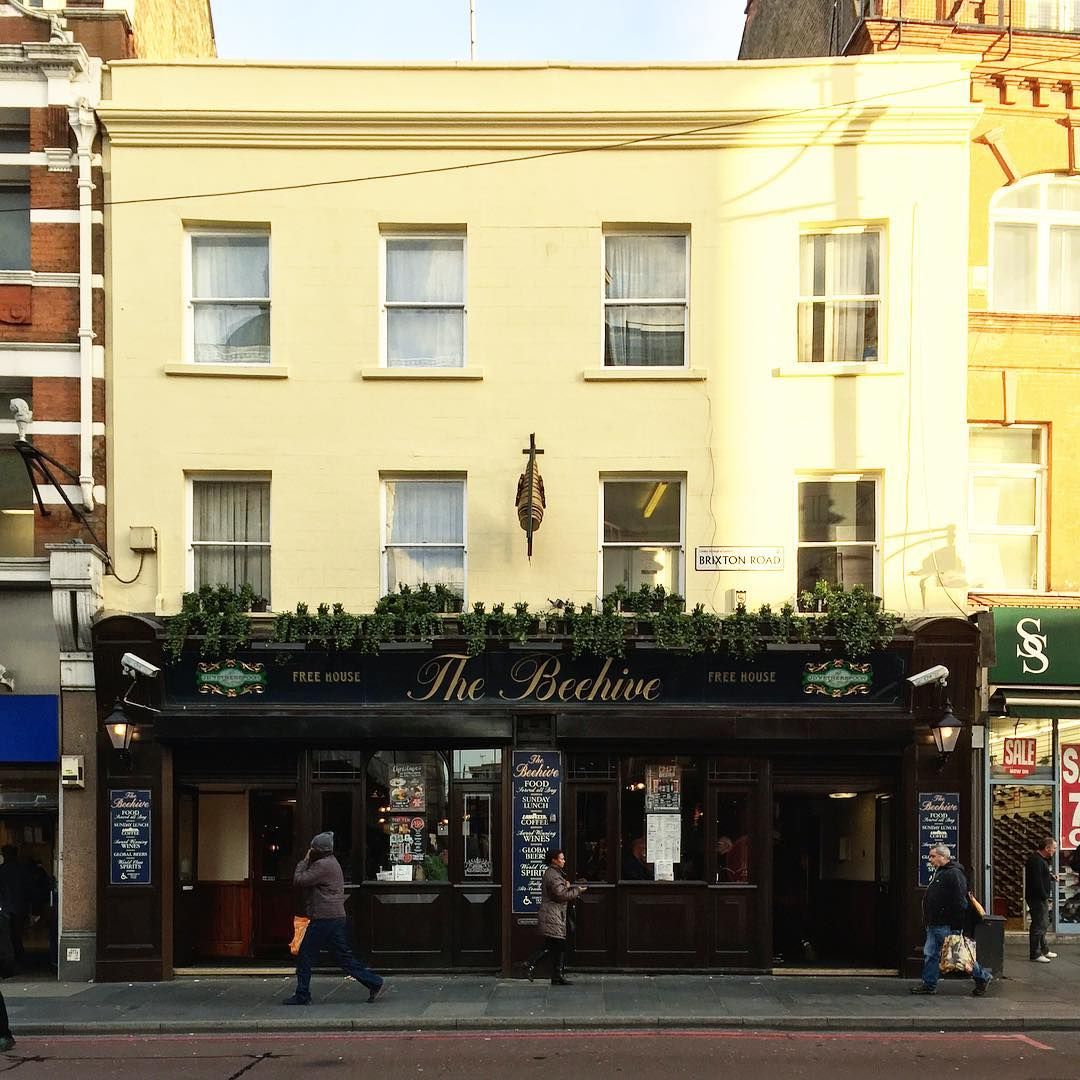 According to the map, The Oyster Rooms near Fulham Broadway on the District Line will pour one out for £1.89.

The cheapest pints in East London:

East London hides a few cheap pints. You can get a £1.99 Doombar at The Half Moon, which is right by Stepney Green station on the District and the Hammersmith and City lines.

There’s £1.99 Bud Lights available a walk from two consecutive tube stations in East London. They are at The Miller’s Well by East Ham station and The Barking Dog by Barking station. Both stations serve the District and the Hammersmith and City lines.

There’s a £2 Best Bitter on the menu at The Salmon and Ball right by Bethnal Green station on the Central line.

The cheapest pints in West London:

If you head veeeeery south-west (all the way to Hounslow East) you can get a £2 pint in the Coach and Horses. That’s on the Piccadilly line, just about. This makes this pub the cheapest independent in London. 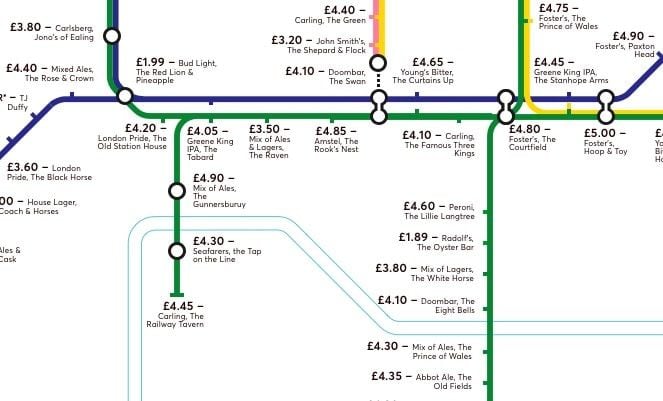 A small section of the West / South West London map, including the Fulham and Ealing Common winners

If you don’t fancy trekking that far then you can get a £2.60 pint of Carlsberg at The Old Bell right by Kilburn Park station on the Bakerloo line.

But then again, that’s pretty north west, so if you want to stick to pure west London, there’s a £2.59 Carlsberg with your name on it at The Railway Hotel right next to Greenford station on the Central line.

There’s also £1.99 Bud Light being served at The Red Lion and Pineapple which is slap bang in the middle of Ealing Common and Acton Town stations, which are both on the District and Piccadilly lines.

• We went inside the ‘Super-Spoons’, the biggest Wetherspoons in the UK

• How to down a pint in under three seconds