Sam Thompson wants you to buy a hoover!!

Another season of Made in Chelsea has come to an end. There's been tears, bro break ups, forbidden loves, and of course, no end of tragic sponsored posts on Instagram.

From bad clothing, to hoovers, to the products clearly none of them use, the latest Made in Chelsea cast are making money off almost anything.

Here's a round up of the most tragic sponsored posts from the Made in Chelsea cast:

What's more tragic than a couple's sponsored Instagram post? A couple in matching outfits, as modelled by Harry Barron and Melissa Tattem. The brand they are doing spon-con for is called 'Ambience Vibes'.

And this isn't even the worst part of this post. Harry Barron pledges to donate £1 per sale – these sweatpants sell at around £50 – towards an ocean clean up. Don't worry about climate change guys, because Harry Barron is tackling it one quid at a time. 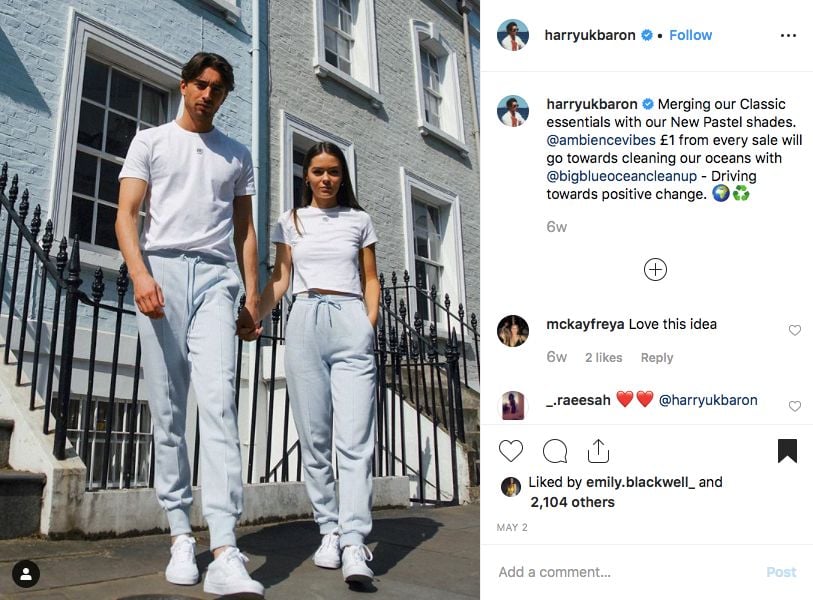 Mark Francis Vandelli, the man who thought Nando's was a wine bar, and is both the richest and poshest on Made in Chelsea, teamed up with… McDonald's?

The majority of the MIC cast promote suits and protein shakes, but not Mark, who in this baffling collaboration manages to make a McDonald's look classy and elegant. You do you Mark, but a McDonald's burger has never looked more out of place. 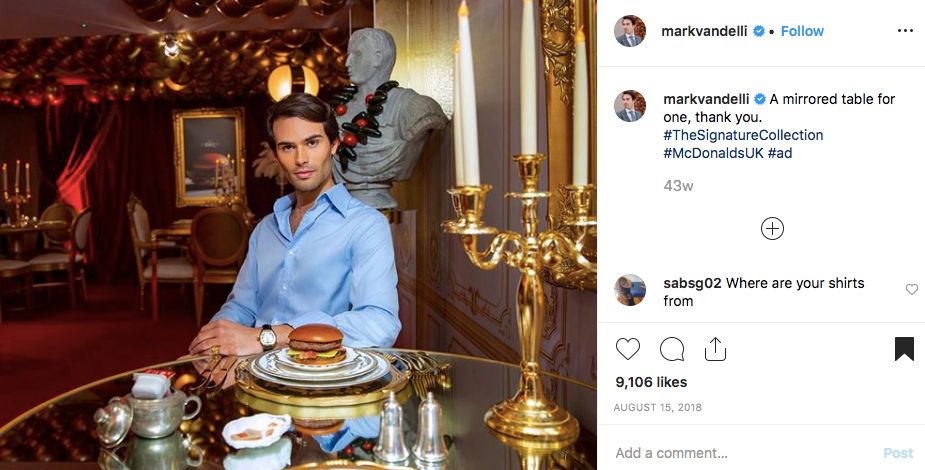 Miles has a big boy gun, and a big boy car, and a sad, tweed, big boy suit. His facial expression says it all. 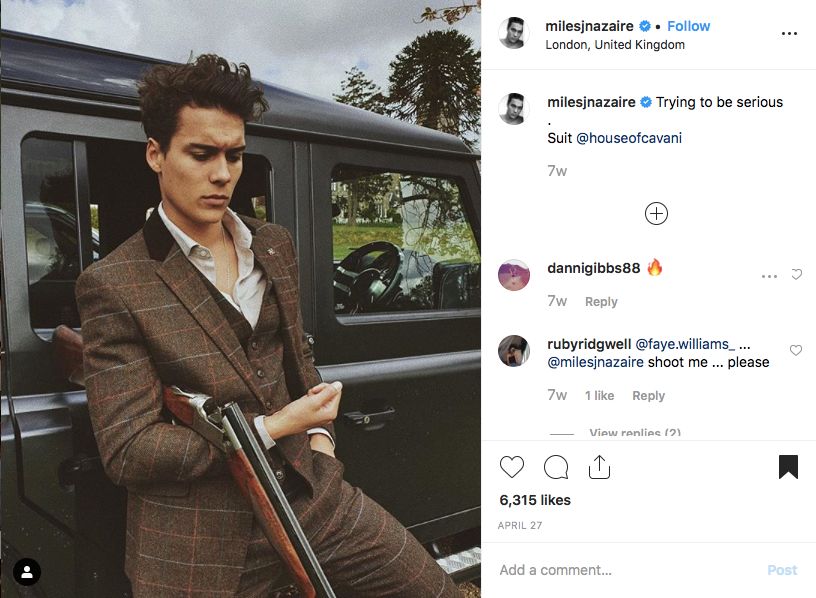 Yes, this is a post from 2019, with a member of the Made In Chelsea cast advertising single use plastics. Yawn!

Sophie Habboo's post explains a never before heard tip that water is an essential for healthy glowing skin. But this is flavoured water, i.e full of sugar and artificial flavourings, which is bad for your skin! Great to see the Made in Chelsea cast using their platform for good. 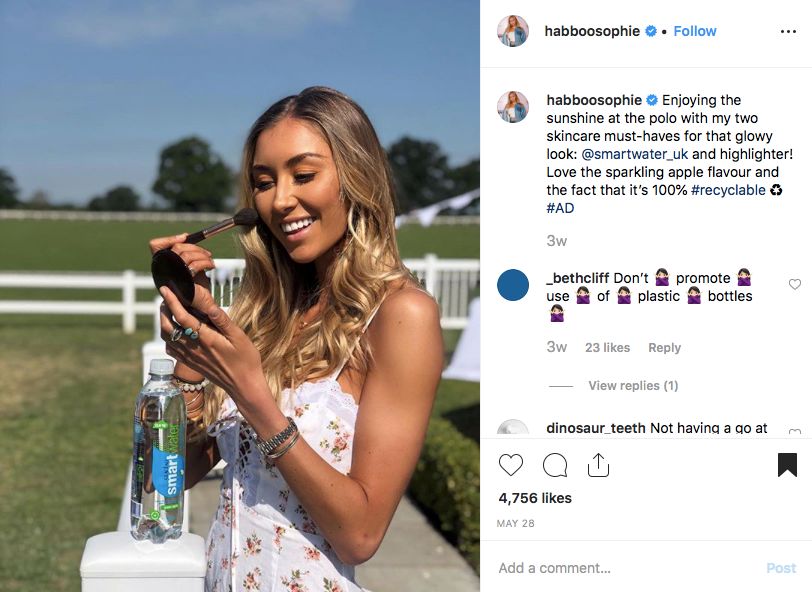 What's the connection between the luxury skin beauty brand and International Women's Day? Very little, other than the cheques given for ads to exploit the celebrations!!! Being this culturally deaf and lame in a sponsored post, is truly an achievement. 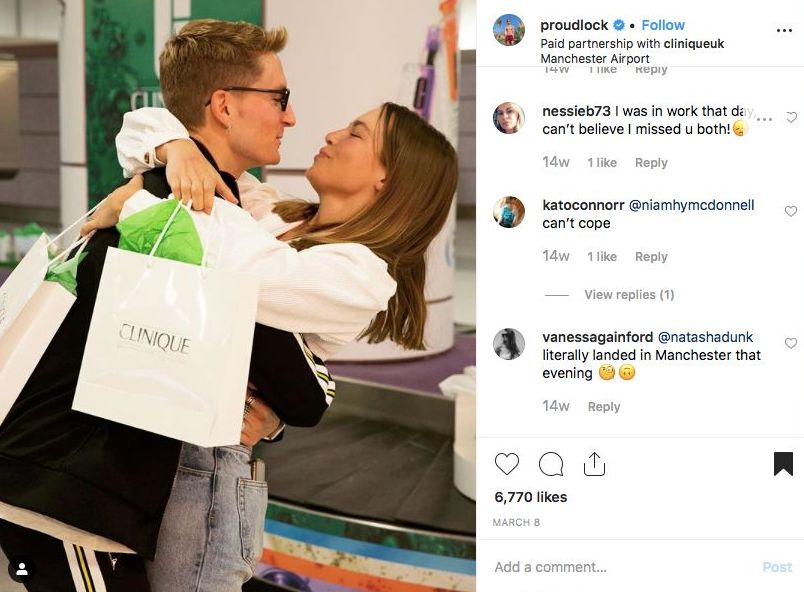 Looking at this post, you would think that it is a Calvin Klein ad. But it isn't, because Melissa Tattem isn't that famous. It's actually an ad for a fake tan, which you can't really tell at a first look, because the thing that catches the eye is the matching Calvin Klein underwear which Melissa doesn't get paid to promote. Shame. 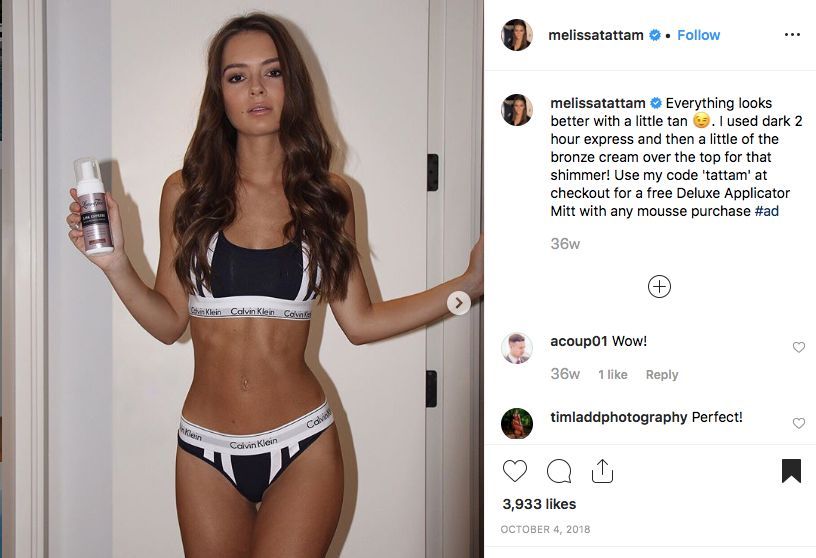 I don't know what the most tragic part of this post is? Is it Sam Thompson pretending he's ever in his life had to hoover? The fact he's complaining about a hoover being £500 quid? That he's advertising a £479 hoover as an alternative to the £500 one? Or just Sam Thompson in general? 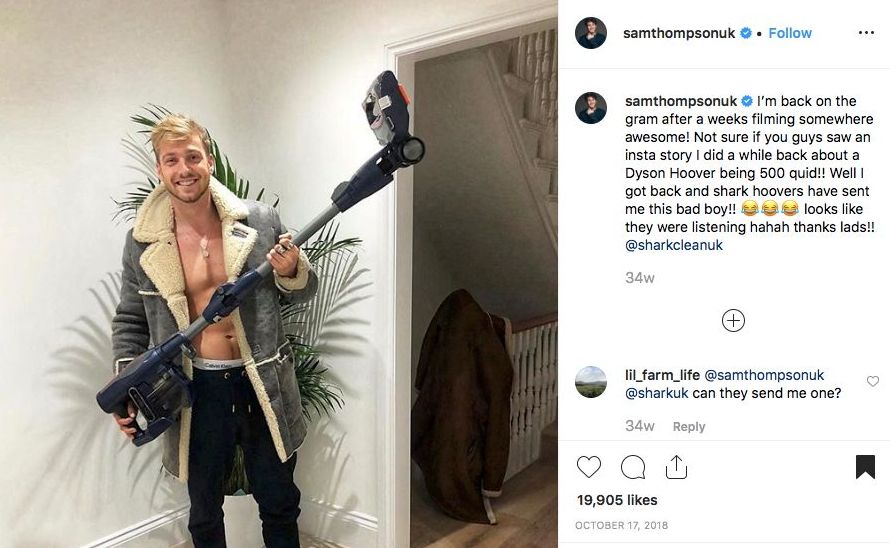 Never Fully Dressed has a collaboration with Made in Chelsea, so this ad mostly, makes sense. Or it would, if Sophie Herman didn't look like a walking candy cane.

Odds on she can't get out of the bath in those platforms. 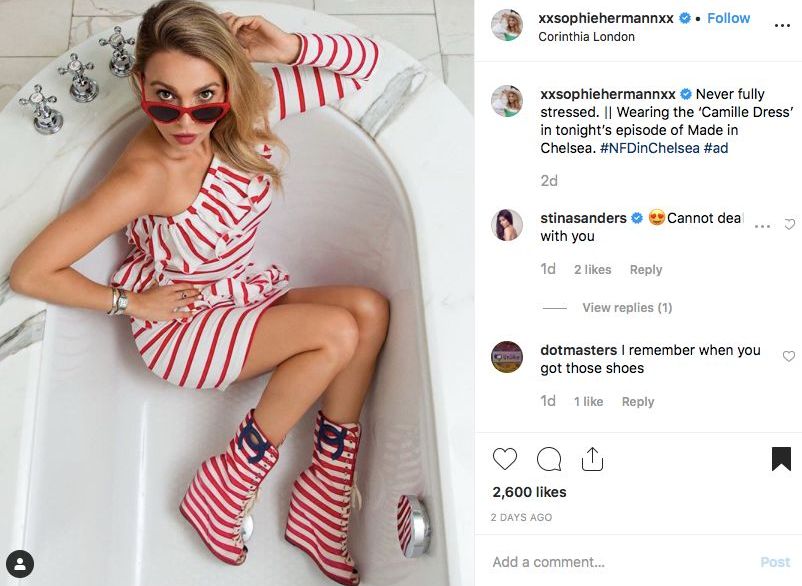 If you've ever felt like you needed the process of doing laundry explained to you, then Louise Thompson is your new best friend. Her add with Dettol details that laundry detergent kills bacteria and removes odour, who knew! 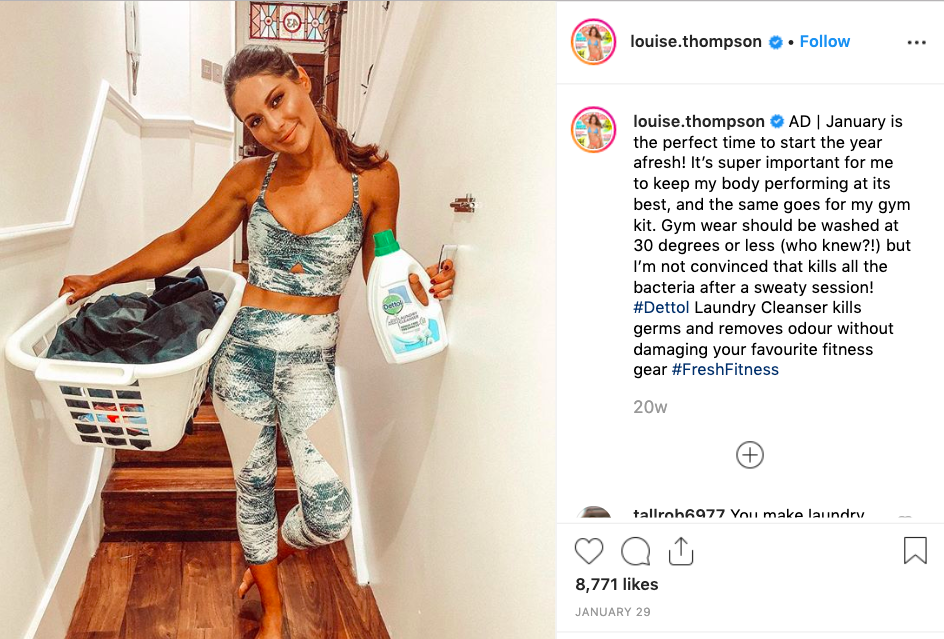 Ryan Libbey's post is him in collaboration with the performance division of Volkswagen (did you know he gyms?) The premise of the collab is that he is going to run alongside the car, to "challenge the different aspects of his fitness".

So he's going to chase a car around a running track, and the car is going to be his training partner. Peak having no mates. 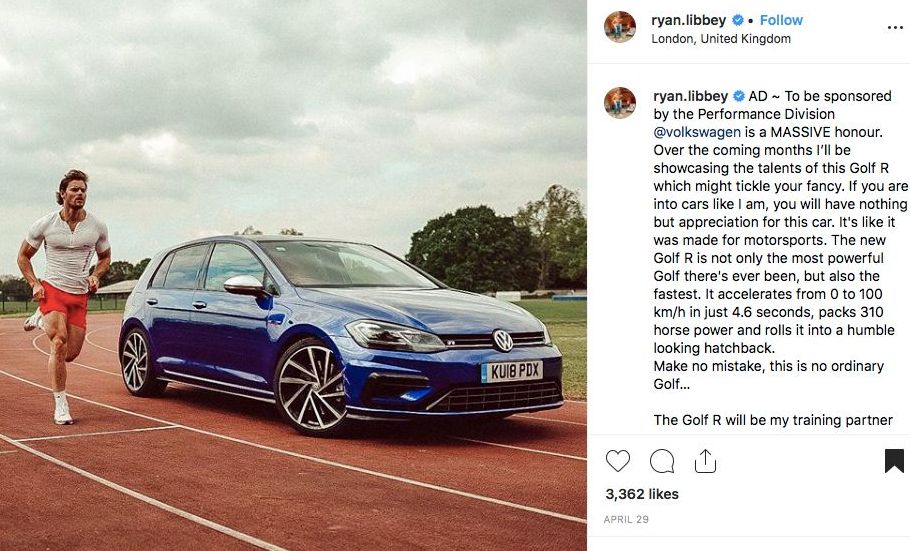 Honestly, who did the marketing for this? I fail to see the connection between revolutions and teeth whitening, and you can't even see Olivia Bentley's teeth in the advert to see if the product is of good quality. 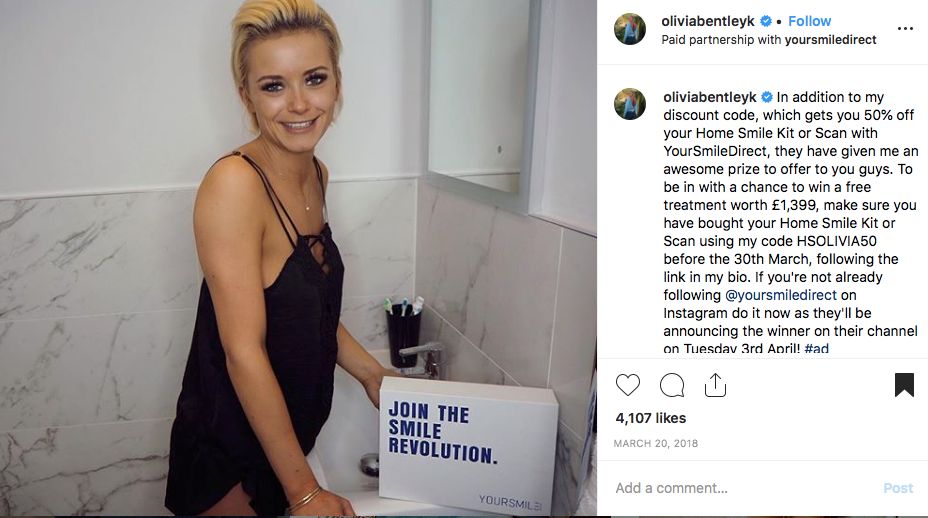 This add, with the caption, "I'd rather be a rider for a minute than a spectator for a lifetime", is definitive proof that the MIC cast should not be life coaches, or try and ride motorcycles. 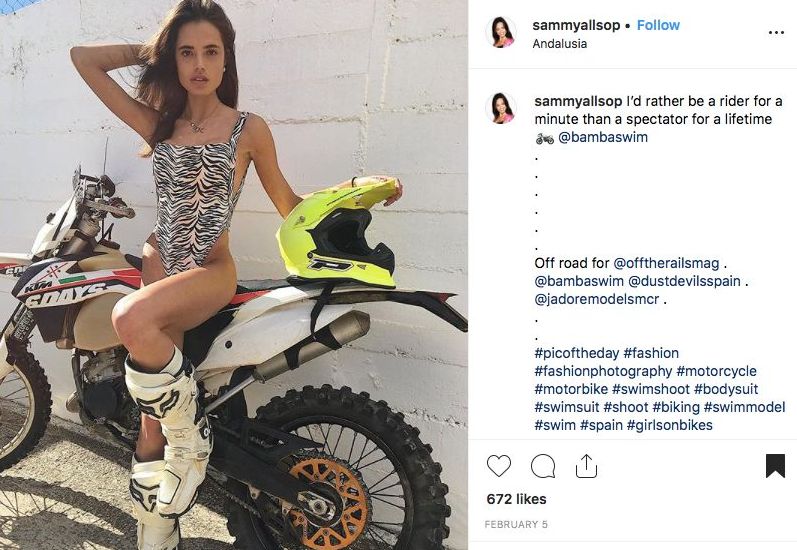 A moments silence for all the MIC cast, who "don't have time to meal prep". There is truly no way of doing a breakfast shake add, that isn't horrendously tragic. 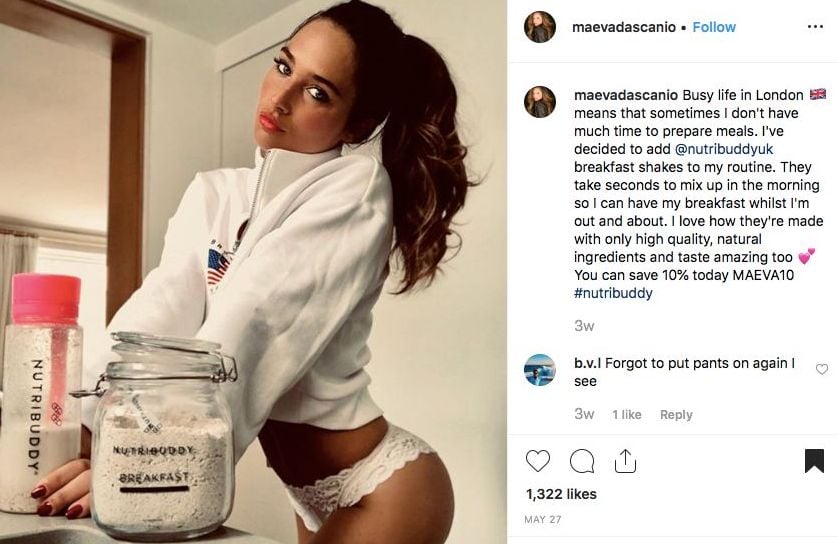 Of course, James Taylor is in a shirt thats too small, doing an add for a suit company which no one has heard of, and he acknowledges how hardly anyone in the MIC cast likes him. Big Spencer Matthews energy. 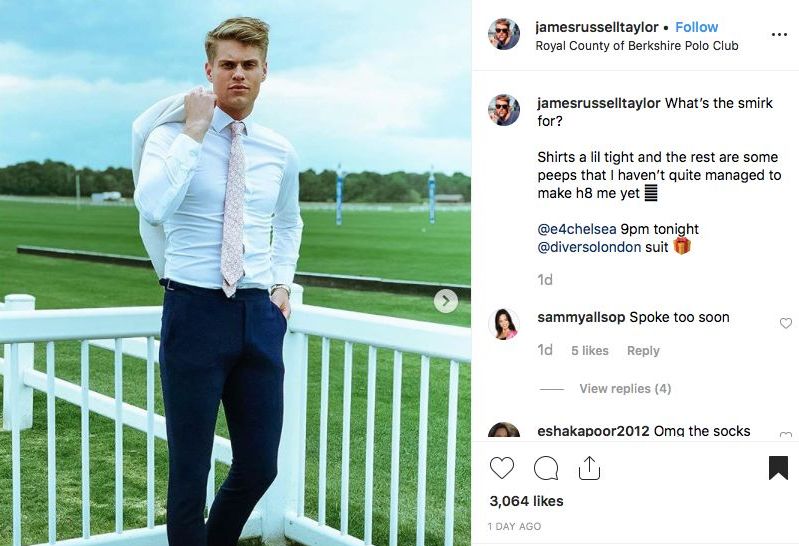 • Made in Chelsea Rich List: This is exactly how much money each cast member actually has