There are MORE Game of Thrones mistakes fans have spotted, obviously

How did we miss those before?!

This week, Game of Thrones unintentionally left a coffee cup in a medieval banquet and everyone went wild.

Since the discovery, there have been more production mistakes found by eagle-eyed fans throughout the whole series.

1. An extra wore denim in the first episode!!!

Watching the Game Of Thrones first episode and there a guy in the background with a straight up Patagonia jacket, blue jeans and boots pic.twitter.com/YAFTF4hnIN

Granted, it was in the first ever episode, so there were bound to be mistakes made. I mean… it's kind of a strong look?

2. Jon Snow's Valyrian steel sword was actually made out of rubber and it showed

Obviously we all know Jon Snow is useless. But this scene shows just how extra useless he is, because his sword isn't even made out of metal!! It's made out of rubber. How predictable.

3. Jon Snow's scar moved when he came back to life

The deep wound on his chest has healed a bit and miraculously moved a bit more to the right.

In Season Two, fans spotted props disappearing around Tyrion, especially his napkin in 'The Price of Winterfell.' Tyrion's napkin was tucked into his armour, then on the table, then on his lap and then back in his armour.

5. Stannis Baratheon had an electrical power pack dangling out of his leg

When Stannis Baratheon was dying in season five, an electrical power pack is lying underneath his right leg. Not even electricity could revive him, soz no soz. 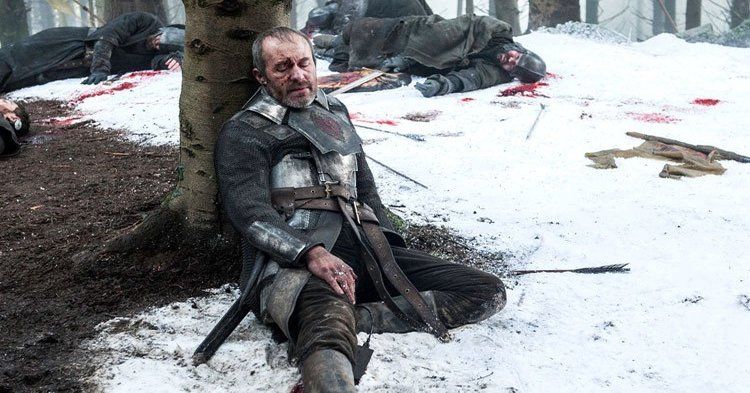 • The 83 most hilarious memes from Game of Thrones: The Last of the Starks