The 83 most hilarious memes from Game of Thrones: The Last of the Starks

These get better and better every week

This week, we eagerly waited to find out the aftermath from the Battle of Winterfell. Nobody thought another sex scene, a Starbucks cup left on set, and lots of good boy Ghost memes would be what we would get instead.

We're now in the dreaded lull between Game of Thrones episodes, the worst part of the week. So, in the mean time, feast your eyes on the 83 ultimate Game of Thrones season 8 episode 4 memes – the only list of memes you will need to get you through the week. If you thought the memes last week, and after episode one and episode two were good, this week's memes are even better.

All the best Game of Thrones season 8 episode 4 memes:

*Warning: Some of these Game of Thrones memes contain spoilers*

my favorite show in the entire world forgot a STARBUCKS COFFEE CUP ON THE TABLE WHILE FILMING pic.twitter.com/60z3pOCfg9

You're telling me they had TWO YEARS to put together a decent show and they couldn't even spot the goddamn Starbucks cup in Winterfell??!?! #GameOfThrones pic.twitter.com/8opg7nyydv

arya: “we’re family, the four of us, the last of the starks”

Missandei. A queen of many tongues. Never looked like she ever missed a bath. Coldest twistout of the Seven Kingdoms. Made an Unsullied quiver in his armor. We will forever stan the real. #DemThrones

How all #GameOfThrones fans want the show to end pic.twitter.com/deiiH6HdUx 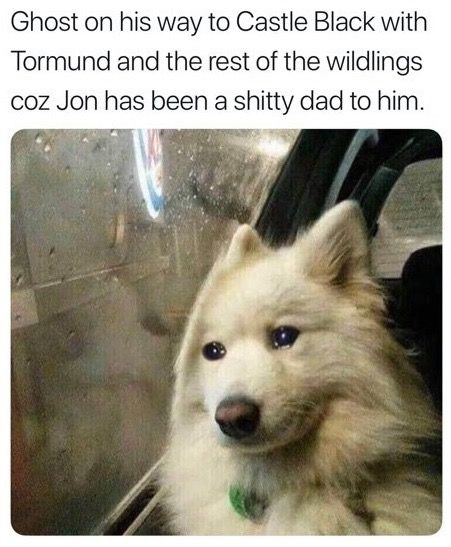 this is what arya and gendry’s relationship looks like pic.twitter.com/aKEV9FKH0g

My dumbass really thought Drogon was gonna come save missandei because she said dracarys- #GameOfThrones pic.twitter.com/cxofdqXpNJ

Last night's #GameofThrones had a coffee cup. I hope Dany has a good Starbucks name.

"I have a latte for:
Daenerys Stormborn of House Targaryen, Queen of the Andals, Protector of the Seven Kingdoms, Mother of Dragons, the Khaleesi, the Unburnt, the Breaker of Chains. No one? pic.twitter.com/OmByiRbLzn

Sansa mailing everyone in Westeros the tea Jon has just told her in confidence #GOT pic.twitter.com/HQy236Fchf

Ghost going North because the CGI budget is spent on Dragons #GameOfThrones pic.twitter.com/FjF4OZqAI8

Us: Nah, Dany can't become the Mad Queen and burn innocent people down

Us: BURN THE WHOLE CITY AND THAT BITCH DOWN!!#GameofThrones #DemThrones #GoT pic.twitter.com/cf8z52hxnu 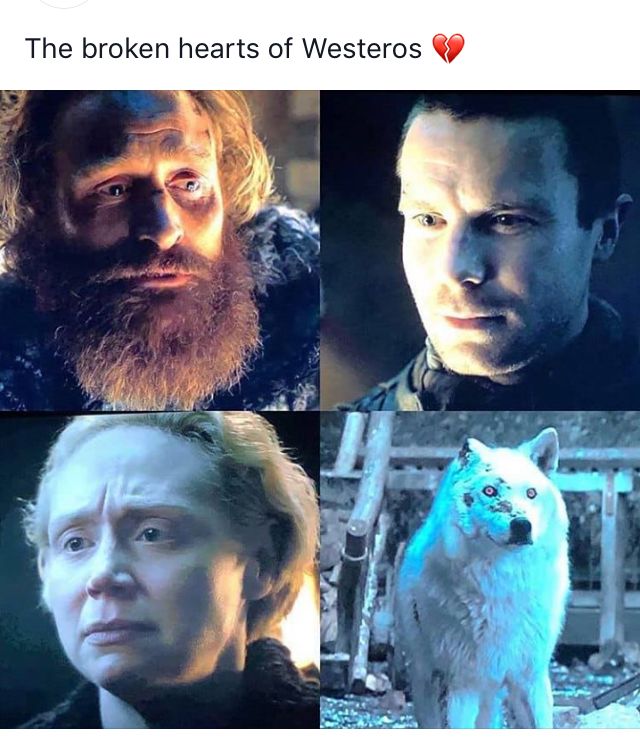 gendry: be my wife be the lady of storm’s end
arya: seen ✔️

Brienne of Tarth: you can't leave me here standing all alone, I thought we had something

Jamie Lannister: sorry Brienne but you were just a one-knight stand

The woman that I would try, is happy with a good guy #gameofthrones pic.twitter.com/FAz9BzKfAW

Gendry really proposed after one night of sex. He might as well jump on the next Drake song with that attitude.

-Daenerys Stormborn of House Targaryen, First of Her Name, the Unburnt, Queen of the Andals and the First Men, Khaleesi of the Great Grass Sea, Breaker of Chains, andMother of Dragons#GameOfThrones #GOT #GOTS8E4 pic.twitter.com/47j00qMX8x

Did not see that one coming… 😧 #GOT pic.twitter.com/RltdIlLB5J 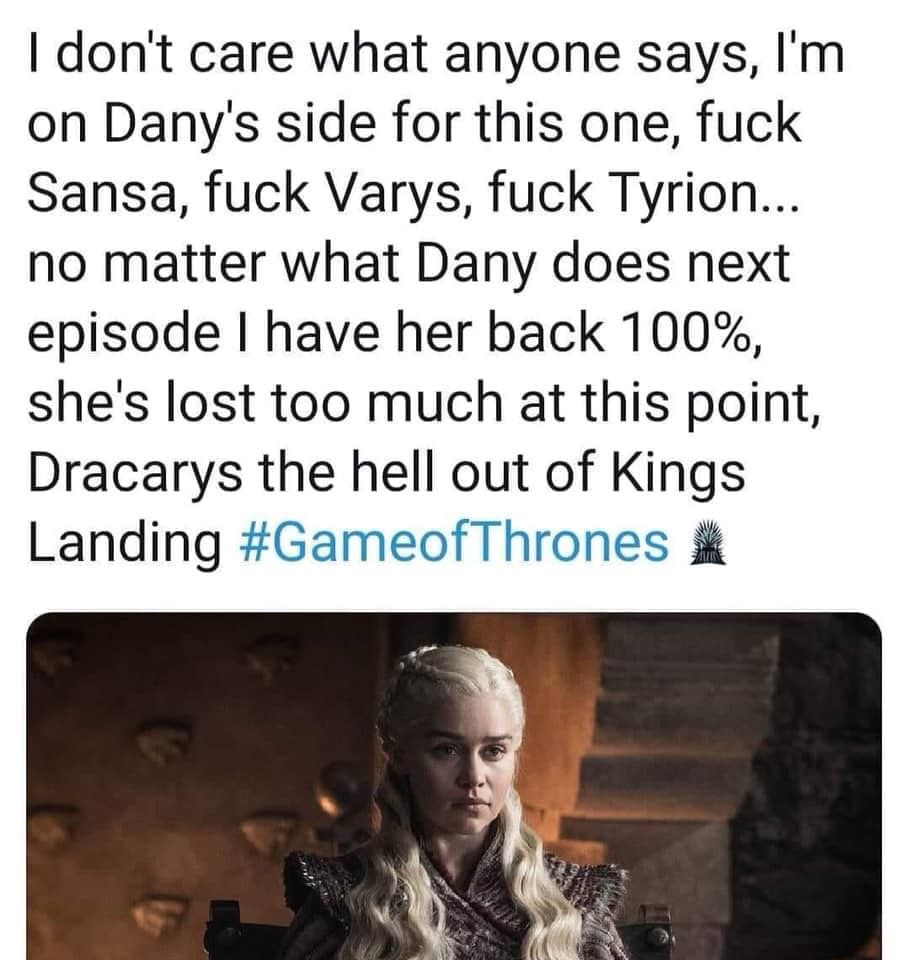 Tyrion: your brother always said he wasn’t a Stark.

Sansa after having sworn to not tell anybody about Jon’s heritage: pic.twitter.com/UhwXZXACzd

the only spin-off I'm waiting for 🐺 #tormund #GameOfThrones pic.twitter.com/ZUJQxhOZEJ

jon: swear you won’t tell anyone this secret

sansa: I swear it

Ghost watching as Jon rides off to fight Cersei without so much as a “good boy” after fighting the dead for him. #GameofThrones pic.twitter.com/LIbh4SwckJ

Us: Nooo, Dany don’t go MAD and kill innocents in King’s Landing. U better then that, gurll.

Us: FUCKING BURN THEM ALL! LET THEM SUFFER. ‘DRACARYS’ THEIR ASSES.#GamefThrones pic.twitter.com/OfenNrcALI

Daenerys Stormborn of House Targaryen, the First of Her Name, Queen of the Andals and the First Men, Protector of the Seven Kingdoms, the Mother of Dragons, the Khaleesi of the Great Grass Sea, the Unburnt, the Breaker of Chains, and Drinker of Pumpkin Spice pic.twitter.com/BOPdolRhXz

Look how sad the good boy is what the fuck Jon #gameofthrones pic.twitter.com/Esh81ViENw

This season alone #gameofthrones has:
1. used two different Dany wigs for the same scene
2. forgotten a starbucks cup on the table
3. referred to Gendry’s bastard surname as “Rivers” instead of “Waters”

“Give me a city and I don’t kill you” pic.twitter.com/Ol5fme3UmB

Tyrion trying to control Danearys, Cersei, Sansa, Bronn and Varys all in one episode:#GameOfThrones pic.twitter.com/jtXuxFiOyI

Varys looking at Jon after he finds out he has a better claim to the throne #GameofThrones pic.twitter.com/zA2ZJQILSe

when jaime got on that horse and left brienne fuckin crying in the snow for cersei #GameofThrones pic.twitter.com/s1FplMTnCM

#GamefThrones When you come over to Westeros and lose half your Unsullied, nearly all your dothraki, two dragons, your two bffs and your council is plotting to betray you and the new lover you lost it all for is your nephew. #dracarys pic.twitter.com/8nRkJfJ03c

Sansa 2 mins after swearing to Jon that she'd keep it a secret #GameOfThrones pic.twitter.com/TY4ky492vn

tyrion to cersei: “you are not a monster”
literally everyone: pic.twitter.com/UVS6FsxXOf

I’d like to speak to a manager about the mistreatment of animals in this latest episode. #got pic.twitter.com/HjeKbvb5Rs

daenerys trying to do her hair next episode without missandei pic.twitter.com/G74xil5IBB

good morning to everyone except cersei lannister

daenerys and drogon rolling up on cersei next week #GameOfThrones pic.twitter.com/48tbH5q1z0

Tyrion: MY SISTER IS A GOOD PERSON

Tyrion: Do this for your child
Cersei: “Kills Missandei”
Tyrion: pic.twitter.com/HZtwblUV68

The woman that I would try, is happy with a good guy #GameOfThrones pic.twitter.com/ars4eGCPHF

I wonder how that barista spelled Daenerys…

Me in my bed tonight at 4:47 AM still thinking about how Tyrion really thought he was gonna convince Cersei into the giving up the Iron Throne: pic.twitter.com/y2aUw0WQ7O

Most importantly,
Ghost doesn't get a hug ♥️ pic.twitter.com/M2DVfBEpOy

bran saw that starbucks cup but didn’t tell anyone

Arya and The Hound when they arrive to Kingslanding to kill Cersei and the Mountain #GameofThrones pic.twitter.com/V4y9XpAZ3b

characters you are not allowed to hate:

4. the maid of tarth

Who went home on Game of Thrones?

Why is Brienne suddenly acting like she’s in a romcom? How does Rhaegal just get shot out of the sky? Where the hell is Yara Greyjoy? Why can’t anyone (Jon, Varys, Tyrion) make up their damn mind? AND WHEN DID STARBUCKS OPEN IN WINTERFELL?! pic.twitter.com/2UUGojFzBS

next week on #GameofThrones pic.twitter.com/g1obk0wuUa

Ride a dragon one time and suddenly you forget about your Direwolf who’s literally saved your life.

turning daenerys the mad queen because everyone betrayed her, making her look like a fool and weak, killing her dragons… in this essay i will explain why men can't write female characters

Daenerys Targaryen is just Walter White but for Wine Moms

got a leaked copy and I have to say the series finale of game of thrones was fun but a bit of a letdown pic.twitter.com/V9plNvxnQG

Rt if you think ghost was the best boy in winterfell and deserved all the pets jon didn't give him #GameOfThrones pic.twitter.com/JPWj0a0aVg

Tormund wouldn't have hurt her like this and that's the tea. https://t.co/BIhvFBBz7Y

Daenerys with all her remaining friends, dragons and armies pic.twitter.com/5KmBp1yOoS

Me coming into work and complaining about Game of Thrones and the mess it has become pic.twitter.com/vwGmvM3AXQ

the only man who can keep secret in seven kingdoms.#GameOfThrones pic.twitter.com/hzpPfmIBP7

Who did this? 😂 #GameOfThrones pic.twitter.com/gKmeWg20zW

Starbucks cup wasn't the only time they messed up#GameofThrones pic.twitter.com/hUFnIRNHSU

When does Game of Thrones season eight, episode five air and how many episodes are there?

Season eight, episode five of Game of Thrones will air in the US on HBO on Sunday at 9pm Eastern time. In the UK, this is a 2am start, for hard core fans. It's shown at this time on Sky Atlantic, and then repeated on Monday evening. You can also stream all Game of Thrones episodes on Now TV.

There will be six episodes in the new season, all of which are over an hour long, and then a full length, behind the scenes documentary!!!

• The 73 best memes from Game of Thrones: Battle of Winterfell

• If Game of Thrones characters were at uni, this is what they’d be like