I’ve never had much luck on Tinder. For years I’ve thought that it was them, not me. But entering into a new year makes you take stock of things and so I had a long hard look at myself. What if it IS me?

I needed a radical shake-up, something drastic. I needed to change my dating app habits sufficiently, but still present a recognisable version of myself. Above all, I needed help. So I went to the person I go to for every little question from "can I reheat rice?" to "do these earrings go with this dress?" – my darling mother.

She seemed elated at the prospect of choosing her future son-in-law and so we got to work immediately. I wanted to start afresh – deleting the app and my old bio and pictures with it, we set up my new profile together.

Setting up my profile

Normally, I use a few of my most recent selfies and a few pictures with my mates so I don’t look like a total loner. Maybe one or two more "risqué" ones with a slither of boob or leg. But my mum had other ideas.

She insisted on using a selfie I’d sent her once – not ugly by any means, though rather cringe as it was intended for her eyes only – so I obliged. I felt kind of uncomfortable with this grainy, unedited, close-up selfie on my Tinder profile, but mummy knows best! I offered her a picture of me and my friends to use next, but she was quick to shoot me down: "How will they know which one you are?" Valid point, mum. 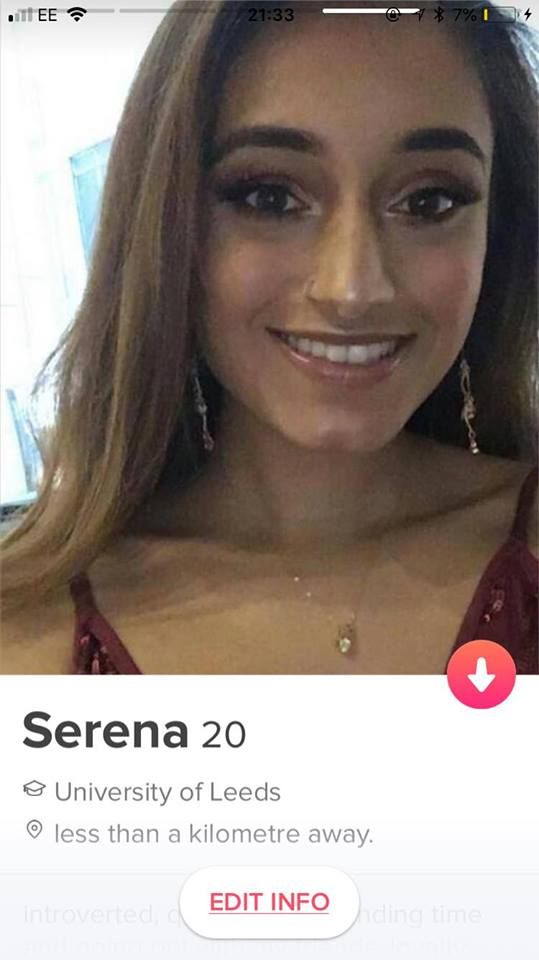 Not my usual choice but ok

She then suggested using a full length picture so the men of Tinder could see "how tall I am". At 5'2", I am categorically NOT tall, but I did my best to find a photo where I might escape being described as short and dumpy. I showed her a mirror selfie which was instantly shot down as being too "provocative" – far too much leg and definitely too much tit. According to her, it’s better to look "classy", which tbh might explain why I’ve had no luck in the past, as classy is probably the last word anyone would use to describe my usual Tinder profile. 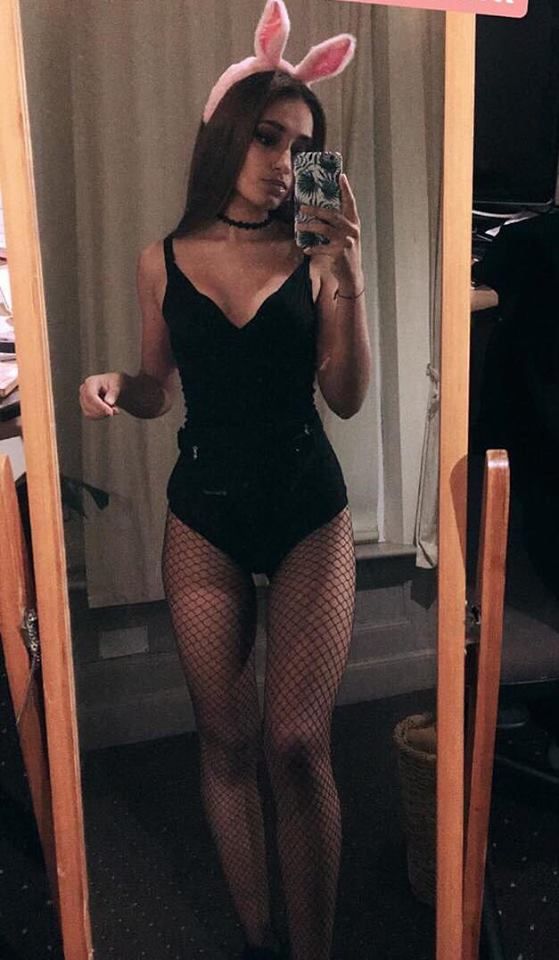 We searched for an acceptable photo for a good few minutes. This was taking much longer than my usual slap-dash efforts, but I was patient – maybe rushing my profile was where I’d been going wrong. We found a full length photo of me from nearly three years ago, but she didn’t seem to think having such an old photo was an issue. I’ve grown out my hair and lost weight since then, to the point where I don’t even look like this anymore, but my mum’s wish is my command. 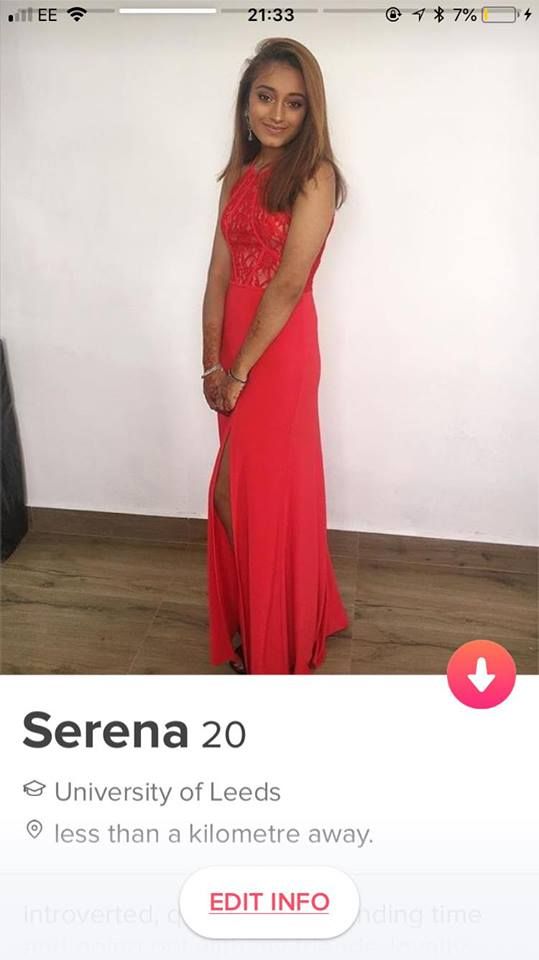 Then came the bio, and I can only say that my mum is something of a secret Shakespeare herself. Who knew she was capable of such poetry?

We started off by saying I’m "introverted and quiet", which, I would have thought, would probably warrant a left swipe for poor old me. But I reckon my mum was thinking long-term and just preparing my matches for my awkwardness IRL, which is arguably a stroke of genius. Maybe this is where I’d been going wrong too? Maybe I’d been setting the bar too high and catfishing people with my bio? 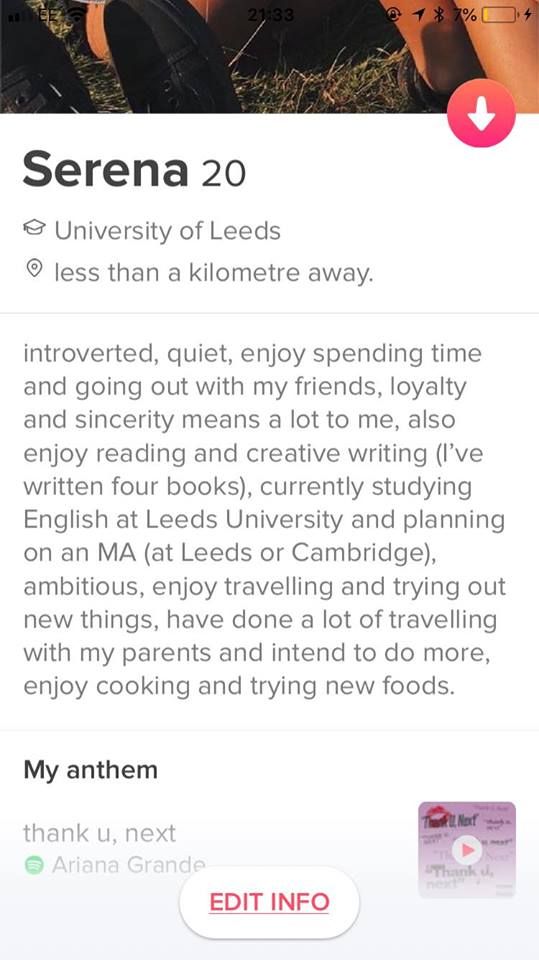 Okay mum just out me why don't u

She was keen to add in that I love going out with my friends to balance things out and make it look like I have a social life (genius, again), and suddenly came out with a list of hobbies and interests even I’d forgotten I had. Damn right I like travelling! And cooking! And reading! Instantly I actually seemed like a rounded, functioning human being. Things were getting a little long-winded though, and I suggested that she might want to bring the bio to an end, but she retaliated by saying "but you don’t want to look boring". Again, fair point.

"Done?" I asked her, to which she frantically gasped "don’t send it yet!", as if my bio was about to be broadcast to every male in the surrounding area, never to be edited or changed again, like a text. She perused my profile again and suggested going to get my dad to proofread the bio, but I had to draw the line at that point.

I saved her work and explained to her how swiping worked. Suffice to say, we had surprisingly similar reactions to the men we found. Only she vocalised what I usually thought to myself.

"Why has he only put a photo of half his face?", "Which one is he?", "Isn’t it suspicious that he hasn’t put where he works?" Amen, sista. "What’s that on his face?", she innocently asked, when a guy with the unfortunate Snapchat dog filter on his face popped up. She was ruthless, swiping left on anyone who had their face obscured or anyone who had their six pack out. "That’s just showing off", she said. Preach girl!!!!

Simultaneously we both paused in our ridiculing of the male race when a guy who looked like an actual human being appeared on my phone. She paused with her thumb poised over his face, before saying "he has a kind face. Shall I swipe right?" I nodded.

The little "it’s a match!" thing came up on the screen and my mum was thrilled to know someone, somewhere out there, finds her daughter palatable. There’s hope for me yet, mumma.

My mum’s criteria did seem kind of arbitrary at times, though.

Things my mum likes: Accountants (my dad is one so I guess she has a type??), medical students, men in suits, men with photos of themselves skiing (she wants me to get that coin).

"When does it end?", she asked. Oh mum. I felt a little like I was in a Black Mirror episode when I had to tell her that it never really ends. We just give up at some point.

A few matches later ("he’s studying dentistry, he must be clever!") and we came to the bit I was dreading most. Messaging these poor men.

Normally I take a good few minutes deciding what to say first to a guy. I’ll usually scroll through their profile and try and find a point of interest with which to start a conversation. My mum, however, had other plans.

"Tell him he has a kind face", she said, "And ask his star sign!" My mum is a big believer in astrology. If he’s a Capricorn he’s in trouble.

I cringed visibly as she typed out "you have a kind face" – a far cry from my usual cool and aloof openers. We asked his star sign and I wondered if I’d actually get a reply from such a bizarre opening.

A new match sent over a dry "hey". "That's boring", my mum said. I'd failed to prepare her for the barrage of boring guys out there. 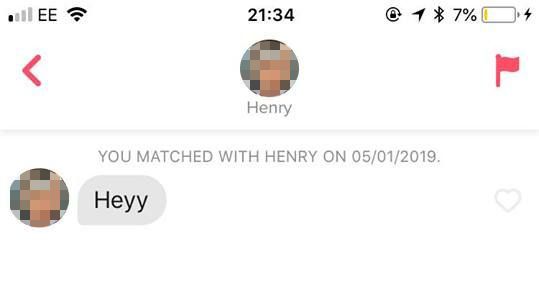 Onto the next match, my mum paused: "Can he see what you’ve said to the first guy?" When I told her no, she seemed delighted that we could literally message all our matches the same thing without them knowing, and we did just that. Does this make my mum a fuckgirl?

Waiting with baited breath, we watched as the replies dribbled in. 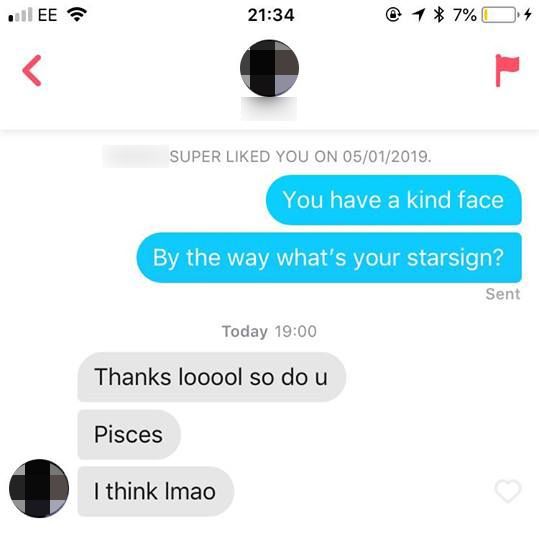 To be honest, I was just surprised that my unusual openers got replies at all. Maybe my mum is a Casanova after all, and my coy questions and appalling flirting ought to give way to blunt statements and astrology questions.

A few drab, standard messages came in from those plucky enough to message first. Whilst I'd usually ignore generic compliments, my mum had other ideas. 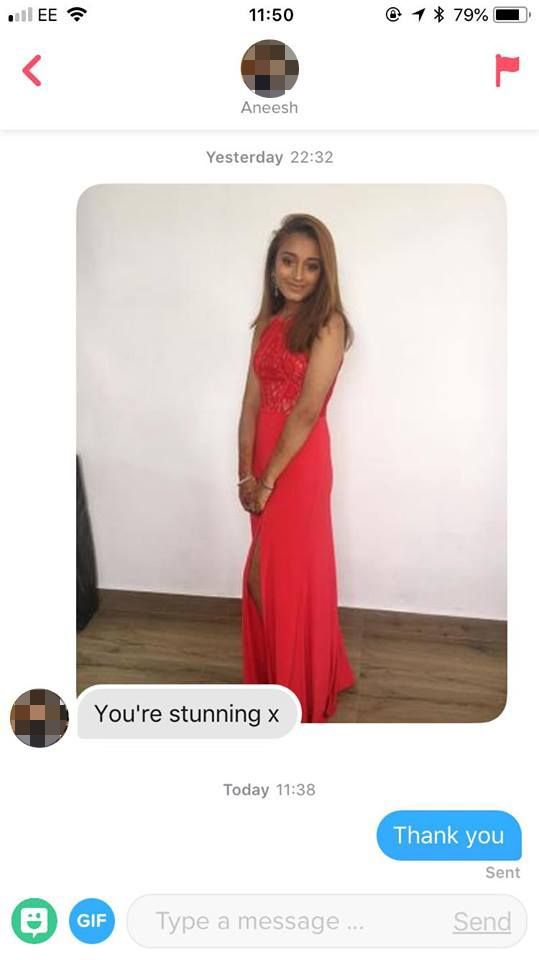 "Let's say thank you!", she insisted. Not exactly a conversation starter but at least my mum never forgets her manners. 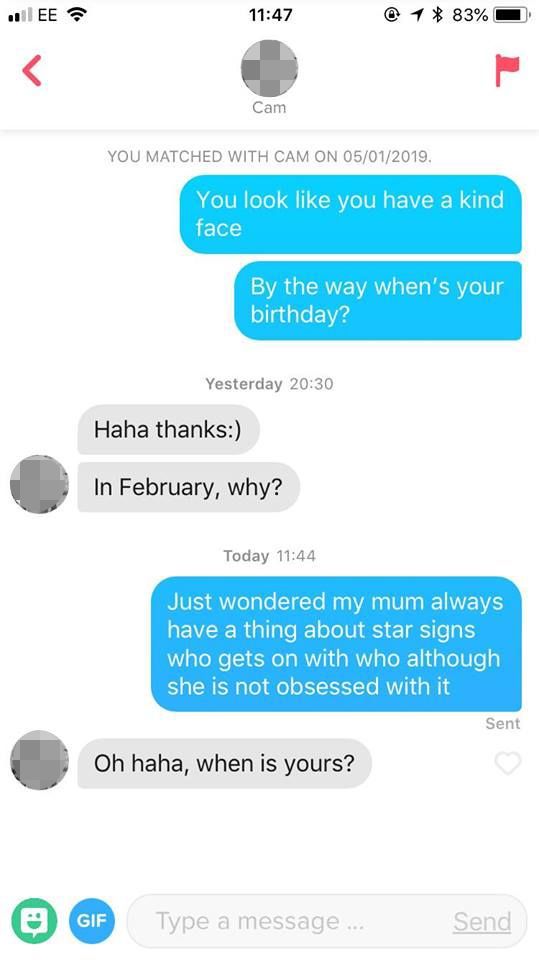 Love was clearly in the air with one of our first matches, who weirdly wasn't deterred by the weird questions or my mum's pretty defensive response. Ngl mum, saying you're "not obsessed" with astrology probably definitely means you are obsessed with astrology. Smooth. But he didn't seem to mind so, again, maybe my mum is onto something? 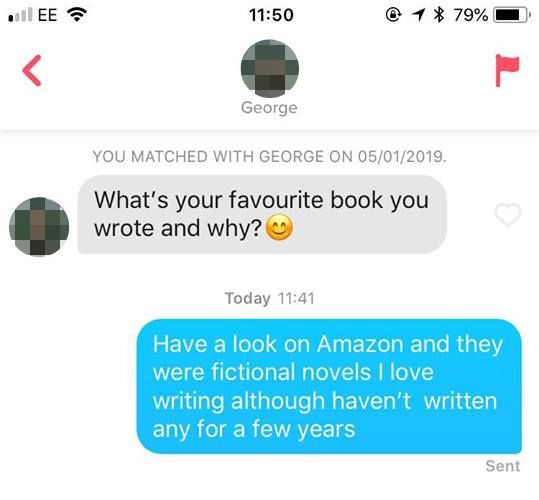 My mum is probably the most proud mum in the world. Our whole house is basically a shrine to me, her only child. She's particularly proud of the fact that when I was about 15 I had a thing for writing incredibly shit, teen angst-style '''novels'''. Naturally, this fact made its way into my bio, hence this guy's opener, and my mum's slightly breathless reply (which doesn't actually answer his question but maybe this is another dating tactic I've not heard of). 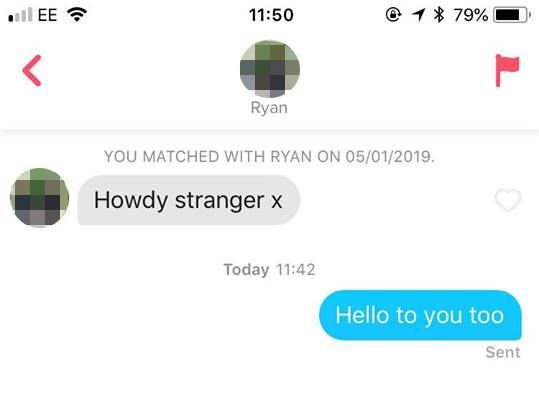 My mum went to get her reading glasses to decipher this message. "What does that mean?". I told her it basically just meant "hi", and assured her that it had no deeper meaning, and so she ploughed ahead in her typically wholesome style.

Will I be going on a date with any of these men? Probably not. Will I be keeping my bio as the strange CV-cum-autobiography my mum created? Again, probably not.

But that’s not to say I learnt nothing from the experience. I learnt that, weirdly, my mum and I have similar criteria when it comes to men’s Tinder profiles. A shit university? Suspiciously few pics of your face? Got your six-pack out? No dice.

I can’t say I’ll be asking men their star signs or letting my mum have free reign on my Tinder again any time soon, but let’s be real…if I bring you home to my mum and she doesn’t like you, you’ll be swiped left and out of my life.

• This is how to get over your ex at university

• Five reasons not to stay friends with your ex