As if dumping Charlie and Ellie from the beach party wasn't dramatic enough, the islanders will now have to decide between keeping Wes and Megan or Georgia and Sam in tonight's episode. In last night's Aftersun, a preview exclusive showed new Jack and Josh rooting for Megan and Wes, while Dr Alex, Jack and Dani back Georgia and Sam. ?

Frankie and Samira made their relationship official last night

The couple made sure we didn't miss any more important moments by making their relationship official live on Aftersun.

Frankie said to Samira: "Since we've come out we've had the best time. So I don't just want you to be my couple on Love Island, but I want to know if you want to be my girlfriend." He then handed her a massive bouquet of flower as she squealed from happiness. If only these two had more airtime, then everything would be alright in the world.

But rumour has it, Frankie and Samira's airport reunion was staged

After leaving the villa to follow her heart, Samira leapt into Frankie's waiting arms at Gatwick. It was the happy ending they – but more importantly, we – deserved. So what if it was all set up for the cameras?

The Sun have spoken to an onlooker who says it was all discussed with a film crew, and even done twice. "They were talking with the cameraman and deciding how best to film them greeting each other," the source said.

"I was a bit disappointed because it seemed a bit fake and staged. You can tell they're into each other because they seemed really happy. But it's a shame they had to film it twice." A kiss filmed twice? Where have we heard this before?

Apparently Georgia and Sam and Charlie and Ellie have also had hideaway scenes we've not seen. Just give us a 24 hour live stream and be done with it.

And it's deffo not Charlie, we checked.

Georgia has acrylics in the first scene when Caroline tells the islanders Ellie and Charlie are leaving, yet in tomorrow's preview of what is meant to be a scene just moments after, she doesn't have any nails on. Very sus.

Uhmm, excuse me but how is the 2nd photo technically filmed only moments after the 1st? You telling me she’s lost all her nails in 10 min ? it doesn’t bother me that Love Island is so staged this year, but it REALLY bothers me that it’s not even staged properly…#loveisland pic.twitter.com/HUmM90RDEJ

Tyla, who is now four months pregnant, told OK! Magazine she found out she was pregnant when she was on a lunch date at Nando's. She said: "I couldn't wait until I got home. When I saw it was positive, I ran back to tell Ross – it felt like the longest journey of my life.

"I was over the moon but part of me was worried too. We haven’t been together very long and we’d only just moved in together. I started to panic that we had rushed."

Last week Caroline revealed her split from her fiancé Andrew Brady and people seem to think she was making sly digs at him on Aftersun and showing him what he's missing by presenting in a tight tiger print mini dress.

Turns out "doing bits" meant something completely different two years ago. Also WHAT is that outfit lol.

Eyal has been lined up for Celebs go Dating

Looks like Eyal has been given a second chance at finding love, because the producers of Celebs go Dating have lined him for the next season of the show.

A source told The Daily Star: "Not only is he a gorgeous model but he’s also a huge character who divides opinion. He genuinely wants to find love and a girlfriend. He would be a major scoop for the show."

On Aftersun last night, Kieran revealed that Alexandra felt pressured to choose Alex over the new boys. Well, if she's trying to play the game – it's working.

Zara and Adam's wholesome out of the villa relationship has got them doing plenty of things together, not least commenting on each other's Instagram snaps. Here, Zara's roasting Adam for not having abs any more. 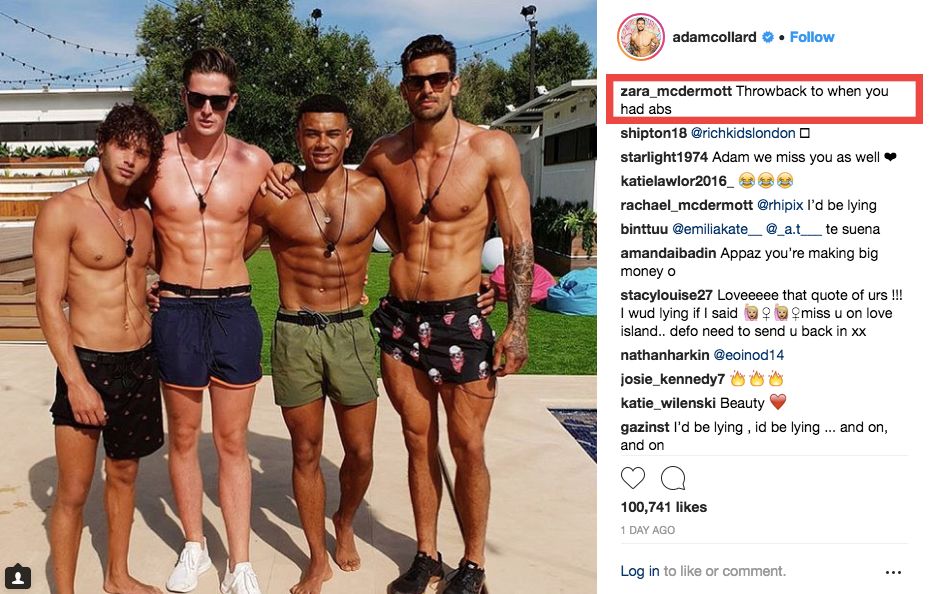 That said, he does fire back. He replied: "Couldn't hear you over my bluetick love.. guess you'll not want your boy then."

No this isn't satire, but Hayley has landed her own politics tv show

After appearing on two BBC political shows, Hayley has impressed TV bosses around the country and will be heading up her own. According to an insider who told The Sun Online, Hayley was a "real breath of fresh air and came across so well."

This is what Jack's teeth looked like before the veneers

It's hard to imagine Jack without his sparkly white teeth, but now we found photos of what they looked like before. They're… different.

Dani's mum revealed on Aftersun last night that her husband isn't coping well with Dani's absence from their family home. Jo told Caroline Flack: "I think he's a bit jealous, he does cry a lot. Every night. He really misses her."

Savannah revealed she fancied Wes the most in Casa Amor and had a connection with him. They snuggled in bed together one night, but the producers decided to not air any of it. She also said you forget the cameras are there and most things which are filmed, get cut from the show.

You have to admit she was pretty funny in this video and completely owned all the jokes made about her looking like Peggy Mitchell and Eyal.

The pair have been on and off since January and insiders have told The Sun Online that Stephanie quit her job when she was approached to be part of this year's show.

She deleted pictures of her and Chris from her social media before she went on Love Island, but a source confirmed: “Chris and Stephanie have been dating on and off for six months. This was an opportunity too good for her to miss out on so she's gone for it.”

• Meet Stephanie Lam: The new islander entering the villa tonight who may have dated Chris Hughes

• The Love Island villa is targeted by FIVE intruders a day