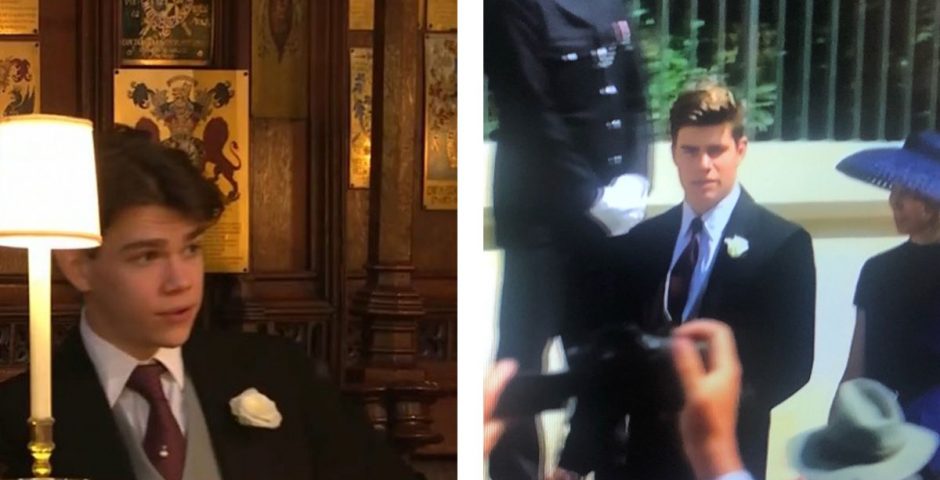 The internet was in meltdown during the wedding

You may have seen Sam and Arthur Chatto at the Royal Wedding last weekend and just like the rest of the world thought: "Hellooooo, who are those royals and are they single?" Let's just say everyone was in meltdown at the sight of these two:

can anyone enlighten me on who this fine piece of art is pic.twitter.com/1ysOTNVNxG

The pair are the grandchildren of the Queen's late sister, Princess Margaret, and her ex-husband Antony Armstrong-Jones, 1st Earl of Snowdon. They're also both students at Edinburgh University in Scotland.

The wedding yesterday was so full of love and warmth and joy !! I wish Meghan and Harry a lifetime of happiness and also want to share some of the sweet love I gathered up inside me with all of you !! So tag someone you ?love? (romantic or plutonic) and let them know why they're special ✨ I'll go first: @artchatto I love you bro (and I'm not just saying that cos you're so big you could squish me ?) Love, Sam x #LETTHELOVEFLOW #ALLYOUNEEDISLOVE #LOVEABOVEALL

Sam and Arthur Chatto attended the wedding last weekend and everyone is dying to find out more about them. Luckily for you, we've already done the digging.

Many congratulations to Harry and Meghan. Wishing you all our love in the future.

Who is Arthur Chatto?

Arthur Chatto, the chiseled 18-year-old and member of the royal family, is a History of Art fresher at Edinburgh University.

The Queen's great nephew and son of Lady Sarah Chatto, Arthur has 78k followers on Instagram and enjoys working out, arctic diving, mountain climbing and playing the bagpipes.

He also previously carried the Queen's train at the Order of The British Empire service in 2012 in his role as a page boy.

He goes out like any other student and visits clubs like Sinners on the reg. Rumour is, he doesn’t do anything without an "entourage of girls around him."

Who wears under armour to a club you ask

Apparently people turn up to events, if they know that Arthur is there.

Arthur graduated from Eton last summer. There, he was a member of the Combined Cadet Forces. And after university, he is thought to eventually join the armed forces.

He's one of the only few members of the royal family with a social media account. You can see a lot of him on there.

And as far as we know, he's not in a relationship either. So don't despair about Harry and Meghan's wedding, because it turns out there are young and single royals you can still hope to marry.

Who is Sam Chatto?

Sam Chatto is a fourth year History of Art student at Edinburgh University and a member of the Royal Family.

all this ☀️ sun sun sun ☀️ been feeding my plants ? and feeding my soul lately !! sending ? love ? all over the world tonight ! ✨?✨tell me where to send the most?! Love, Sam ?xx #lovetrain #allyouneedislove #iseeyou #iloveyou

The 21-year-old is 22nd-in-line to the throne and unfortunately for you, he's not single.

He's been in a relationship with Sophie Pipe for the last three years.

matching white tees ?? matching levels of sTrEsS and cynicism (a most dangerous mix ⚖️☠️?) matching ✨passion✨ for our work ?? matching brain explosions daily ??⚡️ matching bags under our eyes (although sam's are designer and mine are knockoffs ?????) and matching bubbles of excitement for all the adventures to come when diss is all over ?????? ! ! ! ps shoutout to @armstrongs_vintage_edinburgh for my levi's ze most comfy jeans I ever owned ? #shopsecondhand #ethicalfashion #opshop ✨?✨

Sam is interested in yoga, travel and pottery making. He also writes really wholesome Instagram captions to his 40k followers and people can't get enough of it.

During his time in Edinburgh, he has been the President of Diagnostic Society – the university's oldest debating society founded in 1816. Debates are held at black tie events, and senior members have to wear robes.

• Forget Harry, Prince Philip was a DADDY back in the day