University of York pay out £16,670 in Amazon vouchers as compensation for Circuit Laundry disruption

The disruption took place in May

The University of York has compensated students who were affected by Circuit Laundry's disruption earlier this year.

Students were compensated a total of £16,670. This was paid in the form of Amazon vouchers, though the university had initially proposed to compensate students in the form of £5 Circuit Laundry credit.

The disruption took place between the 3rd May 2019 and 9th May 2019. Halifax students had to use the Circuit Laundry facilities in James College.

The disruption was caused by a broken water pump, though the university initially said that an electrical problem had been detected.

According to a Facebook post posted to Wellbeing Officer Steph Hayle's Student Union account on the 23rd May 2019, this meant that over 1,700 students had to rely on the 22 washing machines in James College of which five were broken.

The same post also states that there were 550 formal complaints being submitted to the university. 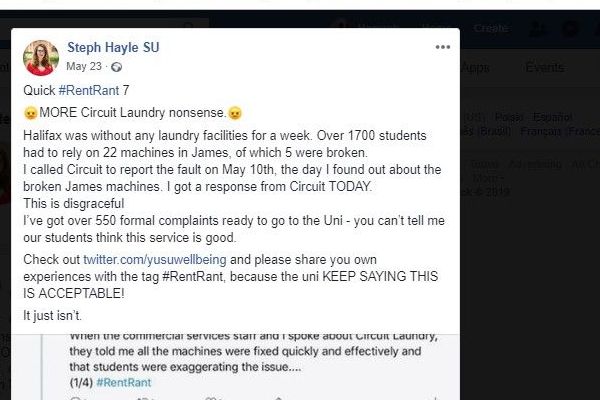 The Halifax College Students' Association told Nouse that they were "very pleased with the result of Steph's campaign. The students deserve to get their money's worth when it comes to laundry services. This compensation goes some way to acknowledging that."

Protect your V on Valentine’s Day

The York Tab has you covered for all things sexual health leading up to Valentine’s Day.

University of York to invest £500k into mental healthcare

It doubles their current annual spending on mental health

Many want the university to provide compensation