A York student has sent racist messages to a fellow York undergrad whilst she was presenting her weekly University Radio York (URY) show.

Rafel, a third year, sent in an anonymous message to radio presenter, Amara Barrett Willett, after she used the word 'hola' in a Facebook status. He said: "If you can say hola I can say n***a."

Amara then invited Rafel to discuss the situation with her, to which he replied: "Sorry I actually have work to do maybe another time my n***a."

Rafel was responding to a Facebook status posted by York third year Amara Barrett Willett publicising her music programme that started with: "Hola comrades", which he had taken offence to.

Amara had gone on air and soon began receiving anonymous messages through the URY message board:

"Please do not say hola if your native language is English. You utter pretender." 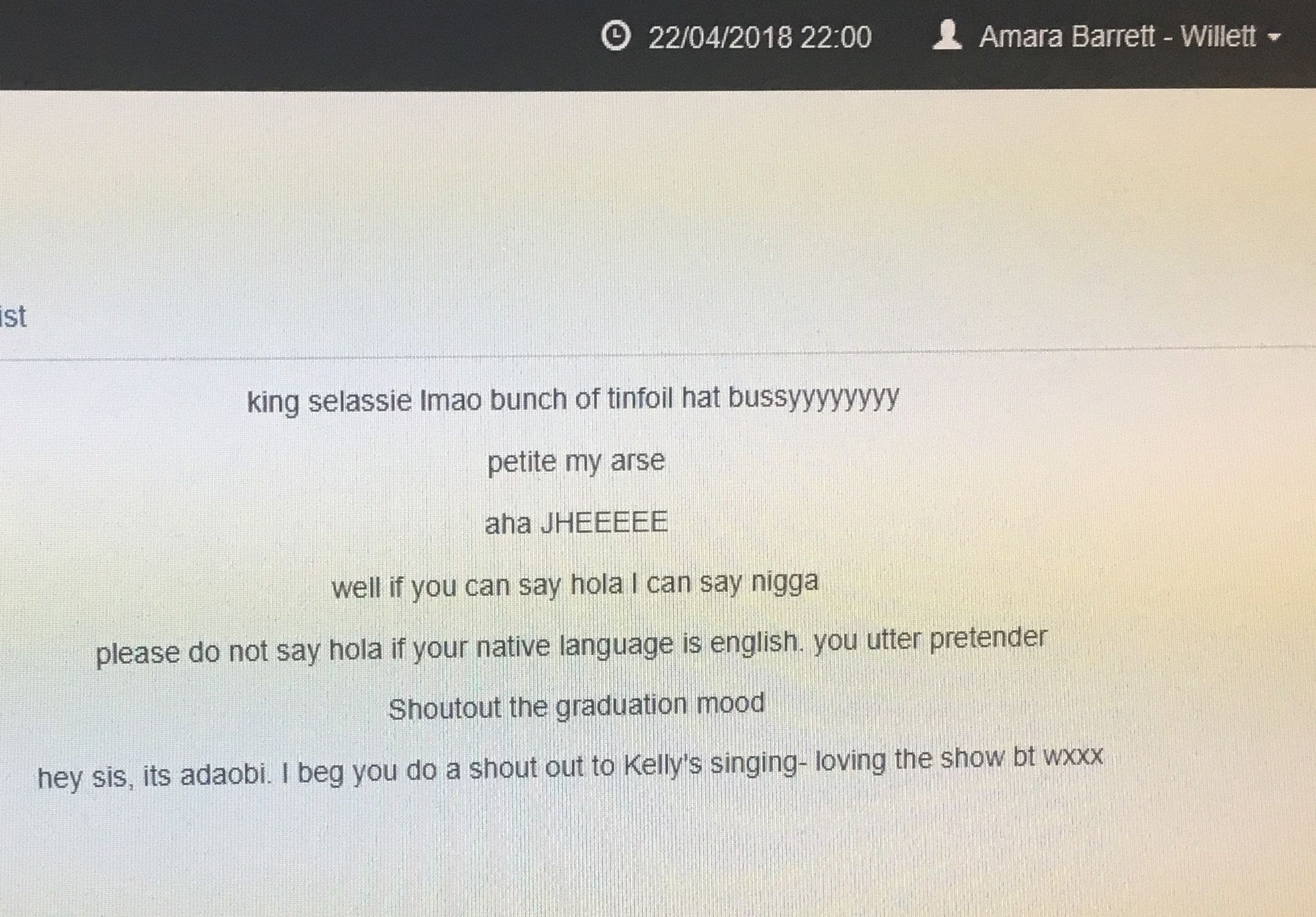 She didn't know what was going on, but could check the location the messages were sent from and could see the person was in the university library, and so was probably a fellow student. Amara told The Tab: "I just wanted him to come and say it to my face."

Amara then checked her Facebook notifications and saw comments below her Facebook post, which were "almost identical to the weird hate messages I was getting on the URY chat." 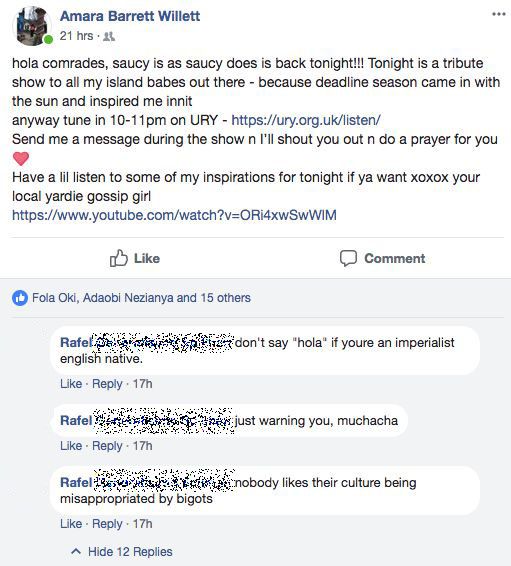 Amara said: "During one of the breaks I had on the show I checked back on my Facebook and saw the comments he was making, he called me a bigot and then in a now deleted post equated me saying hola as it being okay for him to then call me a n***a."

Rafel had commented below Amara's Facebook post, "Don't say 'hola' if you're an imperialist English native," before adding, "Nobody likes their culture being misappropriated by bigots."

Amara then invited Rafel to discuss the issue with her, adding, "Don't ever ever think you can ever say n***a."

Rafel replies: "Sorry I actually have work to do maybe another time my n***a." 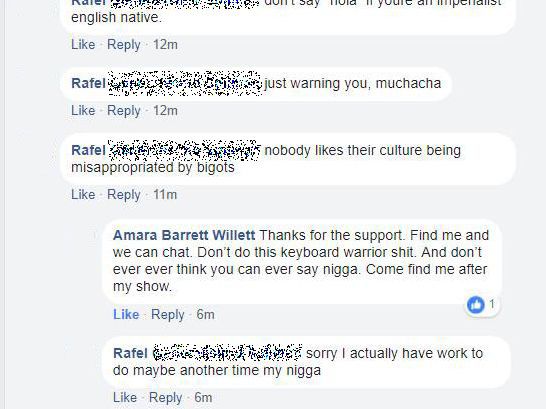 Amara said: "I could tell from his comments and from knowing him through other people that he’s a troll so this is what it probably was but I don't deal with the racial slurs. For me thats not a free-speech joking thing."

Amara posted another Facebook status calling Rafel out for what he had said, saying: "If you ever lose your mind enough to think that you as a WHITE n PROUD caucasian person can come and call me a n****r over the internet. Please find me and say it to my face. I dont care if you typed it with a soft ‘a’ or a hard ‘er’. My point still stands."

Amara says Rafel commented on this post "claiming innocence". Rafel commented: "I dunno but the people in your songs used it so I assumed it was a gesture of solidarity,"

Rafel then said: "I was being ironic. I didn't INTEND to stoke actual controversy, surely we still believe in freedom?"

Rafel told The Tab: "It's just a small way of defending free speech from the safety of my university i suppose.

"I'm sorry, I'm a fellow Jamaican dance hall enthusiast, especially Reggaeton, and i just got a bit carried away listening to her radio show. I thought we were friends and that she would forgive a blunder and I sincerely apologised to no reply.

"We shouldn't criminalize speech acts. Free speech is a principle we should defend as prospective owners of blue passports, I think. Please forgive me. She also associated the Spanish language with communism which seems pretty silly, I don't know, especially for someone from London.

"I can't pay you off i'm afraid so i guess you'll have to ruin my life for a while but i hope i can finish my philosophy degree. I didn't sleep last night i'm sorry if this message seems incoherent.

"I also spelled it n***a which I was under the impression had friendly connotations. I guess i'm not as clued in as I thought."

Amara said: "We are not friends, that boy does not know me beyond us walking home together once after pulling a shift at York Vision."

Amara says the York BAME Officers reached out to her immediately regarding the incident and are filing a report on her behalf.

The YUSU BME Officers, Nayomi Karthigesu and Hannah Joseph- Asikhia, told The Tab: "Obviously we do not condone this kind of behaviour, and find it disgusting but not surprising that this has occurred.

"There have been several incidents similar to Amara’s occurring at this university.

"Beyond this, people still sing the word when it is played in the club and throw it about in daily use showing what gross ignorance is still prevalent in what you would consider to be an 'educated environment'.

"We did not come to uni to suffer this abuse and the fact that we do shows that York has a long way to progress.

"The truth is, this university is an environment that encourages hate speech, discrimination and racism.

"We pledge our full strength and solidarity with Amara and will provide her with any help she would require."

University Radio York told The Tab: "We are incredibly disappointed to hear that this incident has occurred.

"Racism of any sort is not tolerated within URY or towards our members and we are deeply concerned that our online messaging system for shows has been used to harass one of our members.

"We will be pursuing the matter with YUSU and, with their advice, we will be taking steps to help presenters avoid such messages as well as banning any abusive messengers from sending any more messages during a show."

A University of York spokesperson told The Tab: “The University is aware of the incident and an investigation is taking place.

“The University does not tolerate any form of racism. Any student who is found to have breached the University’s code of conduct will face disciplinary measures and possible police action.

"The University celebrates and values diversity. The Equality, Diversity and Inclusion Strategy sets out how the University is creating a positive environment which is fair, welcoming and inclusive.”