Students voted en masse against changes, which the SU then did anyway

Nottingham’s SU president said the controversial SU reforms wouldn’t “all go in the bin” as far back as December, even if students rejected them.

With UoNSU in crisis after forcing through changes which students overwhelmingly rejected in a referendum, The Nottingham Tab can reveal the intention to ignore the result was being discussed at SU meetings last term.

“It won’t all go in the bin, because there is a lot of investment in it and we need it,” said Pheasey in an SU meeting in December.

In the aftermath of the referendum, one SU officer has called it a “shitshow”, with another branding it “grossly undemocratic”.

With hashtags like #giveeveryoneavoice, officers encouraged students to approve a new “democratic review” of UoNSU. The most notable of the proposed changes were a shake-up to the officer team – replacing President with a “Union Development Officer” role, and introducing a “Liberation” officer. 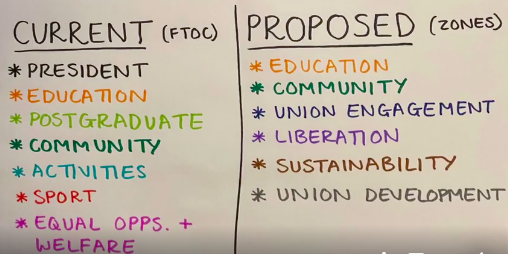 UoN students voted to reject this in the referendum, with 71 per cent of the 1300 who voted saying “no.”

Yet, after the referendum, the union’s Democratic Procedures Committee – a body of ten elected students – decided to force the changes through anyway and create the two new roles.

However, comments made in December show the SU had plans to force the changes through, even if students rejected them.

In a Scrutiny Panel meeting on 10th December, Pheasey is asked about “fail-safes” in the event the referendum did not go his way.

“If the referendum doesn’t pass – which hopefully it will because we will have done the second phase of consultation properly, which will cede into changing the proposal – some stuff will go through Democratic Procedures Committee,” Pheasey says.

“And we will then have a look at what we did wrong, if we did something wrong, or whether people just don’t like it. It won’t all go in the bin, because there is a lot of investment in it and we need it, so it will be about reviewing what went wrong.”

The panel also slammed Pheasey as out of touch, noting: “There are serious concerns that James’ lack of personal engagement with the student body and current student issues.

“For example, there was a lack of a cohesive statement from the Students’ Union – as officers – about the UCU strikes. The panel would like James to be more present on the whole and use social media more efficiently. While the panel noted that James has been more active engaging with Part Time Officers and Networks, they want to see him work further with other Full Time Officers and support their achievements in a visible way.”

Keep up to date with everything your new full-time SU Officer team are up to over summer by following their social media accounts 📱 You can find them here: www.su.nottingham.ac.uk/officers

In the wake of the decision to force through the changes, Notts SU has broken down into crisis.

Jacob Collier, the current SU Community Officer, said on Facebook: “It is an insult to the referendum process that we’ve just been through for changes to the officer team to be made now and sets a dangerous precedent for when referenda fail in the future.

“I believe what has happened is grossly undemocratic and not how we should operate as a Students’ Union. I will be writing to our trustees to ask them to formally review these decisions as there have been serious irregularities in the decision-making process and a huge reputational risk to the SU in ignoring a referendum result.”

Students have reacted with anger, believing they’re being ignored. Tyler Pringle, a third year Politics and American studies student, voted for the changes but sees the decision to do them regardless of the result as reflecting badly on the SU. He told The Nottingham Tab: “It is clear that these changes have been made undemocratically.

“There is a culture in the SU’s leadership that cares little for the concerns of the student body who they were elected to represent, instead concentrating more on their own personal careers and mandates.”

Polly Moss, an English third year, told The Nottingham Tab: “Despite the overwhelming vote against the new model in the referendum, the fact that the DPC has made changes anyway seems undemocratic and unclear to me. The SU are hugely at risk of growing disillusionment and mistrust between themselves and the student population.

On Facebook, Pheasey responded to the controversy, outlining the changes and insisting “the majority of you were not ready for this and we respect that”.

He wrote: “Thanks to everyone who voted in the referendum. This was the first quorate referendum in a good while and that, in and of itself, is exciting. While I’m disappointed with the result, I’m happy that we had an opportunity to present you with a model that maximised student voice and student leadership in the Union and I’m thankful for the effort and passion that so many people have put into the Democratic Review project so far. I’m happy with the level of engagement, consultation, and proactive interest that we’ve had from students, and I hope the future of the project maintains this. I’m sorry that we, that I, didn’t get it right for you this time.

“As per the referendum result, our current system will continue to operate. There will be no radical overhaul, nor complete reshaping of the system. The majority of you said you were not ready for this, and we respect that. It is now the Union’s duty to focus on making sure that the system we have now is as operational and effective as we can make it. We must strive to ensure that the system you chose addresses the needs of students and adapts to accommodate these needs.”