She wants to ‘humanise people’s experiences’ over the Christmas break

In spirit of the festive season, a Nottingham student has begun a charity drive collecting clothes, food, and toiletries for Nottingham's less fortunate during the cold and lonely Christmas period.

In a post on the Buy/Sell Notts Facebook group, Lu Lu reached out to the students of Nottingham's to collect warm clothes and funds to make food for the homeless. Her aim is "to raise consciousness of the situation in the city", she said. 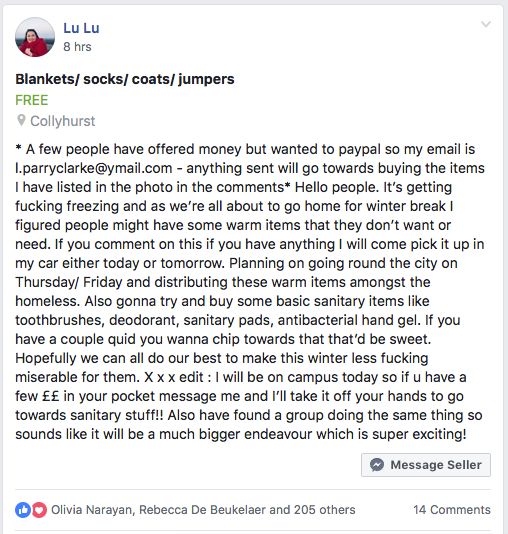 Lu Lu's original post on Buy/Sell, asking for donations and help in the last week of term this year

Lu Lu's idea of giving back this Christmas begun when she saw a video on Facebook of a person in New York giving gifts to homeless people on the street.

"I saw the Facebook video and I was thinking about what I could do in Nottingham to help the homeless community here," Lu Lu said. "With the commercialisation of Christmas, consumerism is amplified during the festive season. People buy frivolous things during this time that they throw out in the new year."

Lu Lu posted on the Buy/Sell group, asking for warm clothes that she could donate to the homeless. After a food shop at Aldi and Poundland, she had the idea to make food as well as collect toiletries.

She will be going to the Nottingham city centre handing out food, clothes, and toiletries to the homeless on Friday.

To support the charity drive, Lu Lu is currently accepting: