Because if you haven’t attempted vegetarianism as your New Year’s resolution, did you even go to uni?

Everybody seems to go veggie at university. Whether it’s your classic vegetarianism, pescatarianism or veganism, we all know a few people who say that philosophy lecture on animal ethics really changed them. I’m not mocking, after writing an essay that was highly critical of any moral justification for the eating of meat, I myself realised that I needed to bite the bullet, stop being a hypocrite and give up my one true love, spaghetti carbonara.

I have to admit, I still eat fish (tell me more about how I’m a terrible person for calling myself a vegetarian when I dare to order anchovies on my pizza) but it can still be really hard sometimes to resist a double stacked cheeseburger with bacon when everyone else is getting one.

I miss meat so much. I’m a ridiculously fussy eater and I don’t like peppers, mushrooms and aubergines so I’m pretty screwed when it comes to vegetarian options. This is why I decided to try the different meat alternative products that Quorn produce and rate their look, taste and similarity to the meat it is attempting to imitate, if it’s good enough for Mo Farah, then it’s good enough for me. Each product will be marked out of 20, five points for look, 10 for taste and five for similarity. By the way, I’m not going to bother rating the vegan Quorn options, let’s just assume they all get zero.

These chicken nuggets are straight up the best chicken nuggets I’ve ever had – all the chickeny taste and none of the ethical turmoil. They have a tasty, peppery coating  and the nuggets themselves genuinely taste like chicken. At first, I assumed that the six months that I hadn’t eaten meat had affected my tastebuds and I was just craving chicken so much that I convinced myself that they actually taste good but I did a taste test with my mates and none of them could tell that it was Quorn. It’s a massive yes from me. 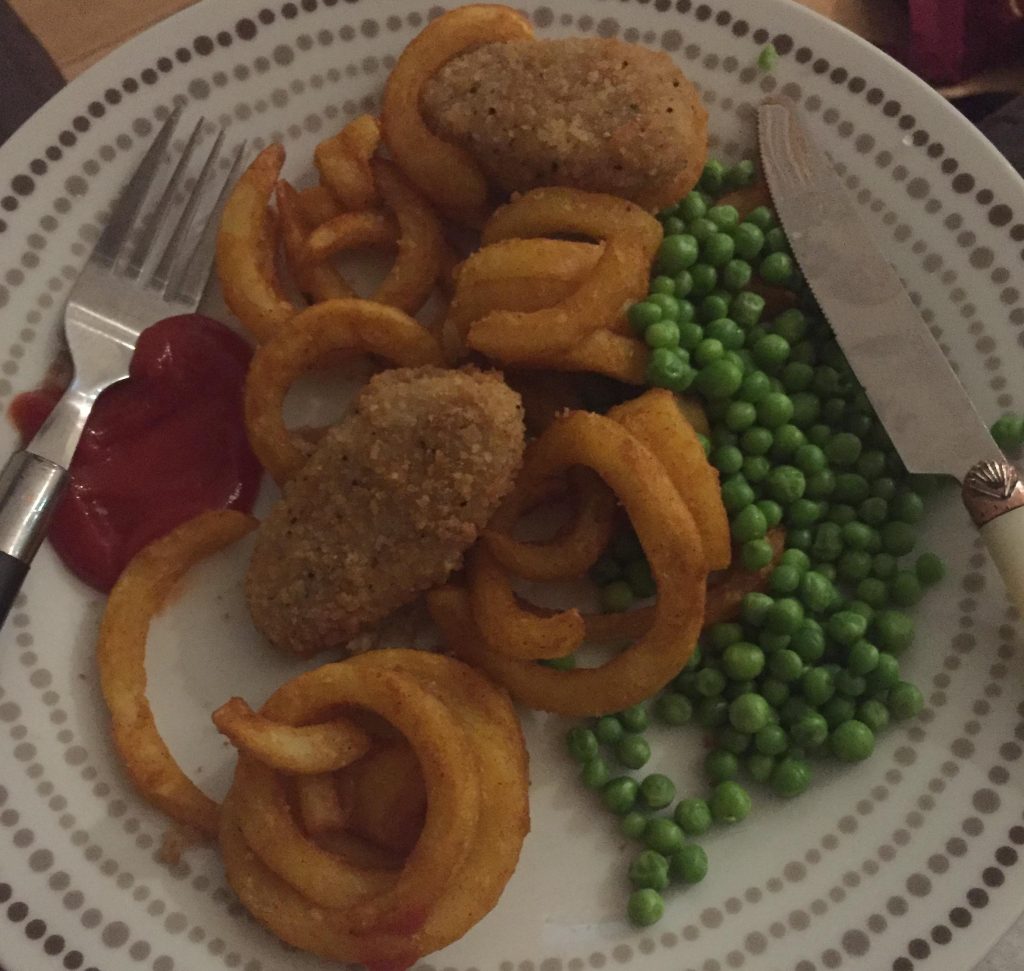 Vegetarian sausages are, by all accounts, horrible. The Quorn version is no exception. Mushy and doughy, not dissimilar to those horrible sausages you can buy for 20p in Sainsbury’s. Although, come to think of it, I’m not sure if they contain any real meat either. Incredibly salty so you end up gulping down more water after eating these than a raver at WHP. Would not recommend at all. If you want a substitute for your bangers and mash I would try one of the brands that doesn’t try and replicate the real thing.

You vs the guy she told you not to worry about pic.twitter.com/m1tRLItvLT

I started eating Quorn’s frozen chicken pieces way before I became a vegetarian. They are amazing in a stir fry because their texture means that they soak up all the sauce and flavour and just take on the flavour of whatever you are cooking but add a nice texture and something different, great for students as a cheap alternative to an actual chicken stir fry. The texture, unlike the chicken nuggets isn’t that similar to chicken, mainly because if you have it in a sauce it absorbs the moisture differently to how chicken does. I definitely recommend these to people who want to try meat-free-Mondays or to those who just want to save a bit of cash.

Realistically, the only time most people eat burgers at home is at a barbecue when they’re drunk and in a good mood. This immediately means that the standards are massively lowered, therefore I don’t need to be particularly harsh. As the high brow, investigative journalist that I am, I drank a bottle of wine before this taste test because I truly am committed to giving the people the truth.

These burgers are much the same as any other, sort of meaty in texture and taste but to be honest once pushed inside a bun, slathered in ketchup (or mayo – I don’t judge) with a slice of cheese to go on top, who really cares? As opposed to being identical to the taste of burgers they allow vegetarians the same experience and that is all that matters when it comes to barbecue food. None of it is actually going to be that great because the sausages will be burnt, the chicken will be underdone and Sam will be putting us all off our food anyway because he’s a lightweight and has already vommed up his king prawn skewers. These burgers are fine.

Bolognese, shepherd’s pie, lasagne – need I go on? Mince is so essential to cooking those meals that make you actually look forward to the coldness of winter because you can eat those stodgy, steaming hot dishes that your mum makes while you’re home for the Christmas holidays. This is one of the only Quorn products my mum actually cooks with which is kind of a five star rating in itself.

For this test, I decided to make a lasagne and it was so. damn. good. Similar to the chicken pieces, the fact that you put it in a sauce means that the texture is slightly different to the original product because of all the moisture it absorbs but it still makes all the difference to a ragu. You add it to any sauce for 10 minutes before you serve it for the best results making it perfect for bolognese but as lasagne goes in the oven for about 45 minutes it isn’t as good as when it only has a relatively quick blast of heat.

Apparently, bacon gives you cancer. This is one of the only things that saves me from falling into a pit of despair every time that I think about the fact that I can no longer enjoy a BLT. I expected very little from the Quorn version of bacon. I bought it frozen but I would definitely recommend buying it chilled as you have to defrost it in the microwave and, similar to when defrosting meat, it’s impossible to time it properly and I ended up half cooking the rasher. Uncooked it is the colour of spam but it’s cute how they make it the same shape as a proper rasher of back bacon, none of this American streaky bacon BS.

Whilst it was defrosting in the microwave the smell of smoky bacon flavoured crisps was overwhelming which was slightly worrying but I ploughed on, determined to give it a chance. I fried it, even though the cooking instructions implied that you should either oven bake or grill it – perhaps this was a bad idea because the fake-on quickly blackened.

I buttered a roll (cue argument in the comment section about whether it is a roll, a bap, a bun etc.) sliced up some avocado, slid the bacon on top and added ketchup. This combination, I believe, is the only way to go. The crunchy smokiness of the bacon, whilst different to the pork that I was used to, definitely went well with the soft avocado and bread. However, this fake bacon pales in comparison next to the real thing when it comes to taste and especially texture. 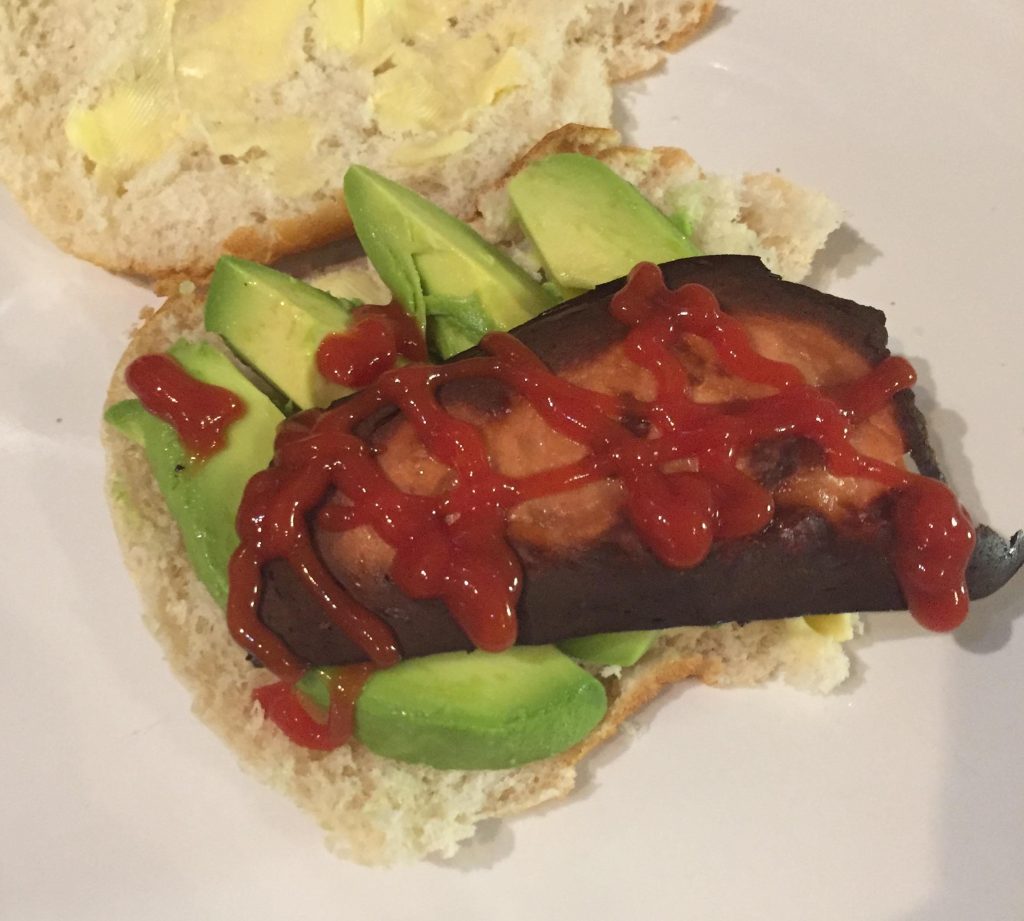 This is it, the big one. The roast dinner replacement. I tried this one out during the most important roast dinner of the year, the Christmas lunch. It comes in a little sausage shaped package that you pop into the oven for just under an hour and yeah, it isn’t as good as chicken but HEY, it damn well tries.

The fact that I was halfway through eating this before I remembered to take a picture is in my mind a good sign. It was nice with the veggie gravy that I had brought along with me to my family’s christmas meal and whilst it was a weird shape, I could probably kid myself that it was meat (not sure which kind, though). It was moist and had a fairly close to chicken texture and made me feel like I could enjoy my meal as much as the rest of my family whilst also retaining the smugness that all vegetarians enjoy whilst watching others gorge on the flesh of dead animals. Sorted. 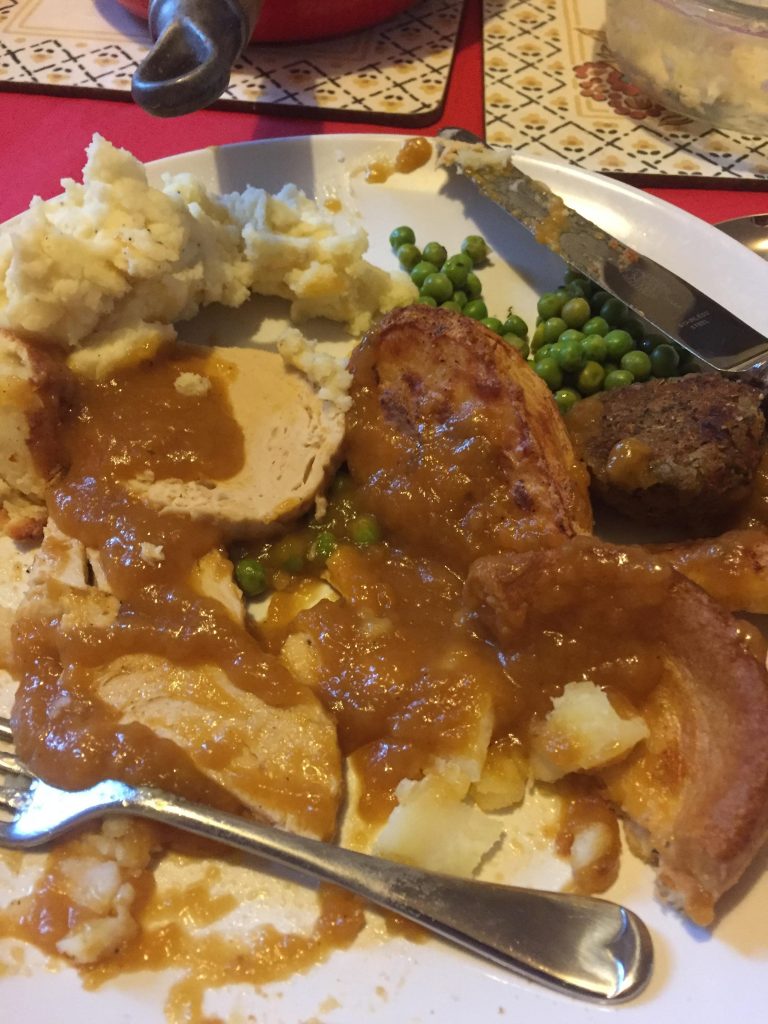 I kind of forgot to make this look presentable

Basically, it’s pretty difficult to get a product with no meat in it to taste like it has meat in it. Who’d have known?