‘What do we want? Answers! When do we want them? Now!’

Students protesting outside the Provost's office today demanded an explanation for why UCL had allowed The London Intelligence Conference, a secret eugenics conference which featured a white supremacist as a speaker, to be hosted at the university.

Students waved placards with "Fuck Eugenics" and "Decolonise UCL" on them, and chanted: "Shame on UCL." But the Provost refused to come outside his office and answer the protesters questions.

The protest was lead by Ayo Olatunji, the BME Sabbatical officer, who claimed that UCL was "not a safe space for anyone who is not white." He talked about the "physiological violence" BME students faced from racism. 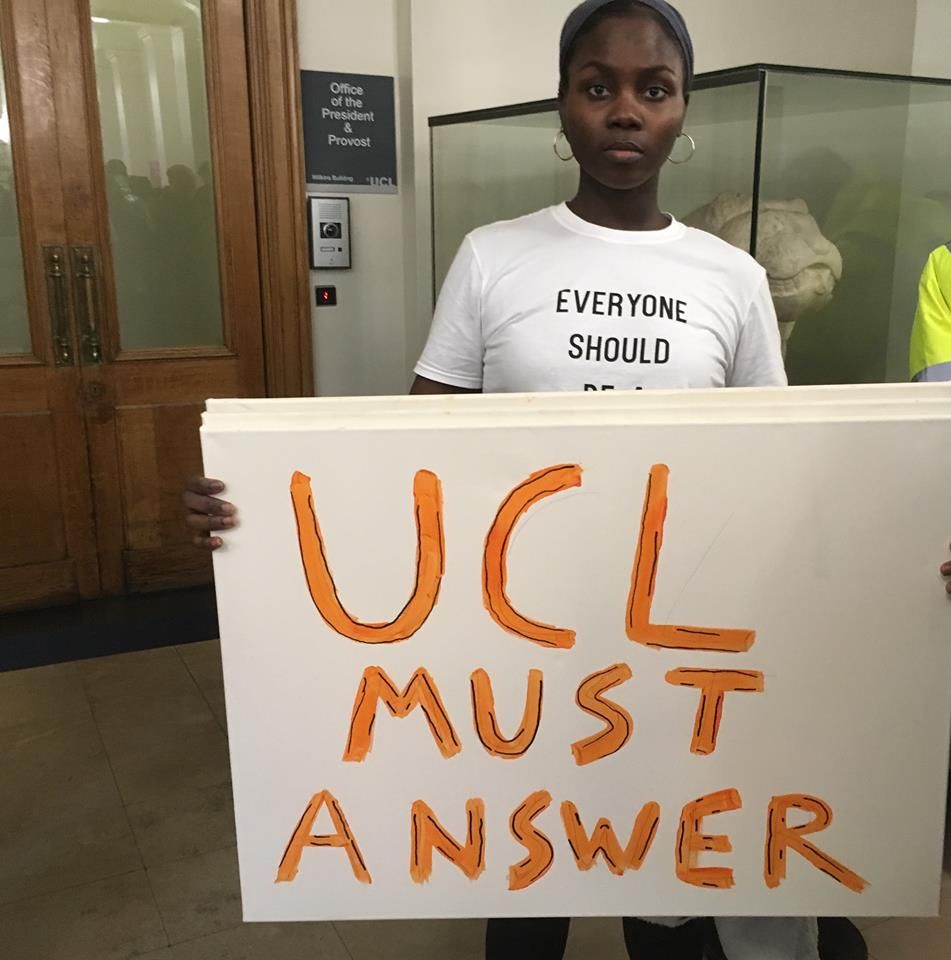 Criticising the university's response, Abeni, a 2nd year Neuroscience student said "I think it is really ridiculous that the Provost has nothing to say. He needs to do something he is responsible for all students and yet seems to ignore BME students. We pay fees we should be able to feel safe and secure at UCL."

The London Intelligence Conference took place last week at UCL. The secret conference, focused on the links between race and intelligence, was organised by honorary senior lecturer James Thompson. 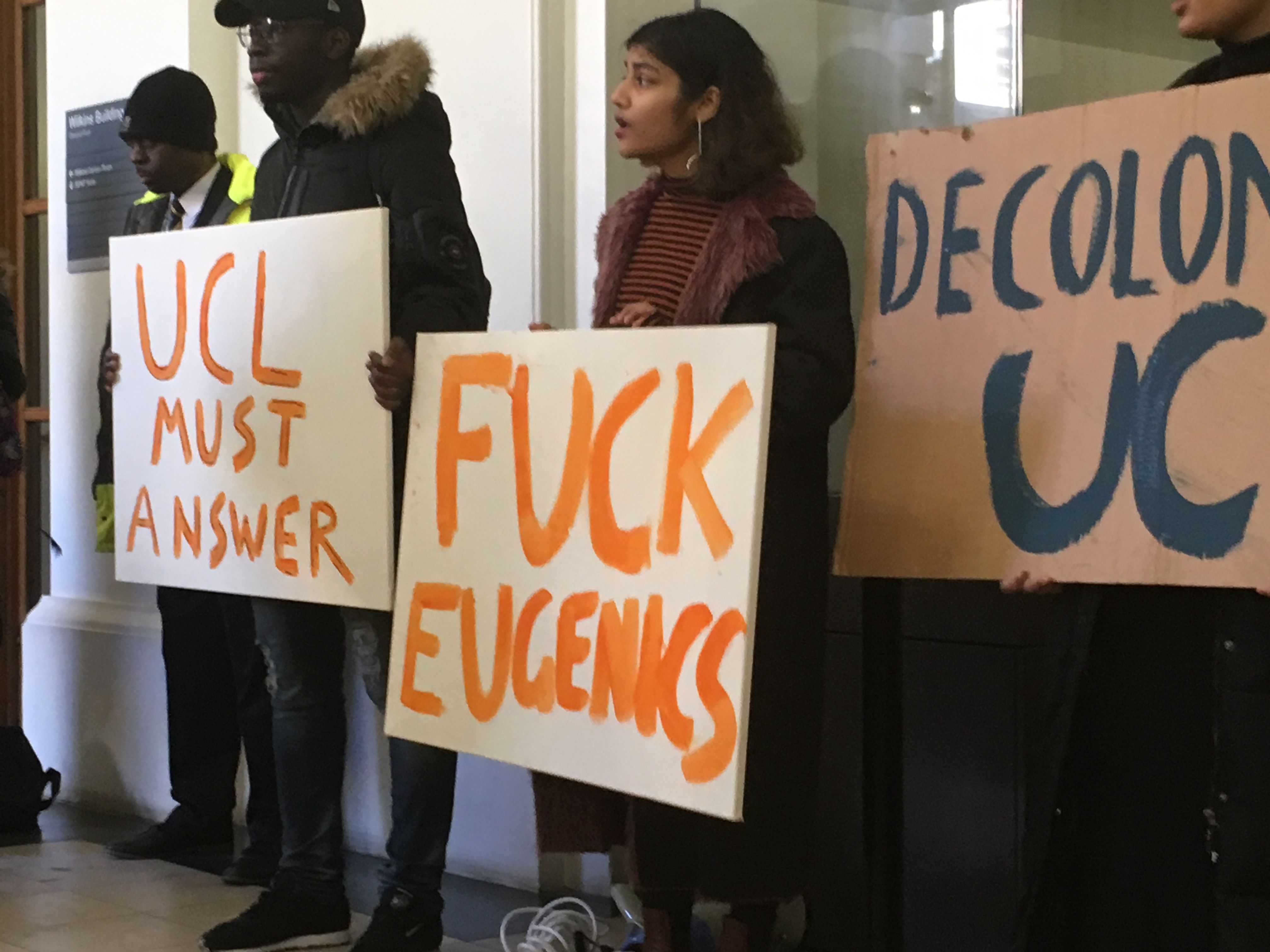 UCL claims not to have know about the conference and in a official statement released last week said: "UCL is investigating a potential breach of its room booking process for events."

The conference may also have breached the Government's Prevent regulations regarding extremism on campus. 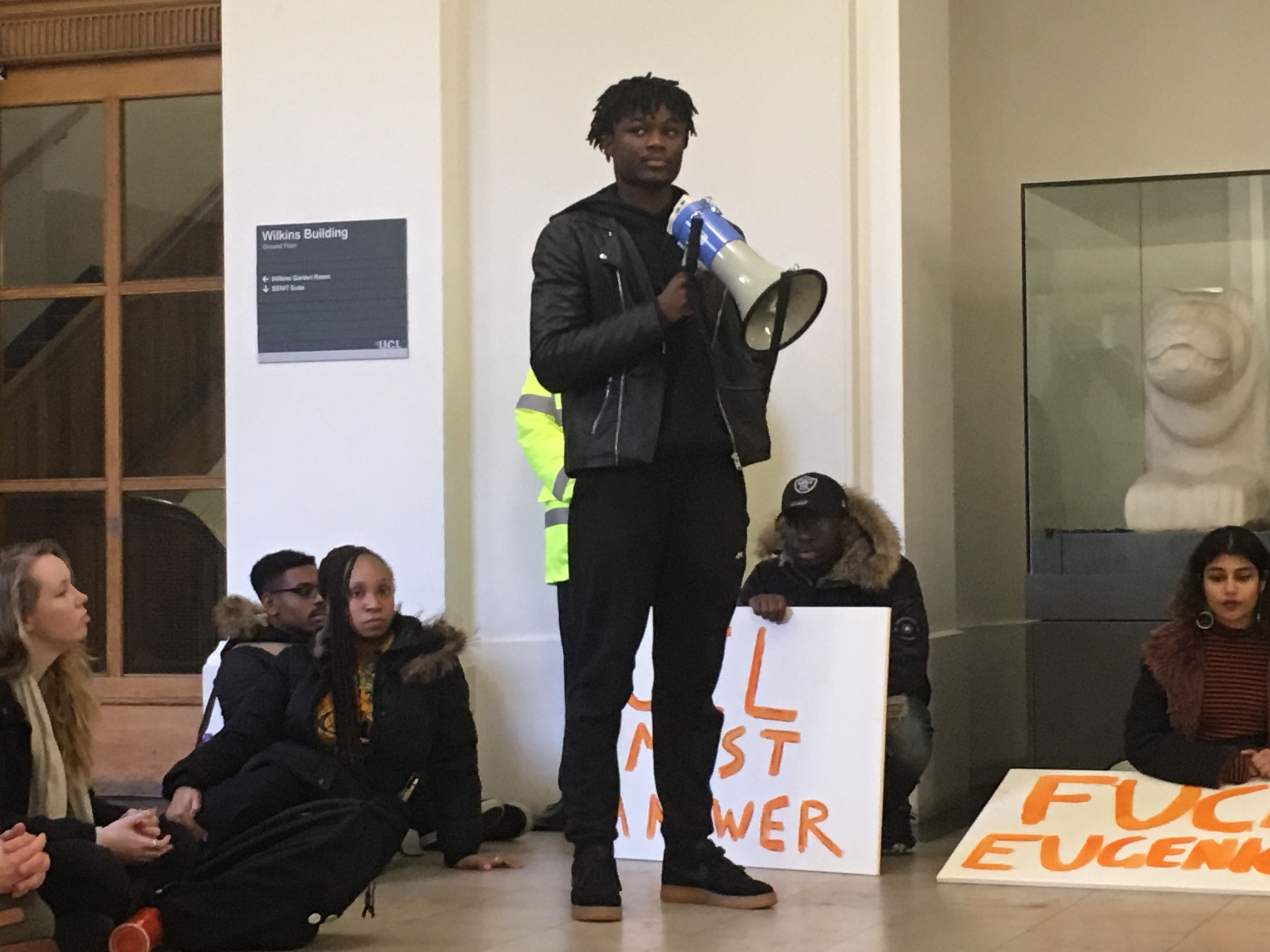 Other speakers included Saen Wallis, the vice-president of UCU, who made it clear that: "Eugenics is not a theory but a set of politics which is about white supremacy and colonialism. " 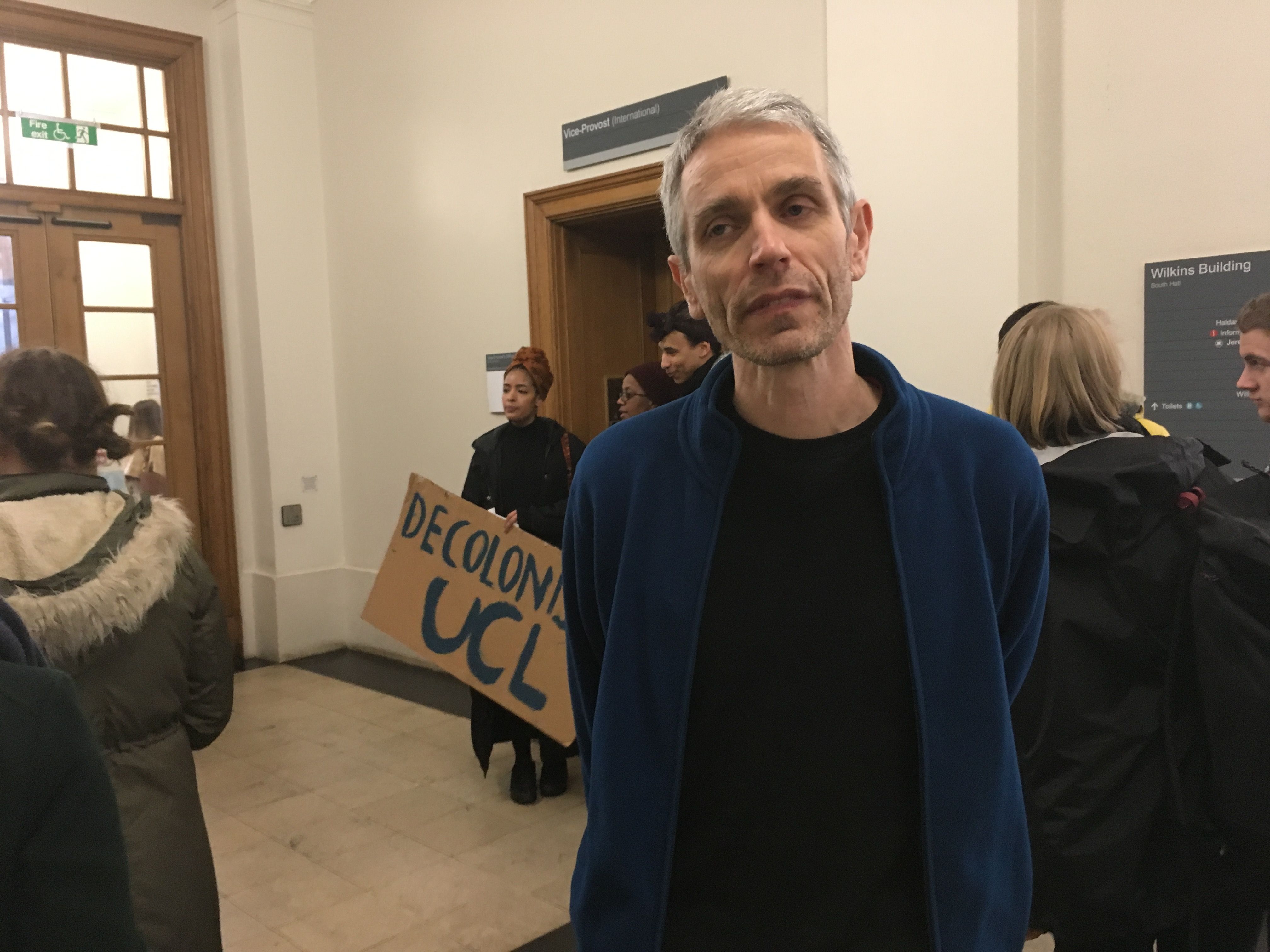 When asked by the Tab why he had come to speak at the demonstration Sean told us: "My position is simple. What we know about the conference was that it was a gathering of neo-Nazis. My union's stance is that there should be no platform for fascism… fascism is a knife held at the throat of democracy. Everyone should stand against it."

There was a large turn out to the protest of about 50 students. Including some students from SOAS. Ben, a second year Anthropology student from SOAS, explained he had come to UCL because "Fascism is a structural issue, it's not just confined to UCL." 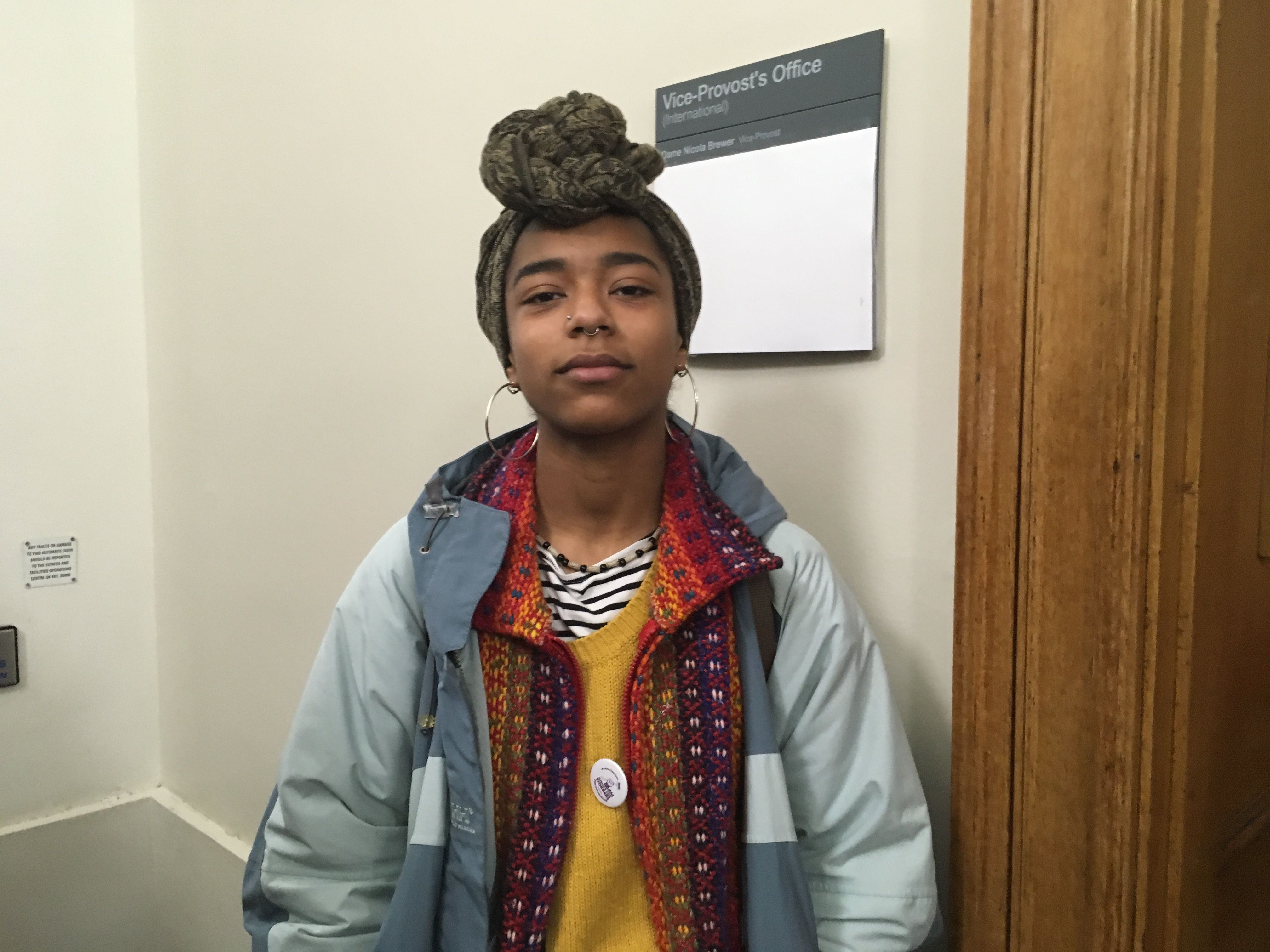 Many of the students at the protest had very personal reasons for being there. When The Tab asked Talya, a first year Anthropology student, why she was at the protest she simply said "Because I respect my existence."

Another student, who wished to remain anonymous, told the Tab: "In the 1930's and 40's conferences like [The London Intelligence Conference] lead to actions that lead to all my family members but one being murdered… There is no space for fascism, racism and, Eugenics."

UCL has been historically tied to Eugenics, the scientist who coined the term, Sir Francis Galton, left his fortune to UCL. His name can still be seen around the UCL campus.