The assorted flock of suits and blazers crammed into the Pearson lecture theatre and, with the accompaniment of several bottles of wine, cheese and crackers, sat down to hear Dr Fox hold forth on a range of issues, including the problems of the economy, Europe and Scottish independence.

Sitting relaxed on a table at the front of the lecture theatre, Dr Fox made a range of quips at the expense of Nick Clegg, Alex Salmond and the Nobel Peace Prize.

He referred to Salmond as one who was “incapable of reading”, while Nick Clegg was lampooned over his party conference speech to a chorus of ‘hear hear’s around the room.

Asked a question about his views on the EU being awarded the Nobel Peace Prize, Dr Fox replied, “who says Norwegians don’t have a sense of humour?” 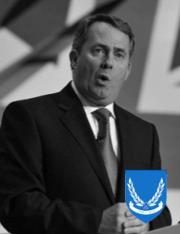 A vehement Eurosceptic, Dr Fox repeatedly emphasised the need to maintain the ‘special relationship’ with the USA as opposed to constantly worrying about Europe, saying that Britain should have “purely economic ties with Europe”, and calling the Euro, “a spectacular own goal”.

There was a tetchy moment at the end of the Q and A session however when Dr Fox appeared uncomfortable answering a question from the audience about the potential future leader of the Conservative party.

After an embarrassing week for David Cameron, Dr Fox said that he preferred to put his energy into policies rather than the personal politics which so often dominate in Britain. Dr Fox stood for the Conservative leadership in 2005, losing out to Mr Cameron.

The Suit and Blazer brigade duly headed off to Potion for drinks afterwards. Dr Fox having initially declined an invite when asked by the President of Tory Soc, joined the society at Potion later in the evening.