Awkward pauses or dying of laughter? Find out if the Drama Society’s freshers’ plays managed to push all the right buttons in this review.

If ever you’re struggling for something to do one evening, I strongly recommend that you go and watch one of the Drama Society’s many productions at the Garage Theatre. The Garage Theatre Workshop is a small yet practical performance space perfect for the fringe plays produced there. Cosy and intimate, you are always able to connect to the drama.

Thursday night found me in the audience for two of this year’s Freshers’ plays. The third play ‘The Lieutenant of Irishmore’ was shown on Friday and Saturday night. Put together in little more than five days by a company of freshers raring to show off their talent to their theatrical peers, in such a short space of time one would assume that this group of newbies might struggle to produce something watchable. Nevertheless they thrived under the pressure and captivated an audience who had queued outside for half an hour in anticipation.

The first hour and the first play saw us transported back to the 50’s Soho nightclub scene in Jezz Butterworth’s 1995 black comedy, ‘Mojo’. The plot centres on a group of nightclub workers thrown into turmoil when their boss is murdered by local gangster Sam Ross. Directed by Natalie Denton and Philippa Douglas, the play explored dark themes of drugs and violence whilst balancing them with lighter comedic moments, which the performers handled rather well. That isn’t to say there weren’t a few hiccups. On occasion the pauses between lines were just a little bit too long, whilst the play’s dramatic climax seemed slightly rushed.

However nerves certainly didn’t seem to be an issue for the performers. The performer in the role of Skinny was really quite funny, with an accent rather Frank Spencer-esque that never ceased to make the audience giggle. The actor playing Potts had such a dominant stage presence that it was hard for the audience not to be drawn in by his confidence. However the stand out performer in this particular play was the girl playing Baby, the nightclub owner’s psychotic daughter, who bewitched the audience with her disturbed nature, provoking a cross between shocked gasps and nervous laughter.

The second of the two plays was slide-splittingly funny. My stomach muscles ached after watching Christopher Durang’s comical short play, ‘The Actor’s Nightmare’. Inspired by dreams actors often have in which they are performing in a play yet can’t remember their lines, the plot revolves around George Spelvin, an accountant who finds himself in a theatre about to go on stage with absolutely no recollection his lines. What follows is a series of ‘scenes’ from different plays in which George struggles to follow the script or the story and ends up hilariously ad-libbing for the entire ‘scene’. The brilliant climax of the play leaves the audience guessing the outcome, as it comes to an ambiguous end. Director Trevor Anderson perfectly cast the production with a group of slick, quick and thoroughly entertaining individuals who came together to provide the audience with an hour of painfully funny and professional theatre. It would be hard to pick out one individual in a cast so perfectly in tune with one another, and even the one forgotten line was hilariously covered with some quick thinking ad lib. However, the star of the performance and indeed the night was most definitely Vincenzo Monachello in the role of George, whose cluelessness, panic and humorous soliloquies were a delight to watch. His ability to captivate the audience when alone on stage was outstanding, and the other performers evidently benefited from having such a talented lead. 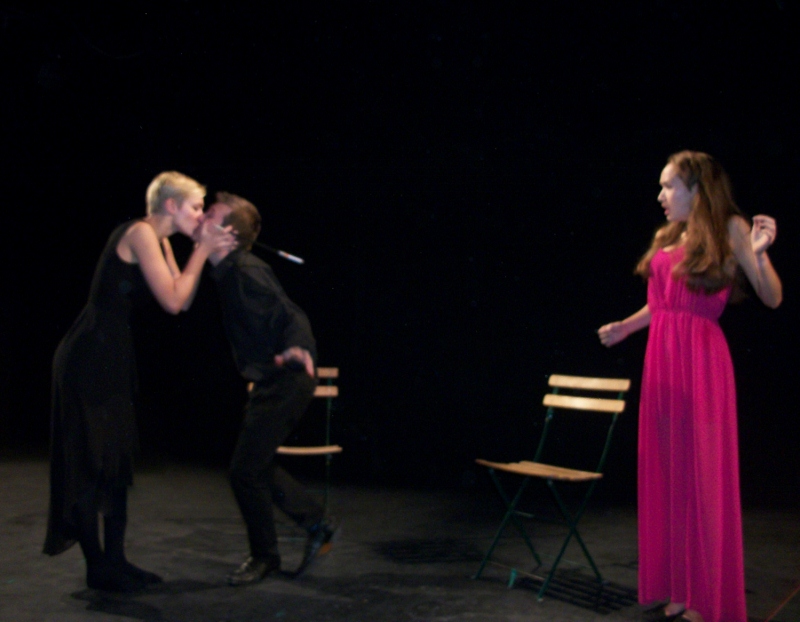 ‘Extraordinary how potent cheap music can be…’

The Drama Society is well known and respected for their smaller, Garage Theatre plays, and if the level of quality fresher talent on show in these plays are anything to go by this success will continue long into the future.