If only Kim shopped in Lidl

I can't claim that I've always been a loyal fan of TV's favourite celebrity family, but thanks to my flatmates' daily ritual of watching Keeping Up With The Kardashians on our shared TV, I have become ever so slightly obsessed. Kim quickly became my favourite – so when her new dietician released her weekly meal plans, I just had to try it. So I decided I would eat like Kim Kardashian for a week.

Kim's trainer revealed that she follows the Atkins diet, a low carb plan designed to make the body burn fat, and her go-to recipes are allegedly quick to cook, with fresh, simple ingredients, so I thought I would try and give them a go – student style. And by that I mean with all my ingredients organically (cheaply) sourced from trusty Lidl. Here's how I got on.

Mondays are one of my busiest days, so I decided to fight the morning blues and cheer myself up with Kim Kardashian's favourite breakfast – blueberry oat pancakes. 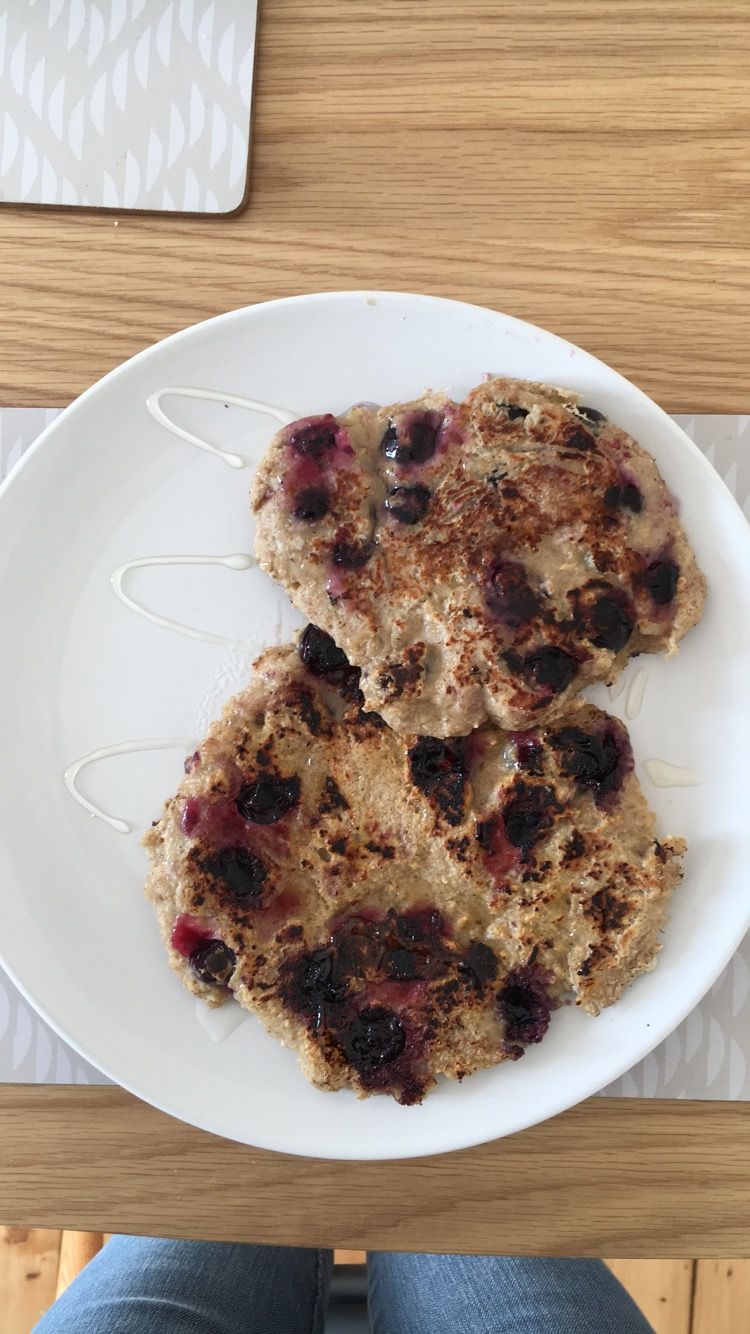 They look a lot tastier than they actually were

Since the diet is low carb, flour was out of the question, as was sugar, apparently – so my mixing bowl looked quite sad. I mixed rolled porridge oats, almond milk, a banana, and some blueberries – and let's just say things turned tragic pretty quickly. I only managed to make two semi-edible sad excuses for a pancake, but I did manage to set off my fire alarm. Twice. The two surviving pancakes were very stodgy, filling and just tasted a little too healthy for my liking.

After all of this, I had already missed my first lecture, was very bloated, and my kitchen was splattered with organic oats – so much for quick stress-free prep.

Haunted from Monday's pancake attempt, I opted for Kim's other (less exciting) breakfast option of scrambled eggs and spinach. I made it to my lecture on time, so was feeling largely more positive and successful about my Kardashian endeavours.

Next was lunch time. I brought a little packed lunch to uni which I had made the night before – a salad of chicken, kale and avocado, with one tablespoon of ranch dressing, because God forbid I'd be allowed any calories. This was actually really easy to whip up and tasted so good, plus I looked very cool pulling out a home made salad from my bag. I worked out after lunch, and I actually felt like I had more energy than normal. 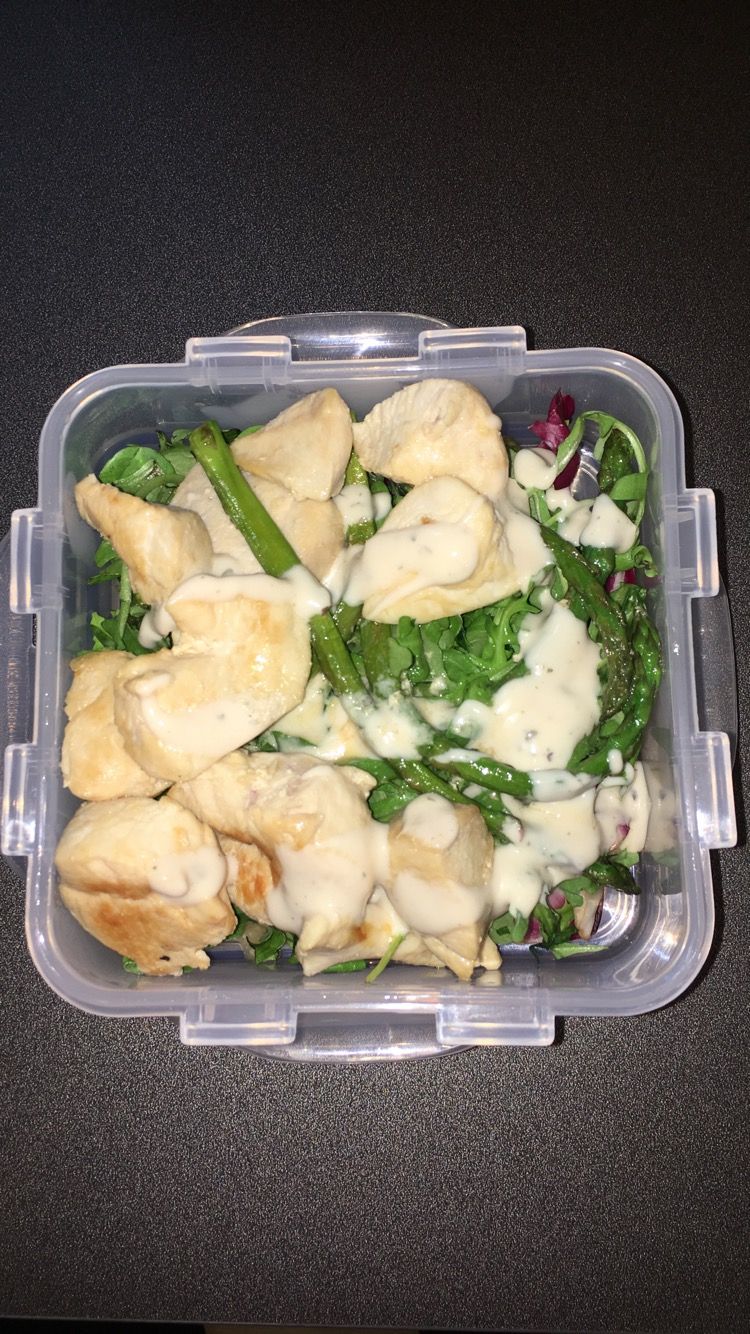 Easy on the dressing Kate! What would Kim say?

Still not enough energy to do 1,000 squats like Kim, but the world's greatest energy bar probably couldn't help me there.

I woke up determined to ace Kimmy's oat pancakes once more – and I did it. After eating these around 8am I genuinely did feel full till about 1pm, so I had no excuse for a classic pick-me-up snack. 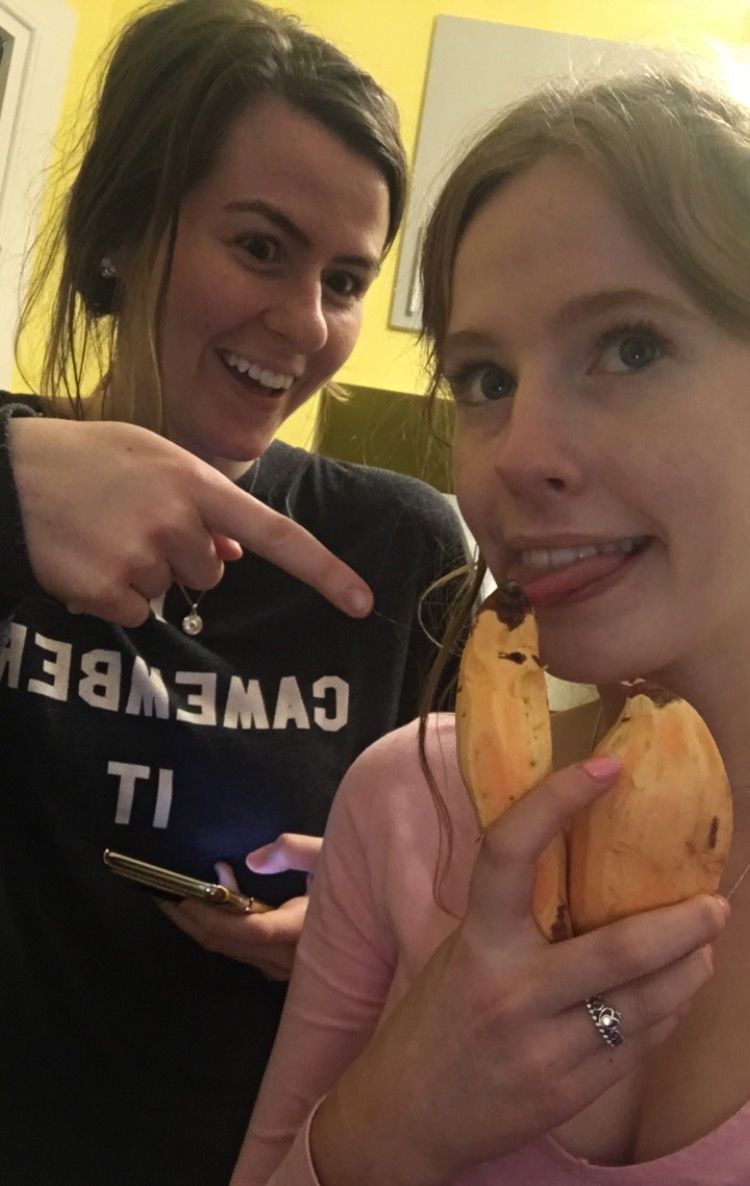 Convinced now that I was basically the next TV chef, I went ambitious for dins and took on Kim's fave post workout dinner – coconut oil roasted sweet potato fries and baked salmon on a bed of leafy greens

I surprised my flatmates and actually produced a stellar dish, and when I went back to the kitchen to get more chips, I met two very guilty faces and an empty tray.

Today was a challenge – and well, I failed. I went out for a nice lunch with a pal, and planned to be strong and just get myself a tap water – but one look at the menu and all self-control went out the window. Pizza Posto you're so naughty! 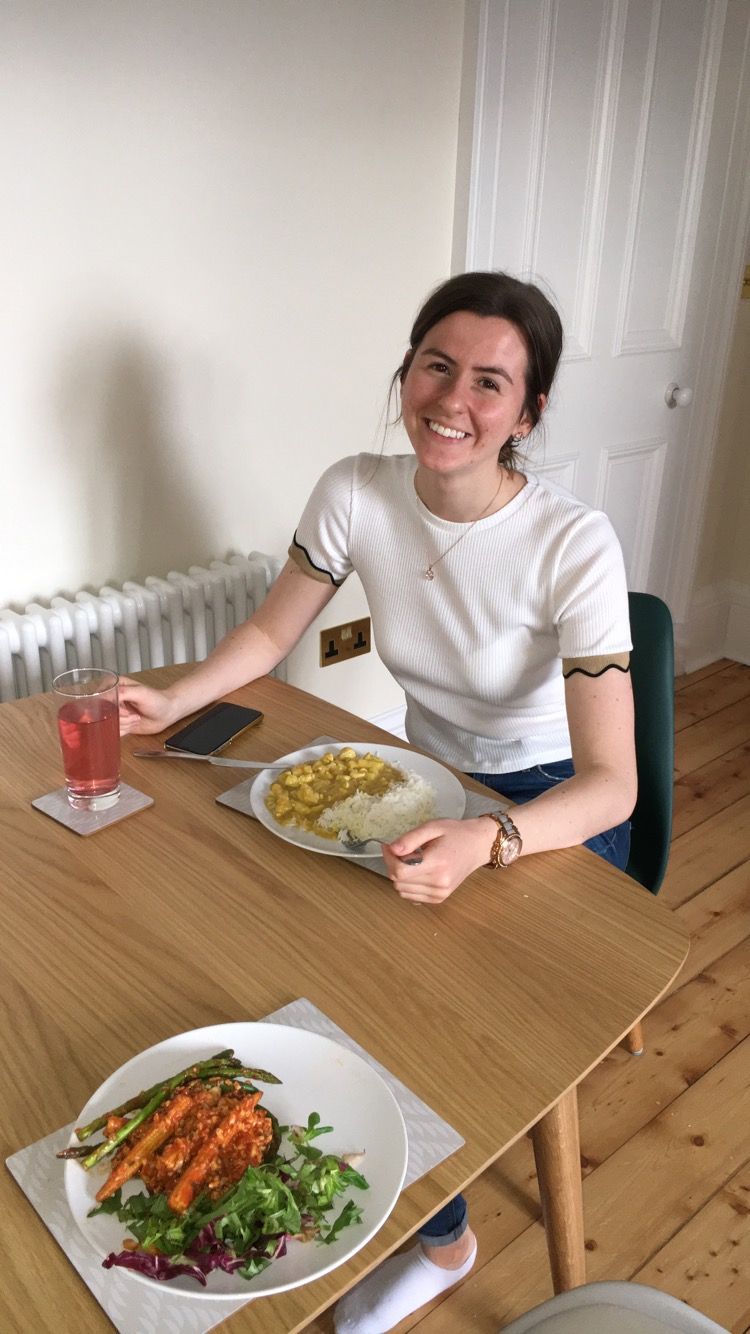 She's such a tease with her curry

Considering I probably ate all Kim's weekly carbs in one sitting, I knew I had to redeem myself. I cooked the meal I was least looking forward to for dinner, as my punishment. And oh boy, was I punished. I made what could only be described as a fishy, grainy mush.

After a breakfast of Greek yoghurt with blueberries and a lunch of dry tuna salad, I was feeling really faint on Friday afternoon as I hadn't really eaten anything that substantial, and Kim's idea of a snack is 10 almonds. 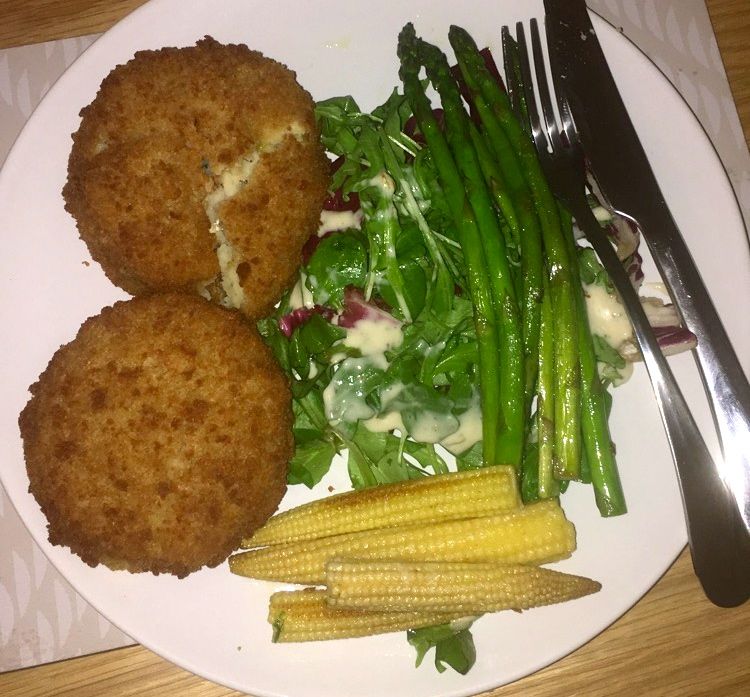 By dinner time, I was famished. I don't know how Kim remains standing throughout the whole day, especially with her thicc ass weighing her down.

My fishcake dinner was okay, but I'm very tired of fish now, and it's 10 times worse when your flat mates are eating naughty Deliveroo next to you.

On saucy Saturdays Kim treats herself to steak – delicious. It would have washed down even better with a glass of wine, but clearly Kim wasn't really feeling a glass of vino tonight.

Afterwards, my flatmates and I ended up watching a film, and it took a lot of willpower to not reach for the Pringles perched provocatively on the sofa. Yes, it has got to the stage now where I'm fantasising about food. What a time to be alive.

I'm sorry, but I just couldn't do it anymore. I woke up grumpy after not getting much sleep, and all I wanted when I woke up was a big fat sugar overload. So I popped out to buy the biggest slice of carrot cake (no denial and zero guilt) and also decided right there and then I was going to sack off the run I had planned because I needed some self love today.

The workout gear was stripped off and the jim-jams were on as fast as you can say Keeping Up With the Kardashians. Ironic really, because I couldn't keep up at all. 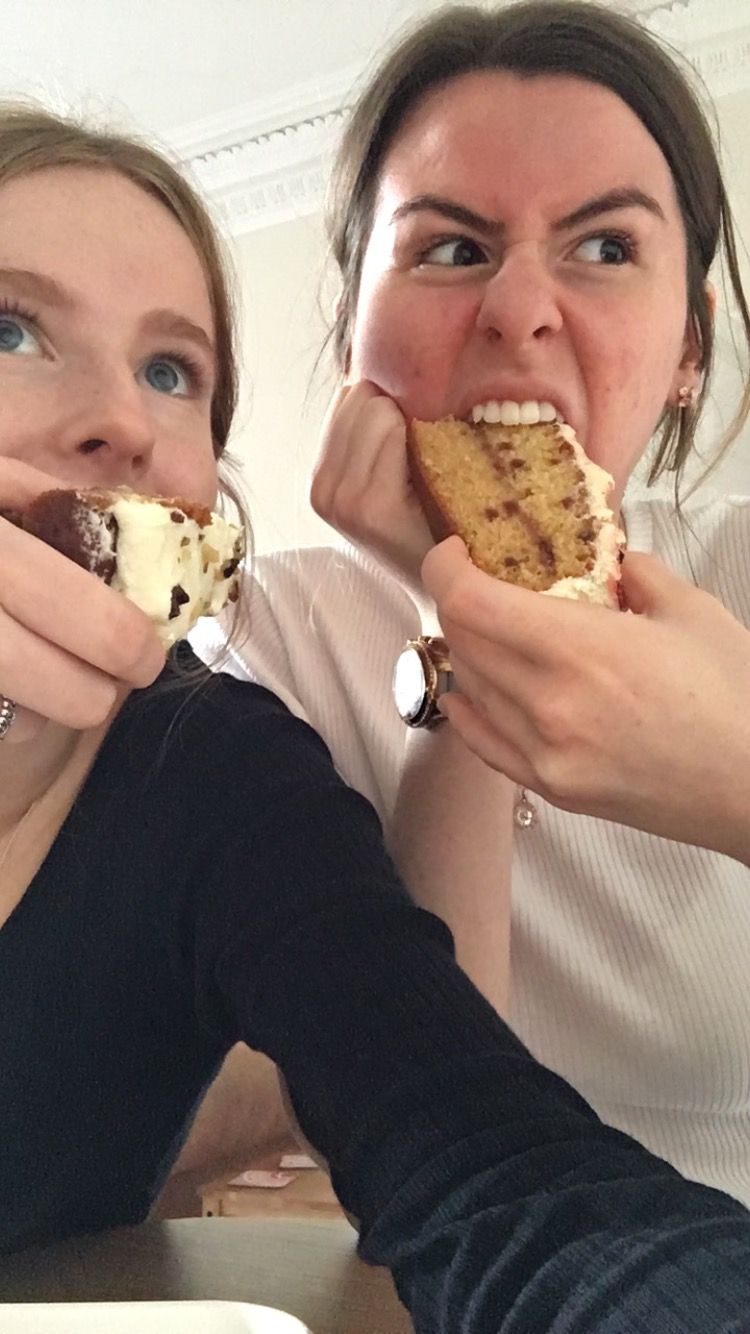 You wanna a piece of me?!

My final verdict? I am now craving carbs 24/7 and my jeans feel a tad looser, but I also haven't grown a humungous butt. Kim's lifestyle is super healthy but not that exciting – plus it made me so conscious of everything that I ate, which just wasn't cool. I felt so guilty after having a pizza with a pal, and that is just so far from the life I wish to lead.

This week's food only cost a grand total of £22, so it was fairly reasonable to eat like a Kardashian – however this still cannot tempt me. So for now, thanks, I'm just gonna continue to binge watch Keeping Up With the Kardashians on my sofa, with a huge bowl of Lidl's yummiest carbs. I couldn't pull off that huge butt anyway.

∙In defence of the naked selfie