Some courses will be completely unaffected, but this is not the case for all

The strikes planned by the University and College Union (UCU) at the University of Edinburgh are set to go ahead in the forthcoming weeks, and as they draw nearer, students are receiving more information on how they specifically will be impacted.

It appears that most courses will remain almost completely unaffected if their lecturers are not part of the UCU. However, for those that are taught by members of the UCU, they could see several classes being cancelled without any alteration to their exam content for that course.

For students enrolled on Social Anthropology 1B, they find themselves being significantly impacted by the looming strikes. Dr Lucy Lowe, the Programme Director for MSc Medical Anthropology, as well as the Deputy Director of the Edinburgh Centre for Medical Anthropology sent an email to her students, making it very clear that "classes will not be rescheduled for a later date", and that "there will be likely delays in the return of grades and feedback".

Along with this, it has been stated that despite the cancellation of some lectures and tutorials, "the exam will go ahead as planned without changes to questions or topics covered".

Read the full email below: 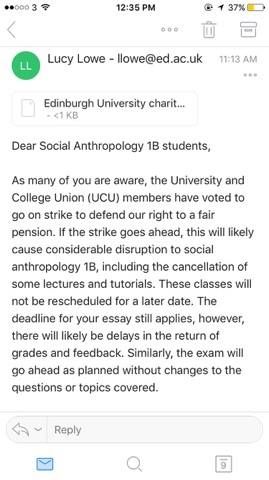 Kibibi Glover-Watts, a first-year student currently enrolled on Social Anthropology 1B, told us how she feels about the strikes, and the impact it will have on her studies if they do go ahead.

She commented: "I definitely agree with the reasons for the strike and stand by them as the situation is really unfair but I think the impact it might have on social anthropology students is quite extensive for there to be no change to assessment.

"Assuming everyone goes on strike I'll miss six lectures and four tutorials which is a lot to catch up on and get to 'exam ready' status."

A statement was made by Bobi Archer, the Vice President of Education in which he said: “The Students’ Association will be supporting those who are involved in the UCU Strike which will take place this semester. A University would not exist without staff and it’s important that we stand in solidarity with them at this crucial time, both for those on strike and the student body.

"We have been working to ensure that the strike will have a minimal effect on students’ academic experience, including negotiating the postponement of deadlines. We feel that the long-term benefits of improving conditions for staff to enable good learning and teaching quality will be worth the action.”