Around 50 students took to the streets

On Wednesday, 'Bristol, Cut The Rent', held a protest at the Victoria Rooms demanding fairer housing for students.

The prolific campaign group marched up to Senate House, around the Triangle, finishing with a rally at Beacon House, where uni management is based.

According to the Facebook event advertising the action, 'Bristol, Cut The Rent' was protesting the rapid growth in student numbers "without having an adequate plan of where they should live." 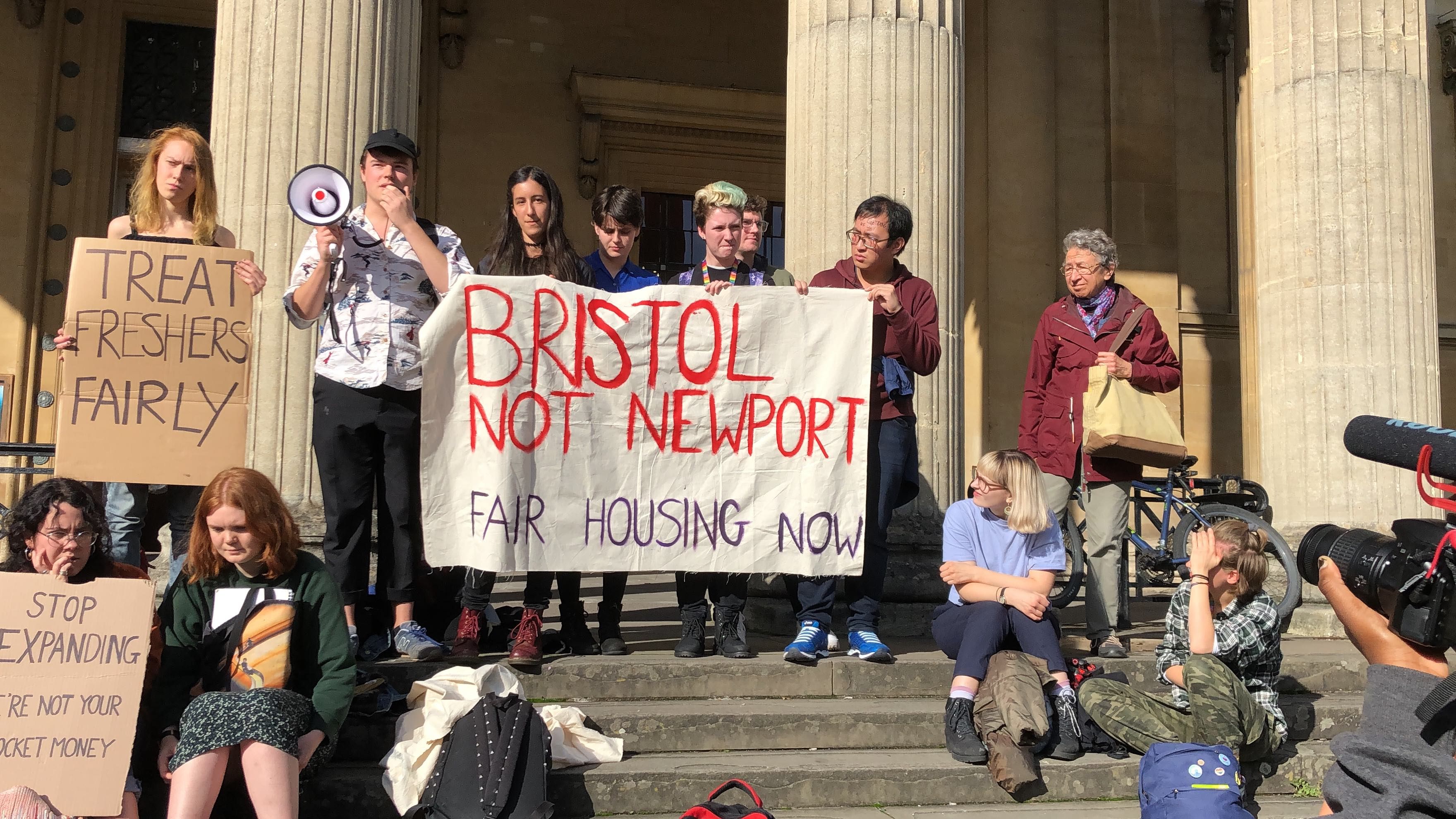 George Bemrose, Student Living Officer, gave a speech at the rally, with a local community onlooker who did not stay long…

The Bristol Tab reported in September that there were not enough beds in Bristol halls, leading the Accommodation Office to offer beds in Newport and to suggest that local students live at home, rather than get the full experience of living in halls.

The Bristol Tab then reported that only 13 students, of the predicted 200, ended up in Wales.

Wednesday's protest kicked off at the Victoria Rooms with a brief speech from Mary Kirri, a 'Bristol, Cut The Rent' activist, explaining about the expansion of the uni as being an important factor in the lack of beds for incoming students. 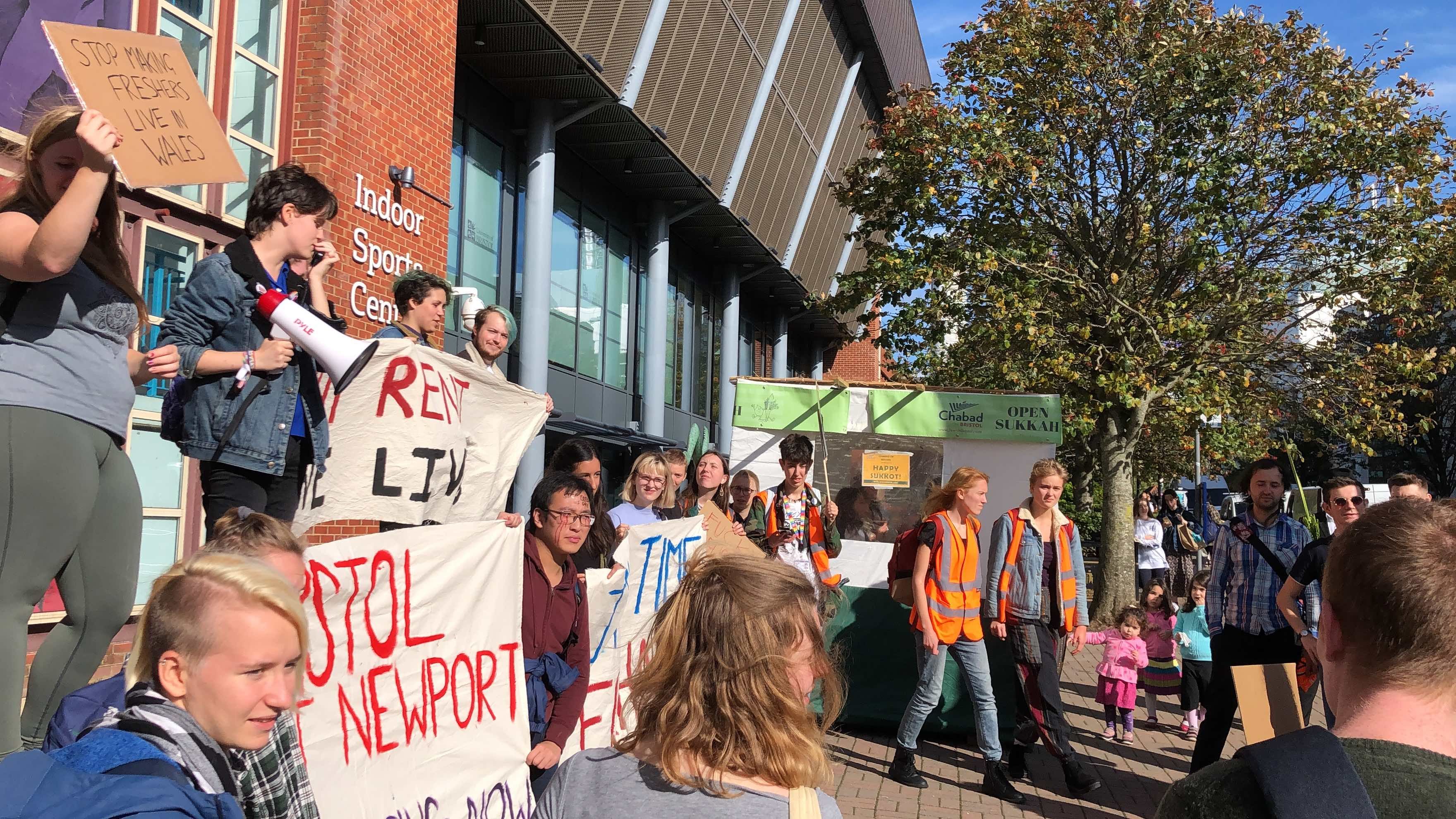 The marchers congregated in front of Senate House, drawing young onlookers from the Open Sukkah, erected for the Jewish festival of Sukkot this week

Ruth Day, 'Bristol, Cut The Rent' activist and Co-Chair of Bristol Labour Students, then took over the microphone, drilling home the point that the university is expanding too fast.

Day said: "We've all been in the ASS library, can't get a seat from 8am. We've all tried to get counselling appointments, can't get one for a very long time.

"No one really noticed and no one really cared until it came to the fact that 200 plus Freshers were eventually homeless and not able to be housed in university accommodation, which we think is disgusting."

The protesters then headed out onto the Triangle and up towards Senate House, where more speeches were held, before heading down Woodland Road and stopping traffic on Park Row and the Triangle as they made their voices heard. 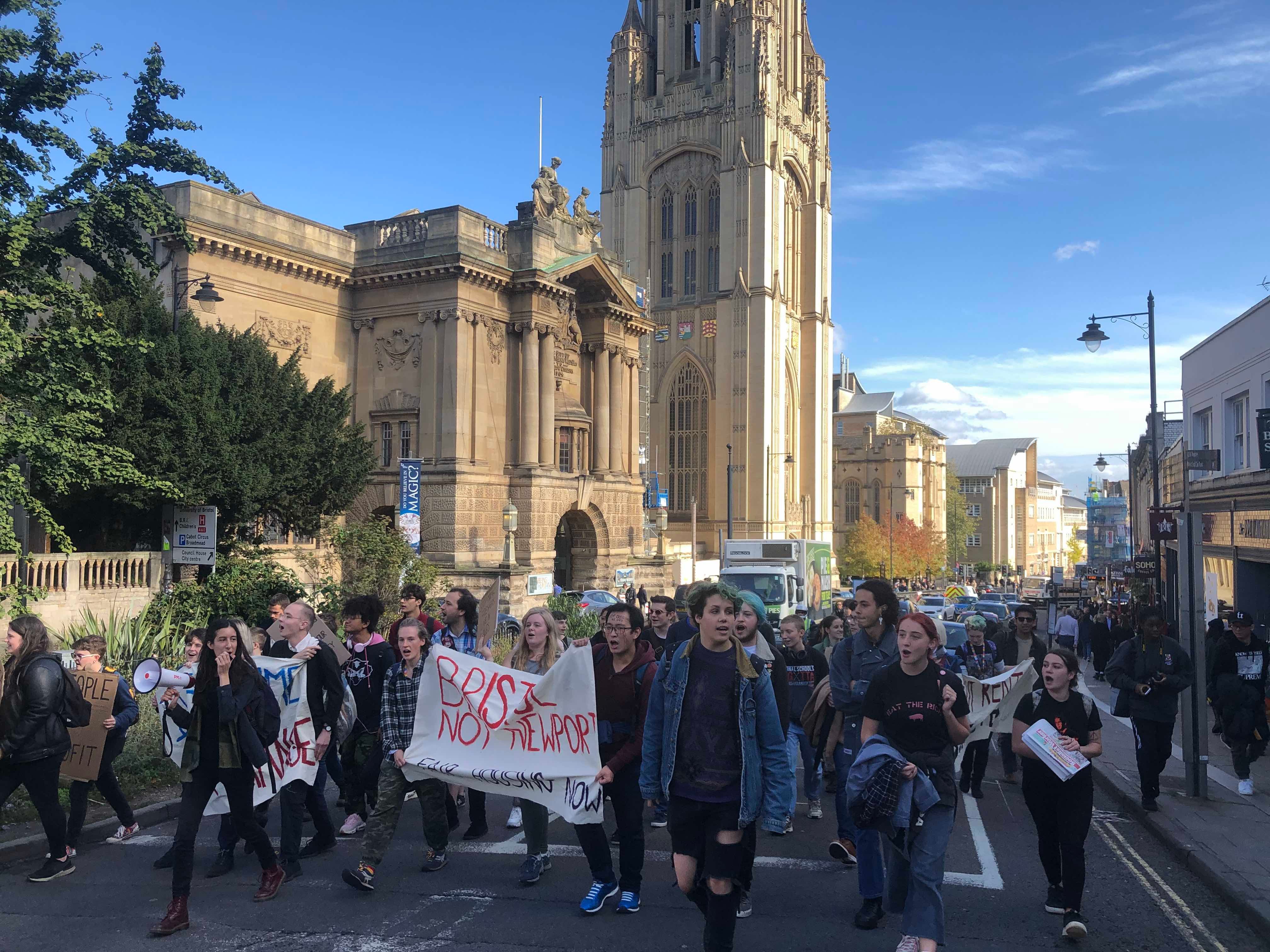 Marchers brought traffic to a standstill on the Clifton Triangle

Shouts throughout the march included "management get out", "anti-capitalista", "there's a housing crisis in this town", and others directly naming Hugh Brady, Vice-Chancellor of the uni, blaming him personally for this crisis.

The protest concluded with a rally in front of Beacon House (the home of uni management) where it was an open forum for anyone who wanted to contribute. 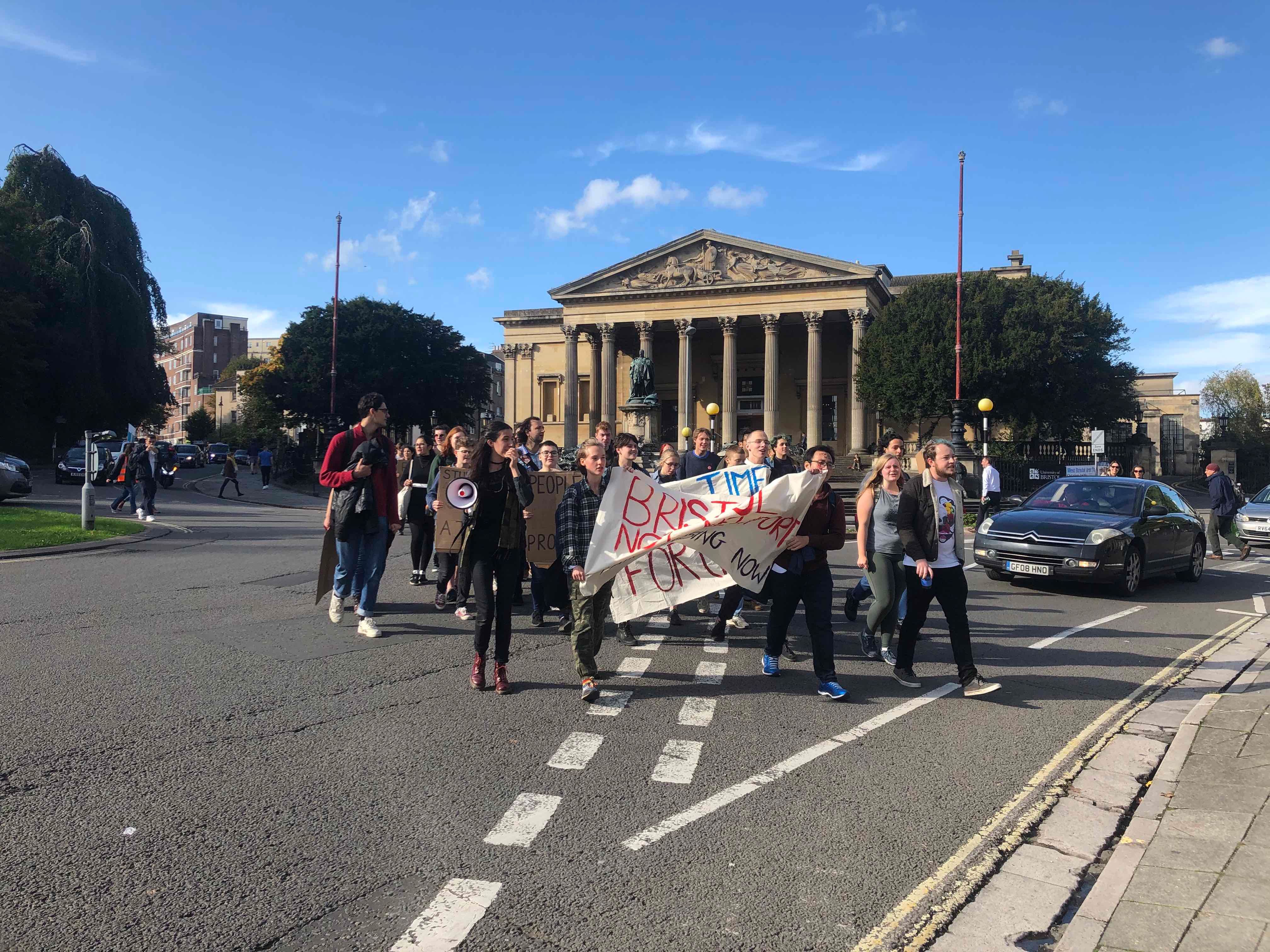 George Bemrose, Student Living Officer at Bristol SU, attended the rally at the Victoria Rooms and delivered a speech, but did not march with the protesters. 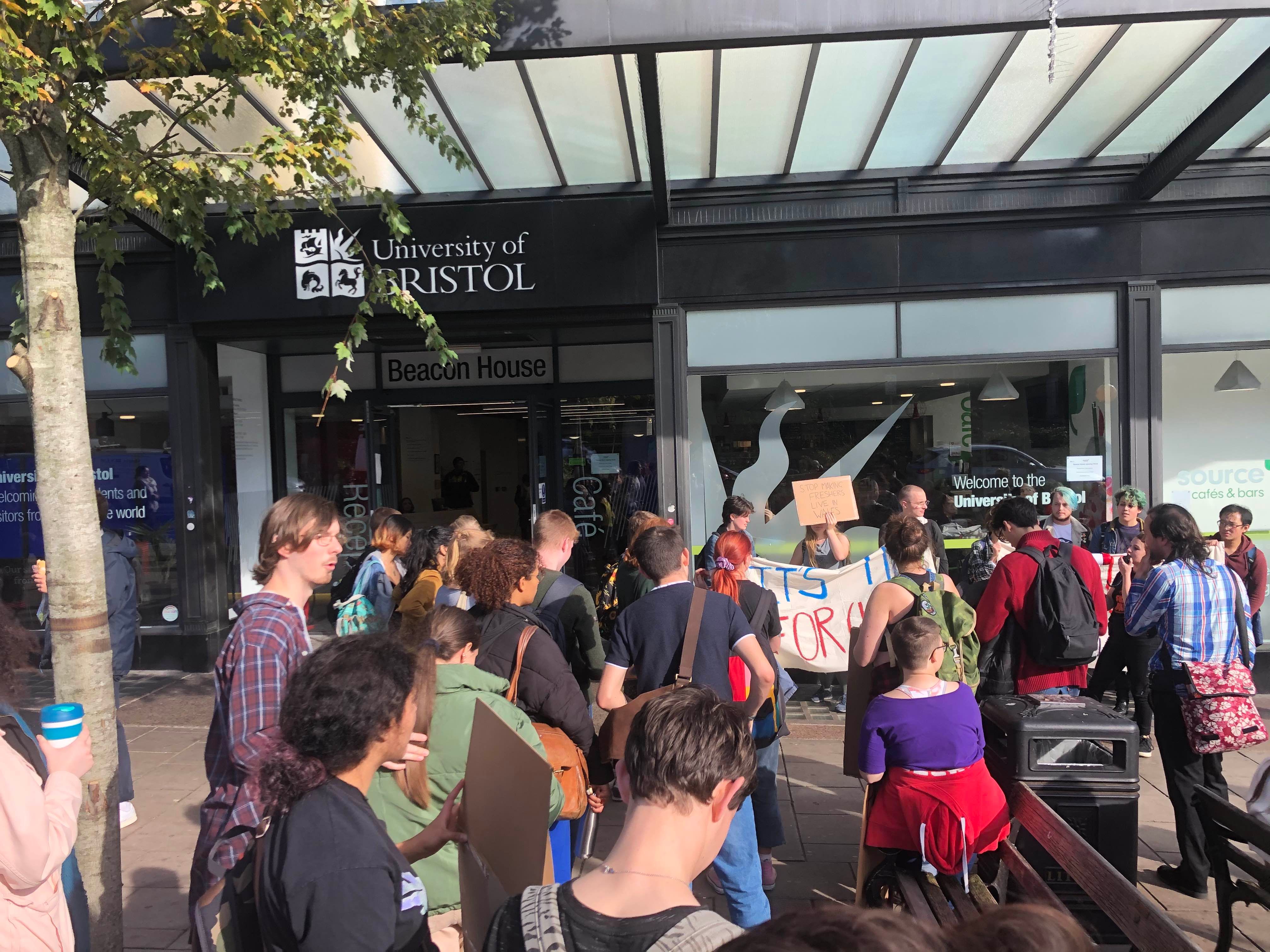 The march culminated in a rally at Beacon House, featuring an open forum for anyone who wanted to speak

"I don’t think it’s acceptable for students to be housed in Newport or in private housing in their first year. Wellbeing is not just about support services, it is also about the environments that contribute to it."

Ruth Day, who has been at the forefront of these actions, had nothing but praise for George Bemrose, stating that "He's been working so hard on this issue. He's a really good officer who really cares about students."