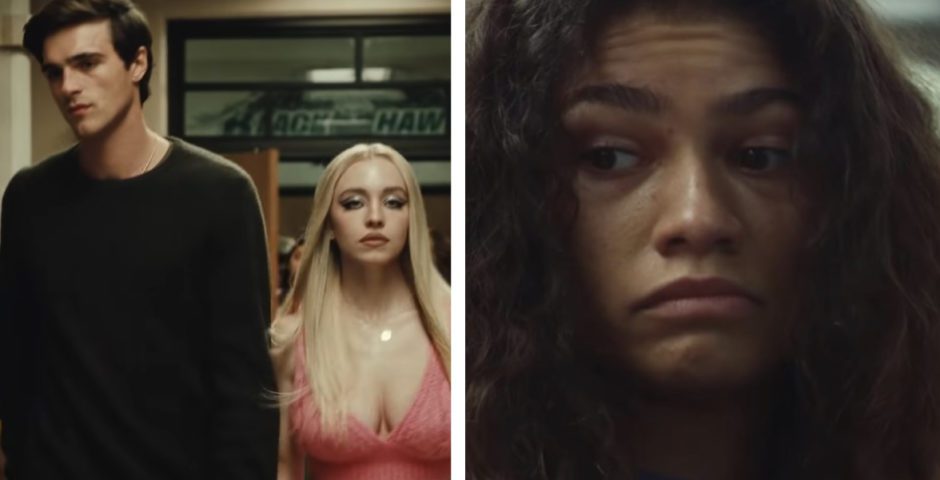 Seriously, when is that puddle getting cleaned up??

The second season of Euphoria has taken us on a seven week rollercoaster of chaotic events. From Jules cheating on Rue to Cassie betraying Maddy, season two has left us with our jaws wide open and stunned after every episode.

With the season having finished and leaving us all weeping, we have rounded up the top 10 most WTF moments of Euphoria season two:

The beginning of season two saw the students of East Highland getting together for a New Years bash and an unlikely pairing of Cassie and Nate. This was a major WTF moment seeing as Cassie and Maddy were the best of friends and Nate was once Maddy’s boyfriend. After weeks of altering her appearance to get Nate to notice her, Cassie’s betrayal is finally revealed and she becomes a whole new person once officially with Nate.

In an enter Euphoria interview, Sydney Sweeney said the creator of the show had asked her what the craziest thing Cassie would do in season two. She said: “I’m trying to think of what is something Sam would come up with, he goes ‘what about Nate? Cassie and Nate?’ I lost my mind, I was like that’s definitely something crazy.”

2. Kat and Ethan’s break up

Kat has my heart in everything she does, she is an absolute girl boss. But when it came to breaking up with Ethan she took the gaslight, gatekeep, girlboss mantra to a whole extreme. Instead of letting Ethan down gently and being truthful, she made an elaborate lie about having a brain disorder and gaslit him into breaking up with her.

I love you Kat, but this just wasn’t it.

3. Cal Jacobs’ urine not being cleaned up

In episode three, we finally get an insight into Cal’s history and it reveals the relationship between him and his best friend, Derek. The most wild part of the episode is when Cal pees on the floor in front of his family and two episodes later it is still not cleaned up.

Why hasn’t anyone cleaned up that piss yet? The Fuck #Euphoria

4. Jules cheating on Rue with Elliot

After reconciling on New Years, Jules and Rue made their relationship official. This was until Elliot became wedged in between them and unknown to Rue, both Jules and Elliot get a lot more acquainted and my jaw was left firmly on the ground.

Although Rue doesn’t know what went down between the two of them, Elliot got his comeuppance in episode five.

DO IT AGAIN RUE pic.twitter.com/OU6i0Zi2cI

5. The entirety of episode five

The fifth episode is the darkest Euphoria has seen and the acting between Zendaya and Nika King is next level. The entire episode was a masterpiece and a pillar in the WTF hall of fame of Euphoria.

Once Rue cannot find her suitcase of drugs and the chilling moment Jules tells her they were flushed down the toilet, Rue says to her former girlfriend, “You’re dead to me,” and we all wiped away a tear.

After this Rue runs away from her family who try to take her to the hospital to rehabilitate herself she gets herself into a police chase. Those Converses really gave all they could and it was groundbreaking.

In a moment all Euphoria fans had been waiting for, the truth was finally revealed to Maddy about Cassie and Nate and the iconic sound of Maddy’s nails clicking together was born.

maddy’s reaction to finding out about cassie and nate !,!?; pic.twitter.com/DxZL7BwlRN

The entire scene between Laurie and Rue was watched from behind my fingers because you just didn’t know what trick the show’s creator had behind his sleeve. Thankfully Rue escaped but there are still so many unanswered questions surrounding her time with Laurie.

6. Maddy being filmed by the family she babysits for

In the second season, Maddy takes on a babysitting role for a lavish family and every now and again she tries on expensive garments which belong to the wife, Samantha. In episode six, Maddy is once again trying on Samantha’s clothes and the camera pans to a clock with a red blinking light which has led fans to believe Samantha had been secretly filming Maddy.

y’all was maddy being recorded or am i trippin pic.twitter.com/c6ejh3wG6m

The moment we have all been patiently waiting for was not Oklahoma, but Lexi’s play. Titled “Our Life”, the play is about Lexi and the other characters, but none of them knew the play was going to be about them and not everyone was too pleased. I’m looking at you, Nate.  The show-stopping performance had to be Ethan’s portrayal of Nate Jacobs, truly the best use of “I need a hero” since Shrek 2.

In the finale, we see Custer working for the police in order for Fezco and Ash to go down for the death of his associate, Mouse. When they find out they are being recorded, Ash stabs Custer despite Fez’s pleads to not do anything.

This scene was so infuriating because Ash chose to ignore Fezco at every moment, and would’ve saved me from so much heartbreak that was about to erupt.

When the SWAT team raid Fezco’s house, they have a standoff with Ash who is shooting at them from the bathroom. Fez’s screams for the police to not shoot at Ash because he is only a kid will haunt me for the rest of my days.

Fez gets shot in his stomach and falls to the ground while screaming for Ash, I cried ridiculous amounts.

Fezco screaming ash’s name is gonna haunt my dreams for the rest of my days 😭😭 #Euphoria pic.twitter.com/k3lVwq2Ypy

This was the worst moment of the season finale, dare I say the entire season. Ash opens the bathroom door and at first, it looks as though he is dead before he sits up and shoots a police officer. A harrowing scene commences when a red dot slowly moves up Ash’s body and we hear a gunshot and a body drop to the ground.

To make it even worse, Fez had to watch every moment.

worse than ash dying, is fezco having witnessed the whole scene and seeing his only family taken away from him

• These are the wildest Euphoria season two finale fan theories

• Euphoria love lives: Who exactly is the cast dating in real life?

• Quiz: Which Euphoria girl are you?