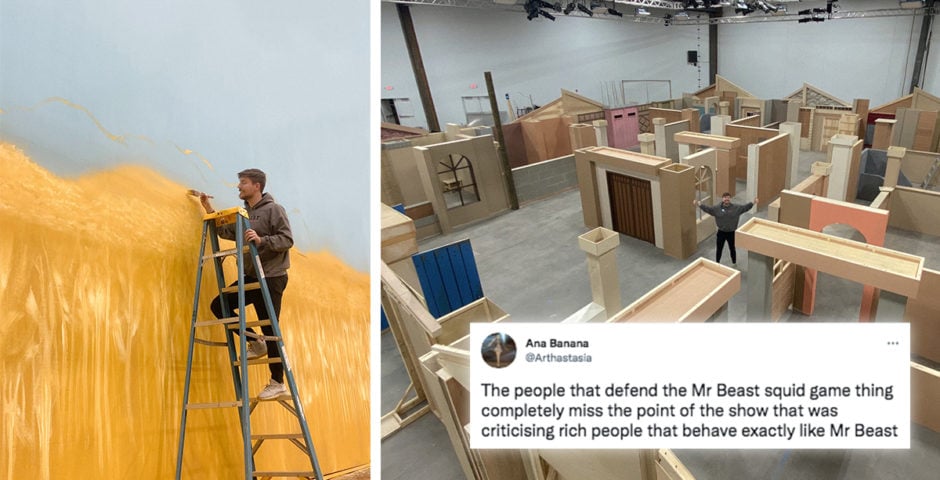 One person said MrBeast’s idea is ‘so wasteful and stupid’

Two weeks ago MrBeast announced he was in the process of creating his very own Squid Game but since then he’s revealed how much it’s costing and the reactions aren’t great. He filmed a TikTok and gave his followers a brief tour of his set and then posted it to Twitter with the caption: “I now have every game from Squid Game built in real life.” But it wasn’t until he revealed he spent around $2 million in building and producing it and then a further $1.5 million in prizes.

On Twitter, several of his followers have said MrBeast has missed the entire point of the show. For those who didn’t watch Squid Game on Netflix, it aimed to show the problems under capitalism and try to understand the moral beliefs of those who are reaaaally wealthy. So obviously spending this much money on a show which tries to show the effects rich people have on poor people, the reactions were never going to go down too well. One person on Twitter said MrBeast’s idea is “so wasteful and stupid” whilst others are saying he should have donated the money instead.

The Squid Game sets are coming together! Wish the 456 contestants good luck next week 😈 pic.twitter.com/LdHf3OSsOE

Another person responded to MrBeast’s original tweet where he revealed how much he had roughly spent. They said: “You know instead of doing this bullshit you could’ve just given $3.5 million to poor people who actually need it instead of spending it to build something you’re just going to use to give your friends, who already have quite a bit of money, more money.”

Y'know instead of doing this bullshit you could've just given $3.5mil to poor people who actually need it instead of spending it to build something that you're just gonna use to give your friends, who already have quite a bit of money, more money.

Despite all of the reactions and attempts to cancel MrBeast for what he spent making his own Squid Game, there are fans responding to the negative tweets shedding light on all of the positive things MrBeast has done to help different communities. Very recently he was involved in a charity fundraiser to clean up rubbish from marine environments. And two years before that he was part of a fundraiser which aimed to plant more trees – this fundraiser ended up bringing in over $23 million. So despite the amount of money spent on his own Squid Game, it’s clear MrBeast likes to donate extreme amounts of money whenever he can.

• This YouTuber has created his very own Squid Game and is offering the winner $456,000

• A deep dive into all of the traumatising, deadly games from Netflix’s Squid Game