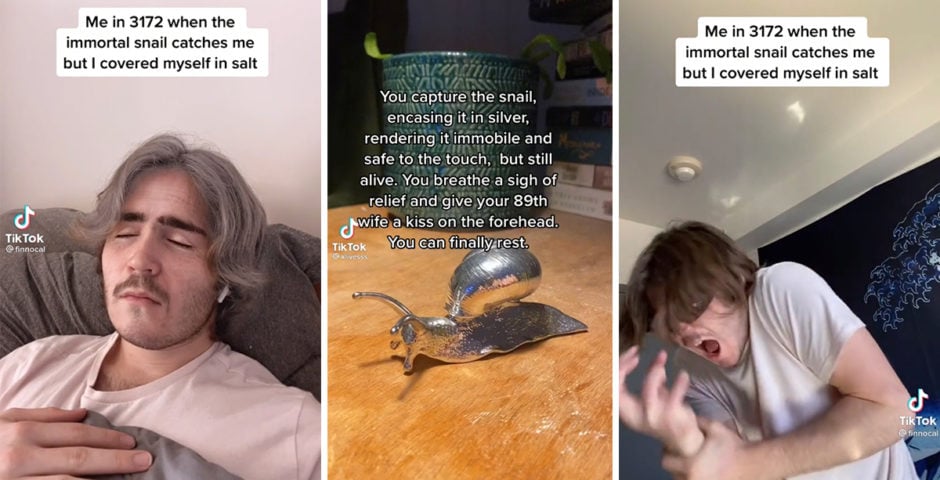 So where did this immortal snail meme on TikTok come from and what does it even mean?

POV: It’s the year 2345 and the immortal snail finally catches you

You’ve probably seen the immortal snail meme going around on TikTok right now. If you haven’t then you’re probably just as confused as the rest of us because the videos don’t really explain much. Where did this meme even come from and is there actually an immortal snail chasing me? We’re about to answer all of your burning questions, let’s start with how the hell this snail meme even started:

Basically the immortal snail memes dates back a few years to 2014 when the Rooster Teeth Podcast gave its listeners a hypothetical scenario. In said scenario, a person receives $10 million and a snail follows them for the rest of their life. But this isn’t just any normal snail because if this snail catches up to them and touches them, they die. So yeah, you have a tonne of money but you’re constantly running from a snail that will kill you.

And now the meme has made its way over to TikTok. It’s currently under the immortal snail hashtag and has over 239 million views. The videos are played to John Lennon’s song, Happy Xmas (War is Over). Pretty creepy, right?

Here’s what people are using the trend for on TikTok

A few TikTok users have been posting videos from the perspective of the snail, which is really weird when you think about it. One of the accounts, @immortal_snail_, posted a video with the text: “I thrive knowing you will never rest.” And the video has been liked over two million times, you can watch it below:

Someone else posted a video captioned with: “POV: You spend immortality perfecting your craft but in the end drop your guard.” And they’re drawing a picture but unfortunately drop dead before finishing because, yes you guessed it, the snail of immortality caught them.

Another user posted a viral video which has over 700,000 likes. In the video they’re digging through a tunnel underground and the text on screen says: “POV: It’s 3041 and you decide to seek out the snail after losing your tenth family.” But when they realise the snail has its own family, the snail says: “I knew you would find me eventually. Let me say my goodbyes to my family first.” And then in a mad twist, you discover the snail hasn’t been chasing them, but they’ve been chasing the snail this entire time. Mind blown.

Let’s hope you didn’t sit for too long reading this, otherwise the snail will catch you.

• Where is the famous Con Flores TikTok song from and what does it mean in English?

• This YouTuber has created his very own Squid Game and is offering the winner $456,000