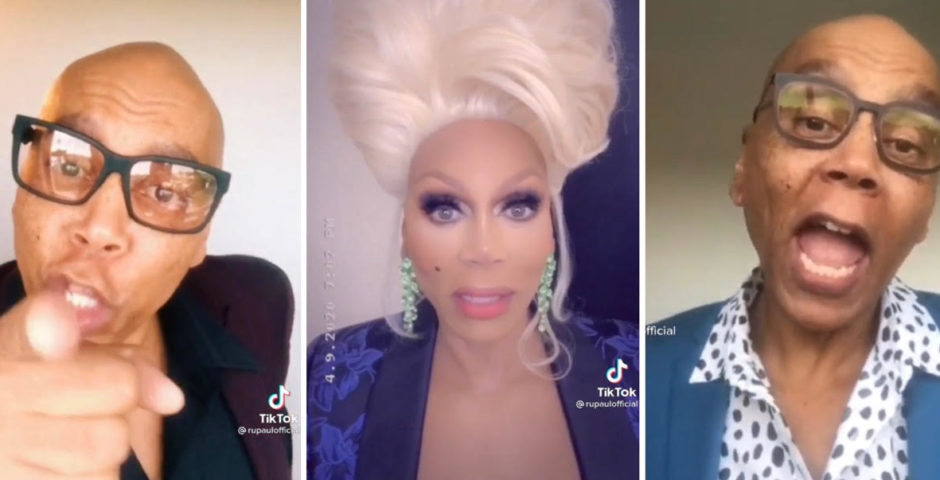 ‘Not the senior citizen gaslighting via bad dance music’

If you aren’t aware, allow me to make you wish you weren’t: 60-year-old RuPaul has released a new diss track called Blame It On The Edit. In case the does exactly what it says on the tin song title doesn’t give away to you exactly what this bizarre track is all about, it involves RuPaul clapping back and throwing shade at the many queens who have left RuPaul’s Drag Race and claimed that the production team have edited them to come across a certain way. Lyrics include “Go on and take the credit, bitch, you the one who said it, bitch, how you gon’ regret it? Blame it on the edit!” and the equally damning “You already know who I am, you know what the fuck I do – so why they all in my house, they lyin on my production crew”. To promote the single, RuPaul has made some accompanying videos on TikTok… and people have A LOT to say about it.

In the videos, RuPaul bounces about like she’s made of stale jelly, mouthing along to the new single from her forthcoming album Mama Ru before abruptly transitioning to an ominous shot of her in drag. It’s bizarre, and completely disregarding of all the queens who’ve come forward and said whilst they of course did say what they said, production would ask certain questions than cut it about to make whatever narrative they like. Drag Race producers can add shots of RuPaul looking unimpressed in whenever they want with that infamous shady rattlesnake noise and instantly set a tone. But who cares? SHE WANNA BLAME IT ON THE EDIT!

‘RuPaul in his Reputation era’

Nothing sums up the strange audio avenue RuPaul is sashaying down better than the above TikTok caption, of course referencing Taylor Swift’s iconic “the old Taylor is dead”, snake era of her 2017 album Reputation. Everyone’s reaction is along the same lines: RuPaul is cursed for making a song like this, but at the same time… we’re all kind of bopping. One says: “How could RuPaul even write this? It’s so disrespectful to the very mental health impact of participating in reality television” before transitioning to them dancing and grooving to the problematic banger. Comparisons have been made to Ariana Grande. “This is literally a rejected Positions or Dangerous Woman track. Like Ariana had a hand in this” said one, with another comparing it to Pharrell’s work on her Sweetener album and saying “RuPaul has entered her Sweetener era.”

@possiblykimrichards♬ Blame It on the Edit – RuPaul

@teenyweenybebe♬ Blame It on the Edit – RuPaul

The general consensus is the same: We hate the message, but love the song. One TikTok creator said “The fact this song was made by a 70-year-old man”, and whilst they aged RuPaul by a decade, the point still stands. Blame It On The Edit is petty AF.

What else is lurking on RuPaul’s TikTok?

Thankfully, not much. But what is there is a cursed odyssey of chaos. There’s this random video of Ru talking about meeting an icon?

There’s a strange one where Ru randomly wishes everyone what I ASSUME is a happy holidays? But she garbles it and posted it anyway:

A dinner party anecdote requested by no one:

And my personal favourite, RuPaul randomly singing Tell It To My Heart: