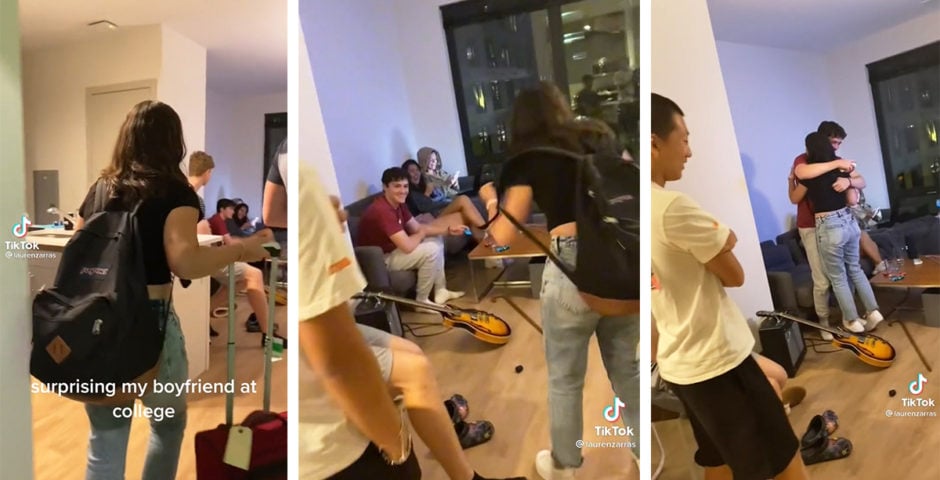 Who is couch guy on TikTok and why is everyone saying he’s been caught cheating in 4k?

But before we get into it, we have questions!!! Who even is couch guy? Was he actually excited to see his girlfriend? And why the hell was he sitting there with three other girls?? If these questions are keeping you awake at night then don’t worry, I’m about to answer all of them for you:

The viral couch guy TikTok has 51.4 million views and 4.3 million likes. It shows a girl named Lauren entering her boyfriend’s living room at college. Her boyfriend, Robbie, doesn’t exactly react the way we’d all expect. Watch the video below:

People are ripping the original video to complete and utter shreds. TikTok users have dissected every single thing that was off about his reaction to his girlfriend walking in. Including pointing out every single red flag they can see.

Lauren (couch guy’s girlfriend) posted the video onto her account and she is fighting for her LIFE in the comment section right now. The whole video feels a bit awkward, like the fact he doesn’t immediately stand up when he sees her walking in. Or the way he is sitting on a sofa with THREE OTHER GIRLS!!! It all looks very suspicious. One of the girls he’s sat with also passes him his phone back before he stands up to hug his girlfriend.

People are pulling the video apart frame by frame and sharing their thoughts in the comments. Poor Lauren just wanted to share a wholesome moment and now she has a complete stranger telling her that her boyfriend is cheating – it’s mental. Anyway, Lauren is replying to the comments, she said: “His phone was in his lap. Thanks for the concerns though! And no, I’m not in denial.” But people (complete strangers to Lauren and couch guy) kept commenting their doubts about the security of their relationship. Lauren replied to those comments saying: “Breaks my heart that people can watch a special moment and bring so much negativity. Please think before you say anything about my relationship.”

One TikTok user commented: “Okay sis, I was really on your side until the twentieth time watching this. That girl’s hand really did slide your man his phone.” Another person said “Yeah Robbie has no idea that he was being caught in 4k.”

The boyfriend and famous couch guy has also posted a TikTok onto his personal account. Whilst he’s filming the viral sofa where the video was filmed, he says: “Couch guy here. You’re welcome for getting you off berries and cream TikTok. But remember, not everything is a true crime. Don’t be a parasocial creep. Go get some fresh air. Take care.”

According to Lauren’s other videos, her and couch guy are going strong and have been doing long distance for over a year now. Congrats to the happy couple, hope he manages to lose his nickname soon.

• Wait, what is a devious lick? And why am I seeing it all over my TikTok rn?