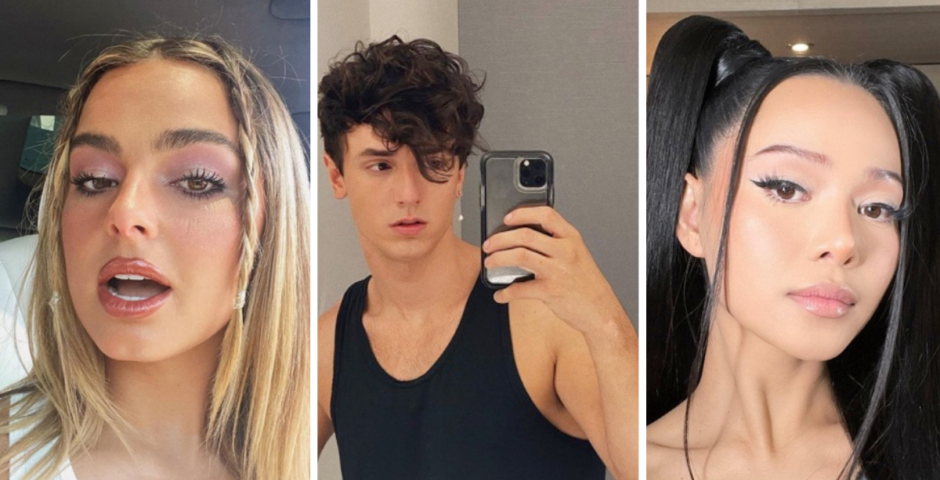 Cheating rumours and celeb exes: Inside the love lives of all your favourite TikTok stars

Whether they’re single or loved-up, they’re more successful than you’ll ever be

TikTok has really been the saving grace of this pandemic for a lot of us, giving us banging recipes to try out, fun dance moves to learn, and a WHOLE load of banging songs. But how much do you really know about all your favourite TikTok creators and their love lives?

Here’s a look inside the love lives of all the biggest TikTok creators, so you know who’s single and waiting for you to slide into their DMs (lol as if hun x). From on-and-off relationships, to rumoured cheating scandals and celebrity exes, TikTokers really seem to have had it all.

Here’s everything you need to know about the love lives of the biggest TikTok stars:

Addison Rae’s most high profile relationship was with member of the Sway House Bryce Hall.

They had an on-and-off relationship for quite a while, first linked in late 2019 and reportedly breaking up in May 2020. They then publicly rekindled in November 2020, but said they had been together behind closed doors for two months.

It was rumoured that Bryce cheated on Addison while in Vegas, however, these rumours were swiftly shot down with a simple tweet.

I didn’t cheat on addison.

Addison was then rumoured to be dating musician Jack Harlow in April 2021, however nothing was ever confirmed. April was clearly a busy month for Addison, as at the same time, there was also claims she was dating YouTuber David Dobrik, and she even went as far to call him “sexy” in a duet with him on TikTok. Nonetheless, we still never got clarity on the situation.

There was also speculation by the Kardashians themselves over whether the pair were “hooking up”, although those rumours were denied by Addison Rae in her appearance on Keeping up with the Kardashians.

For now, it looks as though Addison Rae is single and just here to live life.

In December 2019 rumours between fans began to circulate that Charli was dating fellow TikToker Chase Hudson, or Lil Huddy as he is better known.

It was confirmed by February 2020 the teenagers were together, via their Instagram posts that have since been deleted. But by April 2020 they’d confirmed their split in an Instagram story.

Josh Richards and Bryce Hall then dropped a diss track titled Still Softish, claiming that Chase was cheating on Charli. The video literally opens with an accusation that Chase has been trying to hook up with Josh’s girlfriend, Nessa Barrett. Chase denied these allegations however, and the pair seem to have remained good friends, and after all that drama, Charli remains single.

Dixie was first linked with fellow viral TikTok creator Griffin Johnson from February 2020, but in summer 2020 it all started going downhill when Lil Huddy, her younger sister’s former flame, reportedly accused Griffin of cheating on Dixie.

Griffin denied the allegations he had been unfaithful, but then Dixie herself posted apparent “proof” of his infidelity. She shared a screenshot, allegedly of a message from Griffin, which says he “owns up to it completely”, explaining: “I have hurt you in a way that can never be forgiven or forgotten”.

Dixie captioned the TikTok “real convenient…”, and confirmed their break up in a YouTube video in August 2020, where she documented their last ever date in the most savage way possible.

Since the cheating drama with Griffin, she has been in a relationship with another TikToker, Noah Beck since October 2020. Earlier this year, he took her on a romantic getaway for Valentines Day, and they celebrated their eight month anniversary in May 2021 at Disneyland.

Before his rocky relationship with Addison Rae, Bryce was also linked to member of the Team 10 House, Elle Danjean. The fling with the Instagram Influencer and TikToker was short-lived, and they reportedly broke up in July 2019, not long before he was linked with Addison.

Bryce and Elle had a tricky relationship and a video surfaced on the internet of Elle allegedly hitting Bryce. However, Bryce reportedly said Elle was drunk and behaved out of character, saying he filmed the video in order to show her what her actions caused from the situation.

The rumour mill began to churn out even more information about Bryce when claims surfaced saying Bryce had actually been in a relationship with Mikey Barone back in 2015. However it was never confirmed, and there was no concrete evidence to prove so.

Since his split from Addison, he’s been linked to 24-year-old model Josie Canseco who has also dated Logan Paul in the past. But, it seems the right girl is yet to change his ways, and for now he is still single.

Tony Lopez’s love life has always been away from the public eye. He was previously linked to famous YouTuber Nikita Dragun and Sofie Dossi, a contortionist who appeared on America’s Got Talent in 2016, however both Tony denied both of these connections.

Tony now has decided to make his current relationship, with dancer and influencer Sarah-Jade Bleu, public. He posted a loved-up picture of them on his Instagram.

After becoming famous for her child-like and slightly creepy TikTok’s, Bella Poarch has very rarely spoken about her love life publicly.

There were rumours of her dating Kylie Jenners ex, the famous rapper Tyga, after the pair posted a TikTok together. However the two denied these claims, and Bella Poarch is in fact single.

Loren Gray is a TikTok veteran, and has been around since the days when it was msuical.ly. In all her time making videos, she’s reportedly dated several YouTubers, including Joey Kisluk from 2015 to 2016 when she was just 14 and he was 16.

After that, she was also rumoured to be dating British singer and Strictly Come Dancing contestant HRVY in 2017 as she appeared alongside him in the music videos for Personal and Million Ways, but it was never confirmed if they were actually together.

She has also reportedly been in a relationship with Ian Jeffrey, James Charles’ younger brother. They met through YouTuber James, and began dating in 2018, but they didn’t last very long, and soon they deleted all traces of each other off of social media. Loren has since confirmed that they ended on good terms and are still friends.

She is currently with Kyle DeLoera, who’s sisters Devyn and Nhala formed the pop duo DELORA. They have been together since 2020 and seem to be happy from what we can see on Instagram.

• Youngest Islanders of all time: These are all the Love Island contestants under 20