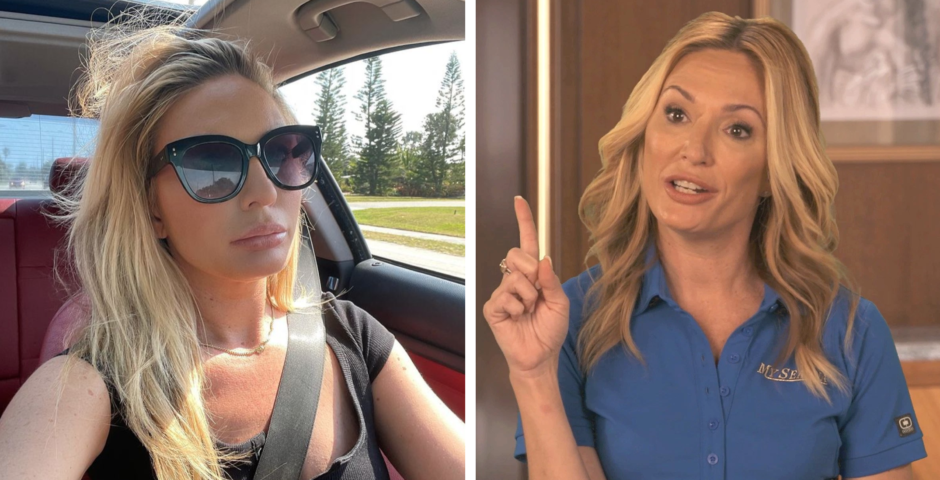 Below Deck: Who is straight-talking chief stew Kate Chastain and where is she now?

She is still friends with Chef Ben!

Of the many faces that have come and gone over the course of Below Deck history, perhaps the most regular and popular(ish) of the bunch has to be chief steward Kate Chastain. Known for her stern glare (which several guests have commented upon) and fierce dedication to the job, it’s no wonder she’s been invited back time and time again to run a tight ship on the countless luxury yachts that we’ve been treated to a peek inside.

So, as the straight-talking badass crewmate of Below Deck, who is Kate Chastain, and what has she been up to since appearing on the show?

Kate Chastain appeared on Below Deck for six years

First featuring on Below Deck in 2014, Kate has been in every series of the hit show since. During this six-year stint, she has seen it all, from huge arguments with colleagues to romance with people both on land at sea. Speaking of which…

She was arrested in 2016 following an altercation with her girlfriend

In 2016 Ro Hernandez, Kate’s ex-girlfriend who actually appeared on Below Deck several times, told police that she had received physical abuse from Chastain.

Chastain reportedly denied these claims at the time and told officers that she was instead the victim. Two years later she told People how she is now cautious with who she dates. “Fortunately that’s all gone away,” she said, “but I’m a little more cautious about who I date because people can appear one way and then be totally different.”

After litigation, the charges were dropped.

After six years on the show, Kate hung up her crew jersey to pursue a new career in television. Taking on Instagram, Kate said she was stepping back from the show. “After many months of reflection and internal discussions, I have chosen to make a transition this year in starting to carve out a progressive new land-based role.

“I intend to step back as a senior member of the Below Deck Family and work to become financially independent while continuing to fully support His Majesty Andy Cohen.”

She later explained further by saying that she felt too old for the profession: “I just feel like I’m 37 and a half. I don’t think a girl should be wearing a skort at 38.”

She is still friends with various people from the show

From the comments section to her various photos with other Below Deck cast members, it’s clear to see from Kate’s Instagram that she’s still friends with some of her colleagues.

Talking on The Daily Dish podcast, she explained how Chef Ben unexpectedly turned up on her doorstep recently. “He gave me one day notice,” she explained. “He’s like, ‘Hey, babe, coincidentally someone in your town hired me for a private chef gig, so I guess I’m going to come visit you. I’m bringing my girlfriend, and do you mind if we bring her dog?”

It turns out Kate got along famously with his girlfriend Kiara, and they had a great time together: “They were lovely, and it was so much fun, and it was so good to see them,” said Kate. “I actually love his girlfriend. Probably more than him. She’s gorgeous, she’s hilarious, she’s patient with him, which is a good match for him.”

Kate went from hating TikTok to loving it during lockdown

There are 2 types of people:

Like many people who used to turn their noses up at TikTok, Kate has pulled a completely 360 during lockdown and has gone back on the above statement by posting seven videos to date:

She seems to divide her time between posting across her socials and hosting Galley Talk, a programme in which previous crew members discuss current episodes of the show.

• Where are the crew of Below Deck Season 1 now?

• Below Deck: Who is Chef Ben and where is he now?