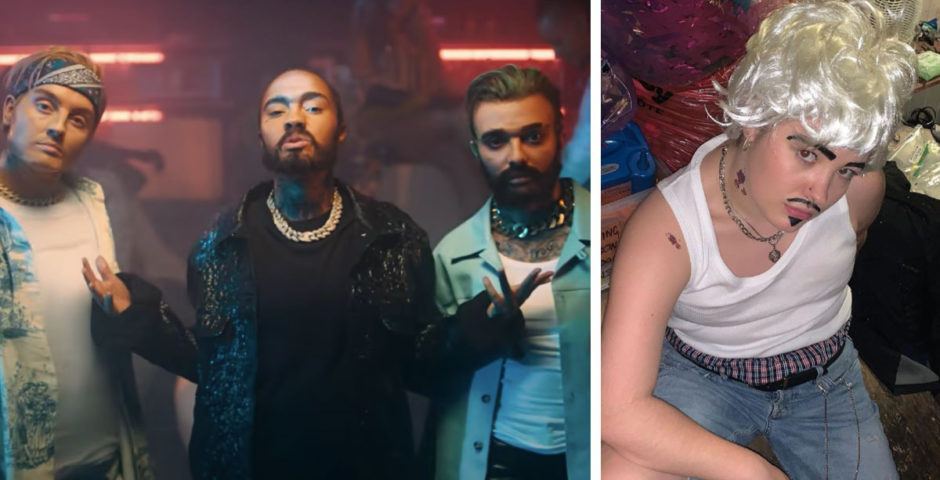 It was a smart move for Little Mix to feature Drag Race UK’s Awhora, Tayce and Bimini Bon Boulash in the newly released video for their new single Confetti – they are the breakout stars of the show.

But, in the video Perrie, Leigh-Anne and Jade drag up as boys and some drag kings think Little Mix could’ve shared the space with the artists they personally emulated in Confetti.

The Tab spoke to two drag kings working in the UK about their say on the video.

Beth Sitek is the the drag artist behind C.E.O. Peter Stokes. Beth performs at clubs and bars around London.

In an Instagram post, Beth shared her feelings of Little Mix’s new video: “A bit of me read their performance as something for women and those who experience misogyny to identify with, the other bit of me was like ‘they are trying to make this funny’ and therefore their entire performance could be read as some sort of joke which is dangerous and harmful.”

When The Tab spoke to Beth, she said it took her a while to get angry with the video. “The more I watched, the more I realised this doesn’t feel political, it feels funny”, she told The Tab.

“As a drag king, I try and make work that is political – subverting masculinity. When Little Mix appeared as kings, they made misogynistic comments to show what it’s like for those that experience misogyny, but the comedic veneer undermined any points that they tried to make.”

Sitek praised Bimini Bon Boulash’s appearance, and raised that Bimini used their platform to share drag kings to their story. But what about the drag artists who are not eligible to appear on RuPaul’s Drag Race? Couldn’t Little Mix have done something to diversify drag representation in the Confetti video?

There is recent small steps of change; Bimini, who identifies as non binary, isn’t the stereotypical brand of queen that’s likely to be cast and, in the US, Gottmik became the first trans man to compete. Both Bimini and Gottmik performed exceptionally on their seasons and have established themselves as fan favourites. But largely, the drag scene remains dominated by cis men. The impact and influence of Drag Race casting on mainstream perceptions of the drag scene is huge.

“It speaks volumes of the larger hierarchy of drag,” he told The Tab, “Well done to the Drag Race UK queens for getting promoted with Little Mix. That’s great. Drag is a subversive art form that’s so playful and holds such political power. Why wouldn’t you want to put drag in a music video?

“I just think it’s a colossal shame when you had that opportunity to platform drag kings. ‘ It’s harder to book gigs as a drag king, even though we’re doing exactly the same things as drag queens. Arguably even more politically, as we are satirising the oppressor.

“I don’t think Little Mix were being malicious, but I do think it was a shame.”

The Tab has reached out to Little Mix for a comment.

• Little Mix net worths: Ok, so just how rich are they all really?