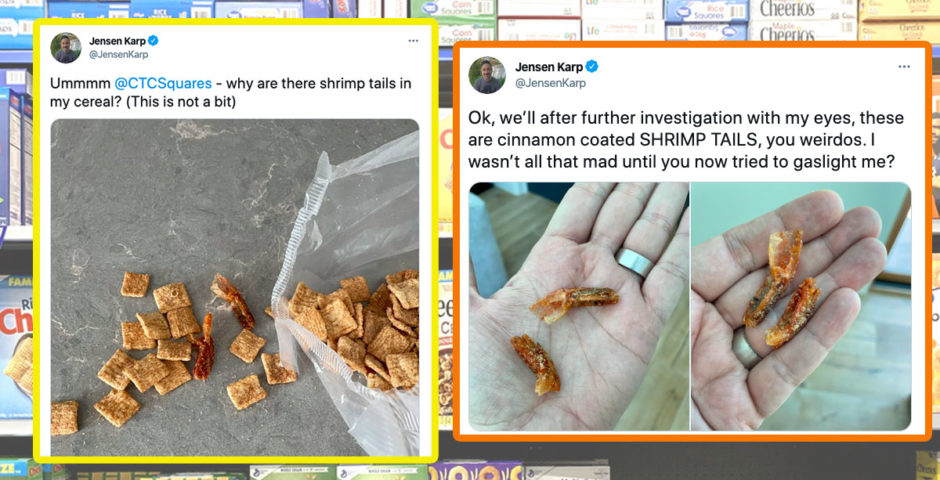 What the hell is going on with Cinnamon Toast Crunch shrimp on Twitter?

The timeline you need to understand the chaotic saga

If you’ve been on Twitter in the last few you days then you will probably be familiar with seeing a lot of talk about Cinnamon Toast Crunch shrimp all over your timeline.

It’s not a new kind of cereal that’s been invented, the reason it’s all over Twitter is because a man claims he found shrimp tails in his Cinnamon Toast Crunch cereal and it’s quickly gone viral.

The cereal company has denied it, there’s been memes and now a crustacean specialist is getting involved in deciphering what is actually in the cereal pieces. It’s honestly been a bizarre 48 hours.

Ummmm @CTCSquares – why are there shrimp tails in my cereal? (This is not a bit) pic.twitter.com/tTjiAdrnVp

This the much needed timeline to understand the Cinnamon Toast Crunch shrimp saga:

On Monday 22nd March the writer Jensen Karp tweeted Cinnamon Toast Crunch claiming there were shrimp tails in his cereal.

He tweeted a photo of the cereal and said: “Ummmm @CTCSquares – why are there shrimp tails in my cereal? (This is not a bit)”

The social media team for the cereal quickly replied saying they were sorry for what Jensen found and wanted to send him a replacement box.

They wrote: “We’re sorry to see what you found! We would like to report this to our quality team and replace the box. Can you please send us a DM to collect more details? Thanks!”

Later that day Cinnamon Toast Crunch tweeted to say they had looked at the image further and they believe it to be an accumulation of cinnamon sugar.

After further investigation with our team that closely examined the image, it appears to be an accumulation of the cinnamon sugar that sometimes can occur when ingredients aren't thoroughly blended. We assure you that there's no possibility of cross contamination with shrimp.

They wrote: “After further investigation with our team that closely examined the image, it appears to be an accumulation of the cinnamon sugar that sometimes can occur when ingredients aren’t thoroughly blended. We assure you that there’s no possibility of cross contamination with shrimp.”

Jensen was clearly not satisfied with the response from the team and he later tweeted out two more close up images of the alleged shrimp tails and claimed the company was gaslighting him.

Ok, we’ll after further investigation with my eyes, these are cinnamon coated SHRIMP TAILS, you weirdos. I wasn’t all that mad until you now tried to gaslight me? https://t.co/7DmADmoqUt pic.twitter.com/rSLE60pvoy

He said on Twitter: “Ok, well after further investigation with my eyes, these are cinnamon coated SHRIMP TAILS, you weirdos. I wasn’t all that mad until you now tried to gaslight me?”

The company asked for Jensen to send in the shrimp tails

After a series of DMs which Jensen shared on his Twitter, General Mills who owns Cinnamon Toast Crunch requested for Jensen to send in the shrimp tails.

Jensen agreed to send them off but said he would keep one as “evidence”.

Jensen said on Twitter he closed the box after he first discovered the shrimp tails but then went back in to look through it.

I was convinced to go back through the bag, since when I first noticed the shrimp tails, I freaked out and closed the box. Here’s all my findings, which also now includes a weird little string? pic.twitter.com/mRDUhqG3I8

He claims to have found more shrimp tails, a piece of string and a piece of floss. Jensen also shared images of the actual cereal pieces that appeared to have little black bits stuck in them.

Many Twitter users replied to him and said they were rat droppings. They said: “Mouse or rat droppings. Guaranteed they made a home in a bag of flour or other raw ingredient and all of the shrimp, string and everything else is their scavenged items.”

Yesterday on their Twitter account, Cinnamon Toast Crunch denied any involvement of what happened to the cereal box.

They said: “While we are still investigating this matter, we can say with confidence that this did not occur at our facility.

“We are waiting for the consumer to send us the package to investigate further. Any consumers who notice that their cereal box or bag has been tampered with, such as the clear tape that was found in this case, should contact us.”

Jensen revealed he is getting the cereal AND shrimp tails tested

The saga then continued with Jensen revealing on his Twitter yesterday he will be getting both the black bits in the cereal and the shrimp tails tested.

He revealed he was in contact with a lab about the cereal pieces and a research company is paying for the shrimp to have DNA testing.

Some updates: I am now in touch with a testing lab re: the “black things,” which I will not yet be calling by any other name for my own sanity. Also, a research company will be paying to DNA test the shrimp tail! (2021, y’all)

In a string of tweets Jensen said his main motivation in sharing the original tweet was many people are allergic to shellfish and General Mills did not address that, but just offered him a new box.

He wrote: “My point is – their initial reaction to shellfish being in the bag was to tell me it was sugar. Not to investigate the issue or look into it. It’s a deadly allergy to many (and non-Kosher) and that didn’t seem to matter beyond offering me a new box.”

Jensen later revealed a Carcinologist (crustacean researcher) who works at the Natural History Museum of Los Angeles to identify the shrimp using microscopy.

General Mills asked Jensen to give the cereal to the police

Jensen shared on his Twitter last night an email he claims to have received from General Mills in which they asked him to send the cereal to his local law enforcement.

I can’t believe this in a real life, publicly traded company. pic.twitter.com/v5fAz2SSyM

The email said: “If you are unwilling to send the items and cereal packaging to us, please provide these items to your local law enforcement. This may be product tampering and we need the opportunity to investigate the packaging.”

•Ok so what is a zillennial? And how do I know if I am one?