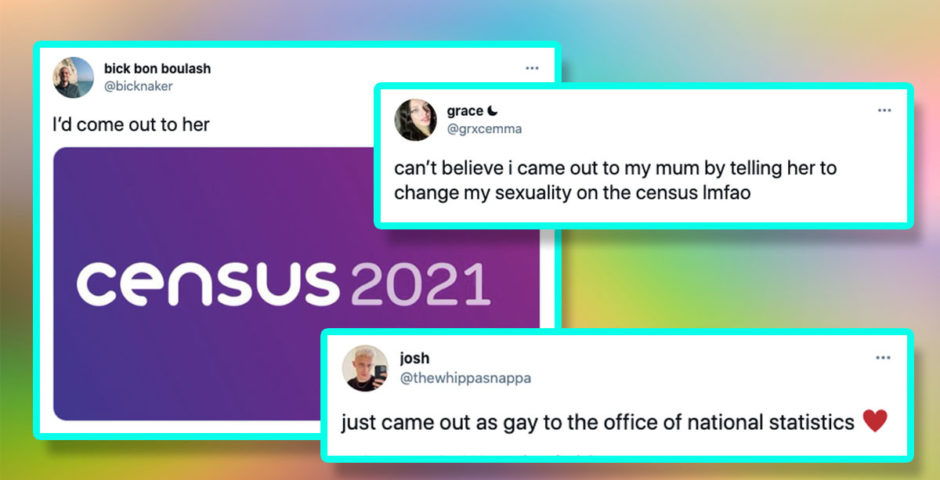 Anyone who’s LGBTQ+ has a coming out story, and every single one is personal and emotional. It can be incredibly hard and painful, or it can bring you even closer with your friends and family. Gay people have existed and been coming out for the whole of human history, but have suddenly had to face a brand new issue: The 2021 UK census.

For the first time ever, the government’s census included two (optional) questions about sexuality and gender identity. Obviously this is incredibly good for inclusivity, as well as meaning we can actually get proper data on LGBTQ+ people in the UK. The questions were voluntary and there was a super easy way of getting an individual access code, so anyone who didn’t want to be outed could fill out their census separately to the rest of their household. But lots people used the census as a way of coming out to their families, and of course have been tweeting all about it.

People used the census as a way of bringing up coming out to their parents and siblings, saying it may have not been the coming out they imagined but they’re glad it happened. Others said it felt like a big step to come out to the government. Whoever you’re out to – it’s a big win that should be celebrated.

Here are 21 tweets of people coming out via the census, which will make you feel seen:

just came out as gay to the office of national statistics ♥️

2. Okay so now Boris knows more about me than my own mum

Been out a whole 18 months now and I *still* got butterflies filling this in like I've only just broken free pic.twitter.com/9MAafojssW

4. Let’s add a little bit of … spice to that (I hope you read that in the TikTok voice)

my mum, filling in the census: “you’re bisexual, that adds a bit of spice to the household”

5. Not a little step! A big and important step!

Pretty nervous to put down that I’m bisexual in the census but I think it’s really important to have it recorded and it’s another little step forward with being open about who I am 🏳️‍🌈 pic.twitter.com/jYf9NxI6Dv

The census just put me in a position where I had to come out to my dad over FaceTime in front of my whole family…. but woo… I’m bi … and now the census and the family know 😭

Thank you to the census for helping me come out. Much appreciated 🙏

I’d come out to her pic.twitter.com/mb2GfTPJfz

Dad is filling out the census and had to come in to my room to confirm my sexuality. Bless him! 😂 pic.twitter.com/uw373SR6kZ

11. Okay but this brought a tear to my eye

very small thing but it was really lovely to record on the census that @CalumS1991 is my partner and that I am gay. The first time that information has been gathered on sexuality and preserved forever in history 🥰

12. This is what a year of lockdown has done

So mum either said I was gay or celibate on the census. Neither is wrong rn pic.twitter.com/c36N2PDimw

14. Catch me on June 21st wearing this entire outfit

Just completed the census and ticked the 'gay or lesbian' box for the first time. pic.twitter.com/EM8bg61Bcf

My sibling and I came out as non-binary to each other as we were doing the UK Census and I also came out as gay and them as pansexual. We also talked about how valid our identites are and the whole time my dad was like 👁👄👁

glad that im on the 2021 census as a gay, unemployed icon with mental health issues

got to fill out my census today and put that i am gay on an official document for the first time! we love to see it

18. She better be on her way right now, Boris

• It took three national lockdowns to accept myself as gay, but now I’m finally out

• I tried out a load of lesbian dating apps and here are the best ones, ranked