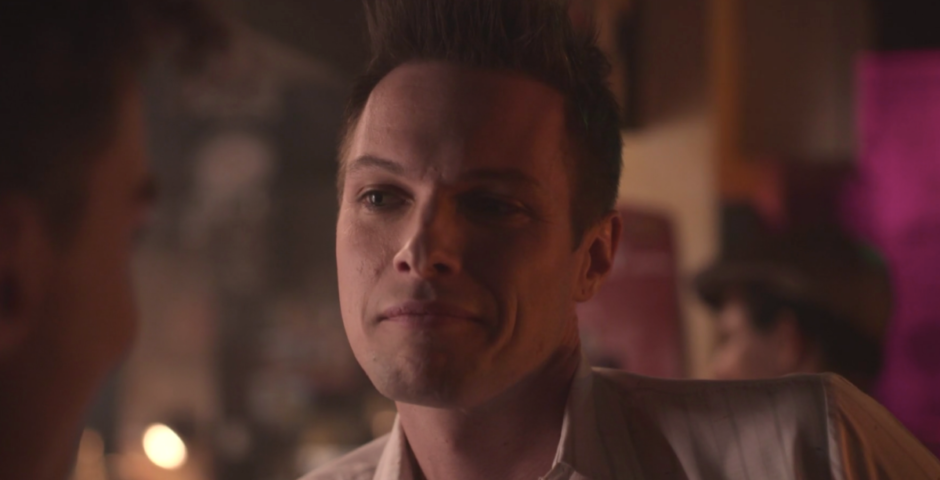 Nathaniel was diagnosed with HIV when he was just 16 years old, after the first time he ever had sex. Now, he is a 34-year-old actor who plays plays Donald Bassett in It’s A Sin, Ritchie’s boyfriend in episode three. Nathaniel J Hall has spoken out about living with HIV and the importance of telling the stories we see in It’s A Sin.

“The history of LGBTQ+ people so often goes unwritten or unseen,” Nathaniel J Hall said, echoing the sentiment held by many that It’s A Sin taught us more about queer history than school ever did. He said: “As a gay man living with HIV for almost 18 years it has been an honour to be involved in such a landmark production that has stamped a painful but important part of our community’s story loudly and proudly into the history books.”

Nathaniel told Radio 1 he was diagnosed as being HIV-positive just two weeks before his 17th birthday, and kept it a deep secret. He said: “I didn’t tell anyone, I didn’t tell my family. I lived with all that shame and all that stigma weighing down very heavy on me.”

Nathaniel J Hall as Donald Bassett, in It’s A Sin with Olly Alexander

Nathaniel says he got into a relationship with an older man while he was in school, as an “act of rebellion” from his “nice, safe, middle-class background”. “As a result I got that diagnosis just after I’d started college,” he said.

His diagnosis was “like a slap in the face”, Nathaniel told Radio 1. “It was like a wake-up call. All of a sudden I was like a child in an adult’s world.”

Speaking to Sky News, Nathaniel said his sex education at school was “pretty much non-existent”. He’d heard of HIV and AIDS, but before his diagnosis at 16 hadn’t thought of it as something that may affect him. He initially refused the test he was offered “because I just thought I couldn’t possibly have caught it.

“You know, I’m white, middle class, I was head boy at my school, I was like, it doesn’t happen to people like me, which is obviously a really ridiculous attitude to have because it can happen to anyone.”

He said: “I think it really wasn’t on my radar and there was a denial there because of the fear.”

As a gay man living with HIV it is an honour to be part of this incredible drama ❤️ https://t.co/UUtmtkV6KL

Writing for the i newspaper, Nathaniel said: “I know the shame associated with the virus well, but unlike the boys in the show, I was lucky enough to be diagnosed in 2003 in the era of medication.”

As we see on It’s A Sin, without treatment HIV can lead to AIDS, but things have changed dramatically since the 1980s. Now, with medication the virus can become undetectable, meaning those living with it are unable to pass it on. This is known as U=U, or undetectable equals untransmittable.

Nathaniel takes just one tablet a day, and his HIV-negative partner takes antiretroviral medicine PrEP: “If I think back to my younger adult years, I can’t even imagine this being the case. It’s a revelation.”

Nathaniel said: “It’s really important, if you’re HIV-positive, to access treatment and do it as soon as possible.”

This week is National HIV Testing Week, and Nathaniel told Sky he is working with HIV charity Terrence Higgins Trust to “counter all the myths and scaremongering from the 1980s”, that we see play out on It’s A Sin.

In the light of #ItsASin here’s my message about why BOTH are so important.

If you live in Manchester, are LGBTQ or a man who has sex with men, you can access free postal testing from @LGBTfdn #NationalHIVTestingWeek pic.twitter.com/U8Y40TgIjv

He’s also keen to destigmatise the virus for other groups who are affected by it, saying “in the gay male community, whilst stigma and HIV discrimination still exist, I think we’re… often it’s easier if you’re a gay man to say it or talk about it.” He tries to use his platform to help women, men who don’t have sex with men, and other people who may be “struggling to be open” about the fact they live with HIV.

It’s A Sin has been called groundbreaking, hailed as opening conversations around HIV that have been missing from our society for far too long, and Nathaniel has received much praise for sharing his experiences and showing how much has changed since the 1980s.

You can find resources from Terrence Higgins Trust, the HIV charity, here, including help, information and where to access testing.

• ‘I’m healthy in every sense of the word’: Young men on living life as HIV positive