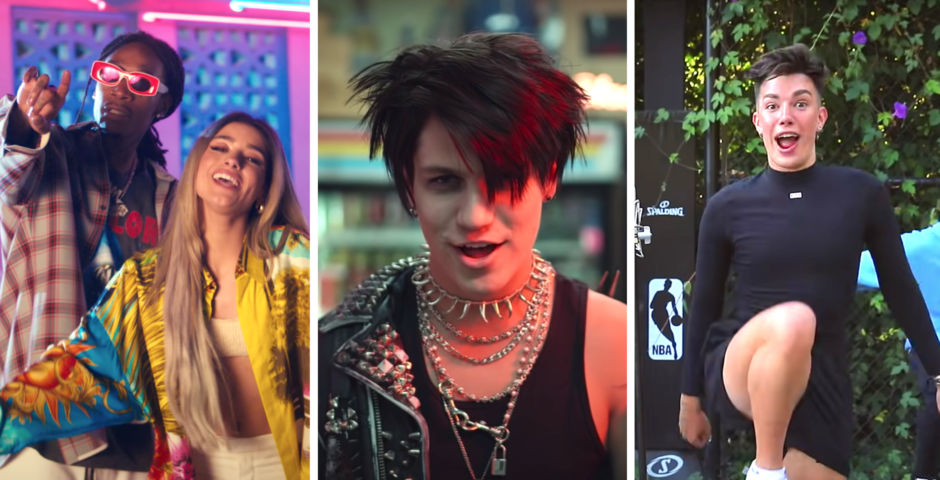 Ranked: The TikToker songs most likely to make your ears bleed

What is it with TikToker songs? What makes them feel the need to peddle anything they possibly can to their young and impressionable audiences? First it was merch which, although many people objected, it’s kind of a nice way for fans to show support towards their favourite creator. Then came the monopoly over other sites such as YouTube and Netflix. And now they’re at the final frontier – the music industry – and every one of the most famous TikTokers wants a slice of the pie.

But I’m not having it. So, unearth your highest-quality headphones from the drawer in the back room, put on your relaxing slippers with a comfortable place to sit, and grimace as we run through the most audibly challenging tunes from TikTok’s biggest stars, from most to least listenable.

First up we have Chase Hudson, who just this week released his first song “21st Century Vampire”, which is… all about life as a vampire in the 21st century.

What inspired this song is unclear, but if the recent rumours surrounding Arnie Hammer have anything to do with it then perhaps we should be keeping an eye on young Lil Huddy! Either way, the song itself is just the kind of thing you’d expect Chase to make as the kind of dude who looks like he loves Blink 182 and Yungblud, and it’s not bad at all!

We could rinse the BEATS™ product placement or the crude fake blood, but it’s just a good time from start to finish from one of the more likeable TikTokers.

The next competitor for the most questionable TikToker songs is Larray, who is tight with that whole popular gang of TikTokers, and with good reason. He makes slightly edgy content compared to them, and this offering is no different – the whole thing is designed to call out every modern content creator you’ve ever heard of.

It’s actually amazing that he calls out some of the creators that others are scared to, such as Jeffree Star and Tony Lopez – there are no complaints here.

Bella Poarch seems to be rather shy and retiring when it comes to her normal speaking voice, and up until recently hadn’t even been caught on camera speaking, so it’s a surprise to some that she actually has a really nice voice.

Although she hasn’t released any official songs or albums, she occasionally posts clips of herself singing accompanied with her ukulele. Not bad!

Queen Charli is still undisputedly at the top of the pile when it comes to TikTokers, but unfortunately, she hasn’t released any serious music. However, we weren’t going to let you leave empty-handed, so I’ve found some footage of her singing for your listening pleasure.

Yeah, I don’t think Charli’s going to be releasing an album any time soon, but this is clearly a joke and it’s funny.

Okay so Noah Beck and Dixie D’Amelio are the big TikTok couple right now, and clearly when he saw Dixie making big movements in music he clearly decided he wanted a piece of the action, and this is the result:

Okay, again obviously just a joke, but for someone who looks like he’s itching to get off to college to shotgun beers, play for the American football team and bash nerds to the floor, Noah seems like a pretty funny bloke. Could’ve tried harder, mind.

Dixie was probably the first TikTok star to stray into proper big budget music, and by the time she had just a couple of releases under her belt she released a tune with Wiz Khalifa. Unfortunately for her, many people had issues with the lyrics, and she ended up deleting the teaser on TikTok – but then released the whole song anyway.

Look. It’s not one of the worst TikToker songs (which is why it’s not at number one). It’s actually really really really really catchy, it’s just that the lyrics are a bit… terrible. Remember that time on YouTube where amateur musicians paid producers for a full song and music video? We were treated to tunes such as Rebecca Black’s Friday, Jenna Rose’s My Jeans and Alison Gold’s Chinese Food? Yeah, this is kinda similar.

And finally we have James Charles who is a YouTuber above all else, but that hasn’t stopped him lamenting himself as one of TikTok’s biggest creators. He spends most of his time with the top TikTok stars, whenever there’s a TikTok video referencing him he’s in the comments, and it just seems like he spends the vast majority of his time on the app. And then we get onto his music.

In his house tour, James showed us that he has an entire studio in the basement of his house for recording music and although the production value of this particular cover of Olivia Rodrigo’s Driver’s License does indeed seem good, he’s at the number one spot for the below attrocity.

This has got to be the worst of the TikToker songs, it just has to be. I think even James would agree that this was an absolute shambles.

• She’s the world’s most-followed TikToker, but who actually is Charli D’Amelio?

• Supercars and swimming pools: The TikTokers with the most expensive mansions

• Arrests, drug busts and Covid parties: All the times big TikTokkers messed up