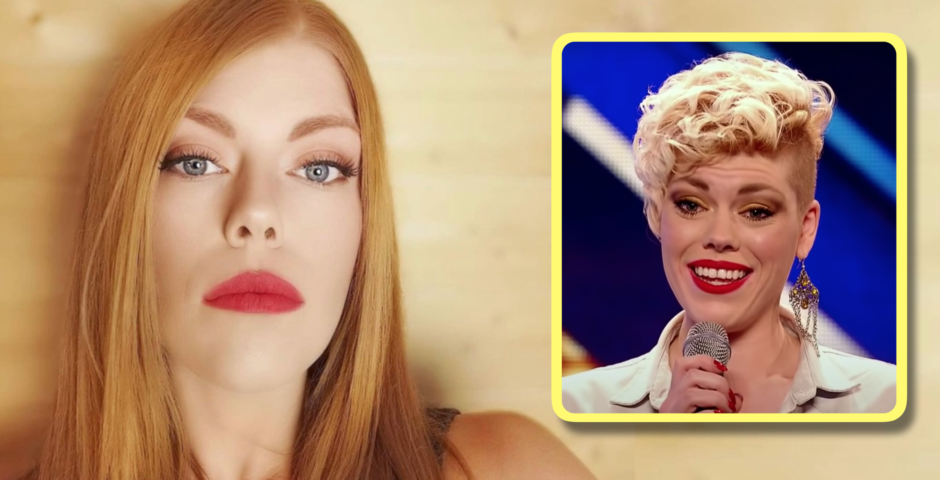 Zoe Alexander had been singing for as long as she could remember, performing as a Pink tribute act to make ends meet. When she finally decided that she wanted to be taken more seriously as an artist and grow beyond the whole Pink persona she had built, she found out that the X Factor was running auditions.

You don’t have to be an avid watcher of the X Factor to know what happened next – but if you are, you’ll remember it well. In 2012, she walked on stage and performed two songs. Neither went well, with the judges criticising her performance as being too similar to Pink.

Zoe unleashed a barrage of profanities, threw her microphone off the stage and assaulted a cameraman, with the entire situation being captured on camera for viewers at home.

The altercation most likely lingered in your mind for a bit – a classic confrontational X Factor audition. You most likely forgot, only remembering once it resurfaced in viral clips, but for Zoe Alexander, it lived on. Once the footage was released and the public saw what had happened, she fell into a deeply depressive place. She endured verbal and at times physical abuse from strangers, she was scared to leave her house and the whole experience even culminated in a suicide attempt.

From a viewer’s perspective, this looked like a bratty singer throwing a tantrum because she didn’t get what she wanted, but in reality, Zoe has been fighting for people to know the truth of what happened on that day ever since. Taking to TikTok to tell her side of events, people are listening by the millions. With over 600k followers, nearly 10 million likes and an army of angry people demanding justice for her, Zoe Alexander spoke to The Tab about what happened on that day and how the witch hunt afterwards drove her to her lowest point.

‘I had a nagging feeling that something wasn’t right’

Zoe Alexander knew that there was something wrong the moment she arrived at the venue for her audition. “I had a nagging feeling from the moment I arrived at 6am that something wasn’t right,” she told The Tab. “Throughout the day we all started to realise that the attention was totally focused on me whilst the other acts barely mattered. My family and friends all felt it but didn’t know why.”

Having spoken to producers beforehand, she had been assured to submit Pink songs despite wanting to pick songs that she thought demonstrated her vocal range better. After all, she wanted to move away from the Pink image that had followed her around as a performer.

As she walked out in front of the 5,000-strong crowd, Zoe’s confidence already knocked after an uneasy chat with host Dermot O’Leary, the ordeal began. “The moment it struck me that their intentions were not good was when I walked out on the stage – it was like looking into the faces of four executioners.”

From her song choice to her appearance, Gary Barlow, Louis Walsh, Nicole Scherzinger and Tulisa Contostavlos immediately began dissecting everything that she had been told to meticulously prepare beforehand. “They told me I had chosen the wrong song, that I wasn’t being myself, that I was just being Pink and I needed to find myself,” Zoe told The Tab.

Zoe stormed offstage, throwing her microphone and pushing a cameraman. All of the footage was caught on cameras that were dotted in the corners of every room. She believes the judges feigned shock and disgust at her actions, all the while trying to get as much of a reaction as possible. Outwardly, it was classic 2010s reality TV – a slightly dramatic contestant faced with judges exploiting the situation to make good telly. But Zoe felt set up by what had happened behind the scenes, that producers had misled her by asking her to sing Pink songs.

The weeks that followed were the darkest of Zoe’s life

Once the footage was released, Zoe’s life very quickly changed. The judges quickly jumped to the support of the program, with Tulisa saying during a press launch that Zoe’s meltdown was nothing more than someone projecting their issues: “That was one person, that’s her with her own issues and she chose to bring those issues to the stage.” Once another face in her town, she was suddenly famous as the X Factor girl who had the meltdown on TV.

“I was recognised everywhere I went; laughed at, pointed at, threatened. Both myself and my dad have been threatened with violence to the point that my dad had to physically defend us,” Zoe told The Tab.

“My relationship with society was so distorted following the audition that I felt as if there was no hope for me to be perceived in any other way than a violent and angry person who went into a rage because she had simply been told no. I was terrified to leave the house, even just standing outside of my front door people would drive by just to stop and stare.”

After the footage was broadcast, Zoe found herself in a deep and dark depression. “After the altered footage was broadcast, the ridicule and hatred intensified and my self-worth hit an all-time low, to the point of attempting to take my own life,” she said. “I luckily had the support of my friends and family, who knew what had really happened as they were there on the day and they are probably the reason I am still alive.”

As a full-time performer before her audition, Zoe found that work quickly dried up. To this day, she attributes her wellbeing to her dad, who was featured in the audition video. “I was ready to give it all up but dad encouraged me to carry on gigging, to get out and face up to it. He told me that if I curled up into a ball I would never come back from it.

“So I went gigging. I would stand looking at the audience and see people sniggering at me. People would come up to the front of the stage doing the X sign with their arms but I carried on regardless.”

Given Zoe’s defiance in the face of such trauma in the early days, it is maybe no surprise that she’s grown into a staunch opponent of reality TV. With her large following on TikTok, she is glad that she has a louder voice than ever to discuss this issue. “It’s fantastic that so many people are realising what reality shows can do to real people,” she told The Tab. “Reality TV takes advantage people. It both exploits existing and creates mental health issues. It psychologically profiles people by finding out their weaknesses and exploiting them.”

Back in 2012, nobody really spoke about aftercare for people who had been on reality shows. Despite the furore and the impact it had on her, Zoe said she never heard from ITV after the show aired. Now, ITV’s aftercare has been the topic of a parliamentary inquiry – thrown into focus after the death of Love Island’s Mike Thalassitis and Steve Dymond, a guest on The Jeremy Kyle Show.

Recently, Zoe made a TikTok in which she revealed that Nicole Scherzinger has blocked her on the app, but this is the only contact she’s had with any of the judges or people who work at ITV. “I have not had any correspondence with anyone since the story broke,” she said. “None of the celebrities have posted anything on social media because they do not want to face the people that know the truth.”

Looking to the future, it’s at least a little reassuring to see that steps are being taken to rectify these mistakes. The X Factor recently changed the title and description of the audition video. The title went from “Pink impersonator has HUGE TEMPTER TANTRUM!” to “Pink impersonator performs ‘So What'”. According to Zoe, the channel has also removed audition videos that she believes exploit others who haven’t spoken up, for fear of having evidence amassed against them.

“I am receiving so many messages of support, many from people who were there on that day and from hundreds of former victims telling about their mistreatment. I never considered that my story would resonate with so many and that there were so many people who have had similar unhealthy experiences with reality TV.

Zoe Alexander continues to make music and is currently studying for a degree in criminal psychology, with which she hopes to help other people who she feels have been damaged by the exploitation of reality TV. “Things have changed so much,” she said. “After spending the last eight years being perceived by the general public as the mentally unstable person from the X Factor, I now have so much support. And that’s going to take a little bit of getting used to.”

ITV did not respond to a request for comment for this story.

• Vote: Which was definitively the best performance on The X Factor?