The Great British Bake Off is about to begin its 11th series with the first episode of the brand new season starting tonight. And if we’ve ever needed a show that promises baking, comedy and wholesome vibes, it’s right now as we’re basically heading into a second lockdown.

However Boris Johnson is clearly unaware of the return of the greatest show to British TV as he’s scheduled his address to the nation at the exact same time of 8pm. Thankfully Channel 4 are aware of everyone’s annoyance at this scheduling conflict and have pushed the show back by five minutes so that it will start at 8:15pm. Crisis averted.

This scandal however is not the first to hit the bunting lined baking tent. In the last 10 years there’s been many a scandal involving the contestants and the judges from #bingate to Prue tweeting Sophie was the winner of the show before the finale aired.

Take a look back at the most scandalous moments in Great British Bake Off history:

The case of the custard thief

Brace yourself for one of the most dramatic scandals British TV has ever faced – the custard thief. In 2013 during a round in which the contestants had to make a trifle (is that really baking?) Deborah accidentally used Howard’s custard.

The mistake came from both their bowls being in the same fridge and Deborah took the wrong one out. Easy mistake to make but it caused national outrage and “Poor Howard” to trend on Twitter.

To relive the horror, watch the moment here:

The move to Channel 4 and Paul Hollywood’s betrayal

Look we all know Bake Off has gone down hill in recent years and that’s all due to the announcement that shocked the nation – Bake Off was moving to Channel 4.

And if that wasn’t bad enough Mary Berry was leaving, along with Mel and Sue. But one person who didn’t leave the programme and faced a lot of slack for it was Paul Hollywood. The silver haired judge your mum definitely fancies said his decision to remain with Bake Off was out loyalty to “future contestants”.

Whereas the women were said to have been loyal to the BBC. Either way people couldn’t get over his decision and ever since have boycotted the show.

Prue tweeting the winner before the finale

And this is why people over the age of 30 should not use social media. At the end of her first Bake Off series Prue took to Twitter to congratulations Sophie, the winner of that series, however she did it the day before the finale aired. 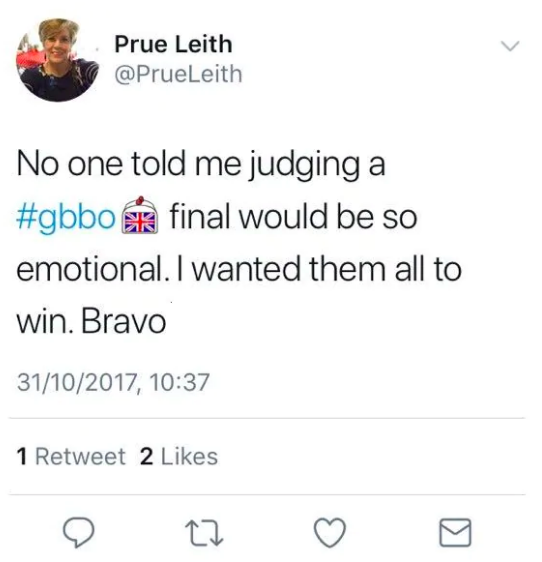 The apparent mistake was due to Prue being on holiday in Bhutan and the time zones confused her and so she tweeted her congratulations.

Yep you did read that correctly. Bake Off loves a sweeping picturesque nature shot in between bakes or at the beginning of the programme.

But in 2011 they showed a clip of a squirrel that was incredibly well endowed and had giant testicles that all viewers got to see.

FYI this is a baking competition. But clearly Enwezor Nzegwu had forgotten that and brought with him shop bought icing for his biscuit challenge in series five of the show. Naturally he was the baker that left that week.

As Bake Off hosts it must be pretty difficult to always think of a new joke to keep the show going along, there’s only so many soggy bottoms puns you can make. So Noel and Sandy did a little joke of Noel hiding in a fridge.

It gained a few laughs and over 50 Ofcom complaints. Yes really. 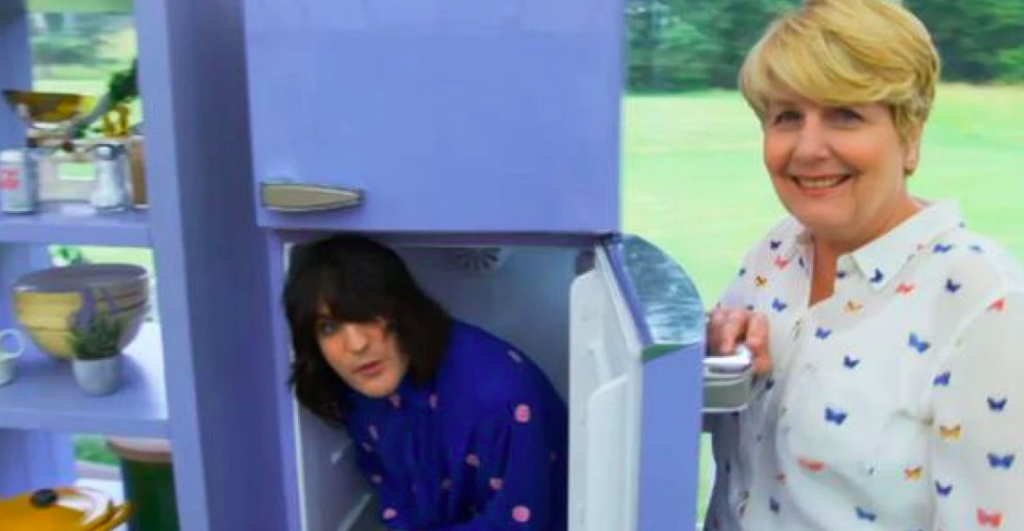 People thought Noel was setting a bad example and children would follow his lead of getting into their own fridges. Thankfully Ofcom decided the moment didn’t break guidelines as children were less likely to be watching at that time and fridges can open from the inside.

In series four in 2013 contestant Ruby Tandoh faced a load of hate and criticism for “flirting” with Paul. People even went as far as to suggest she was having an affair with him and that was why she was doing so well in the competition. Heaven forbid she got through on actual talent.

Ruby took on the trolls on Twitter and first of all tweeted that she was a lesbian and then another saying jokes on anyone who thought she would sleep with Paul Hollywood in order to get ahead.

She tweeted: “For those who thought I fancied Paul Hollywood or that I’d ever bang him to get ahead – JOKE’S ON YOU, YOU MASSIVE S**TTING MISOGYNISTS”.

And of course who could forget #Bingate

To this day there has never been a more dramatic moment to happen in the Bake Off tent. In series five the bakers were tasked with making a baked Alaska on one of the hottest days of the year.

Everyone was struggling with getting their ice cream and then Diana did the worst thing. She took Iain’s ice cream out of the freezer.

When he found out his ice cream was taken out and melted all over the place, he himself had a meltdown and proceeded to dump the whole dessert in the rubbish and presented the bin to Paul and Mary when it came to the judging.

The BBC later clarified Iain’s dessert had been out of the freezer for less than a minute and he was eliminated because he didn’t present anything to the judges.

Diana also commented on the controversy blaming it on editing and claiming she had “been stitched up”.