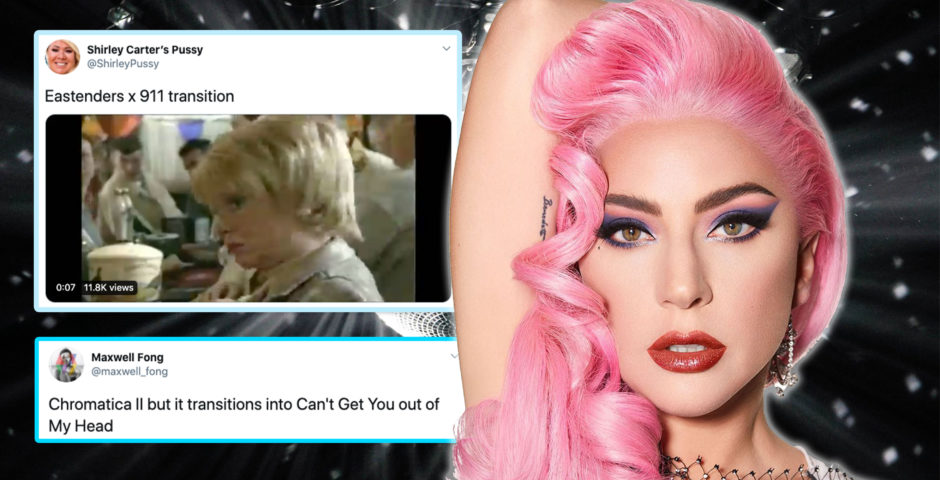 Please award the Gemma Collins one a BAFTA

Gay Twitter truly is a wonderful thing. While Fiat 500 and football Twitter need a balanced diet of casual racism, homophobia and memes about Love Island to stay satiated, all the LGBT+ community needs to get by are 30 seconds between songs on a Lady Gaga album. Yes *that* transition between interlude ‘Chromatica II’ and ‘911’ on Gaga’s newest album has given birth to some very creative memes indeed, most of which oddly feature iconic clips from British soap operas. The mind truly boggles. But you did not click on this article for a rambly introduction. You know what you’re in for and we’ve got all the best Chromatica II 911 transition memes right here in one handy-dandy article.

These are the best Chromatica II 911 transition memes on the internet right now:

Chromatica II but it transitions into Can't Get You out of My Head pic.twitter.com/UXQ7qTGt0M

to all the chromatica lovers, and in honor of @canadasdragrace coming soon, i tried to match the chromatica II to 911 transition with brooke lynn’s runway ruveal… @Bhytes1 ❤️ pic.twitter.com/fz5hBZvtgf

4. Can you imagine if they’d actually done this?

7. I don’t remember this happening but wow

9. He couldn’t hear Gail over the sound of Gaga

10. They should just replace the duff duff with this

11. Side note have you seen Gail’s hair these days? Wtf is going on?

12. Loads better than the weird music they play in the actual film

Call Me By Your Name dance party scene cut to Chromatica II into 911 transition pic.twitter.com/TlTsXBt5VD

14. Can’t wait to see how this inspires the Tangled sequel

Anyway here’s the scene where Mulan leaves home cut to the transition from Chromatica II into 911 pic.twitter.com/wN8BLQ3usc

16. Sadly I do not have a trampoline that cool… or heels

This is the ONLY way the Chromatica II to 911 transition should make you feel pic.twitter.com/yvNL8dJadZ

18. Tomb Raider crossover. We love to see it

19. Spongebob is a queer icon, after all

*Chromatica II transitions to 911*
Me: pic.twitter.com/NmQOcMoJkq

Couldn’t save the video because my laptop was having a moment but I made a Chromatica 2/911 Transition video of the slave trader statue being thrown in the river in my hometown. Enjoy! #BLM pic.twitter.com/7IqOalmNwo

21. The gays will always stan

Our reaction to the transition from Chromatica II to 911 💞⚔️ #Chromatica @ladygaga pic.twitter.com/kfpQ0bMi6I

• What is the ‘don’t leave me take me with you’ challenge taking over TikTok?

• Stop whatever you’re doing: Netflix is releasing a sequel to Chicken Run

Featured image via Instagram (@ladygaga) and Greyson Joralemon on Unsplash