A leading scientist said they ‘should be ashamed’

The 5G coronavirus conspiracy theory has really kicked off over the weekend, after a bunch of celebrities are sharing the theory all over their social media.

From reality stars like Lucy Watson and Calum Best to legit famous people like Woody Harrelson they’re all showing an interest in this theory.

The 5G conspiracy theory suggests that the new 5G towers are a cover up for depopulation and are spreading coronavirus.

And now the 5G conspiracy theory has made the mainstream with the NHS England medical director Stephen Powis calling the theory: “Complete and utter rubbish, it’s nonsense, it’s the worst kind of fake news.”

A Southampton uni researcher Dr Michael Head has criticised celebrities for spreading the 5G theory and said they should be ashamed of themselves.

He said: “The celebrities fanning the flames of these conspiracy theorists should be ashamed.”

These are all the celebrities who are getting involved in the 5G coronavirus conspiracy theory:

Last week Lucy Watson tweeted “Fuck 5G” but didn’t make it 100 per cent clear if she was referring to the coronavirus theory. Many users replied to her tweet asking her to remove it as it was “irresponsible” and “counterproductive” to share the theory.

A few days later she tweeted about sharing some good news and when a user replied to her asking her to delete her tweet about 5G, Lucy said: “When did I ever say 5G causes coronavirus.”

Calum Best also jumped on the 5G coronavirus bandwagon last week. On Instagram he posted a picture which read “Say no to 5G” and included a link to a YouTube video. 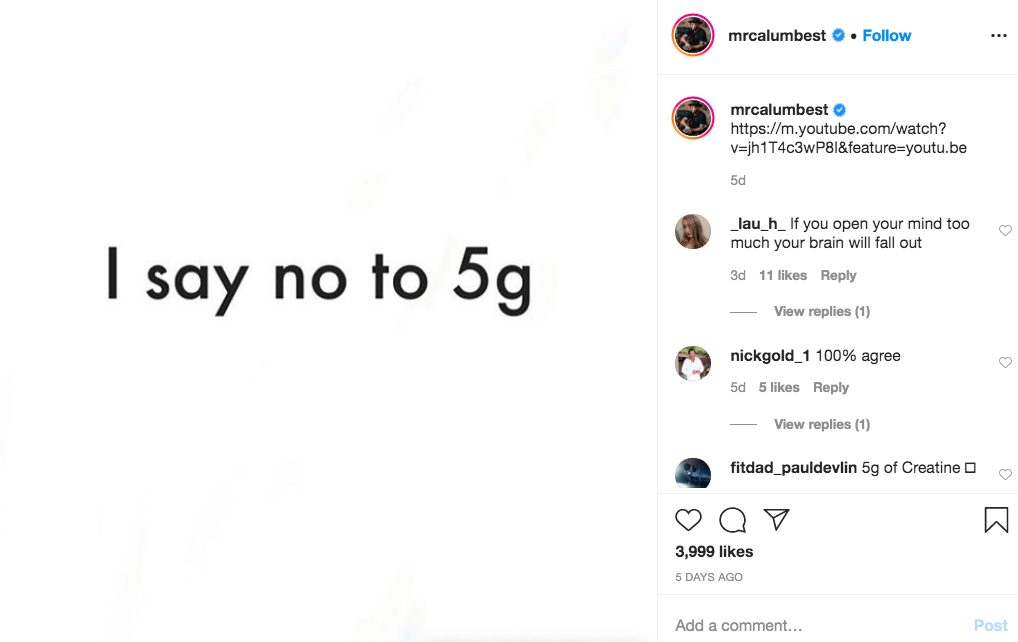 The video by Dr. Thomas Cowan suggests 5G is the cause of coronavirus. He suggests in the video that Africa has not been affected by coronavirus because it is not a “5G region”. There have been nearly 10,000 cases of coronavirus across Africa.

Lee Ryan has shared a number of conspiracy theories over the last few day, including the 5G one. He posted all his theories on Instagram, but has since deleted them.

He claimed the government is controlled by the devil and soon we will all be chipped. Lee also shared a theory about 5G causing coronavirus.

Many of his followers supported him, with one suggesting Lee would soon be found to have committed “sucide”. They said: “Next thing we know u will have ‘committed suicide’ all because your speaking out and telling the truth.”

Lee then replied calling “suicide” a “stupid sin” causing many of his followers to get into argument about the term. Lee said: “F*** no… I would never do that – that’s a stupid sin. I’ve never conformed to what the government spill… they lie like a cheap watch and people believe whatever time they say it is – even if it’s night they will believe it’s day if they’re told it is x”.

Lee has subsequently removed the posts about conspiracy theories.

A few days ago Woody Harrelson shared a post about coronavirus being linked to 5G. Woody said in his post he hadn’t fully vetted the claims but lots of his friends had been talking about the negative effects of 5G.

He said: “A lot of my friends have been talking about the negative effects of 5G. My friend Camilla sends this to me today and though I haven’t fully vetted it, I find it very interesting.” 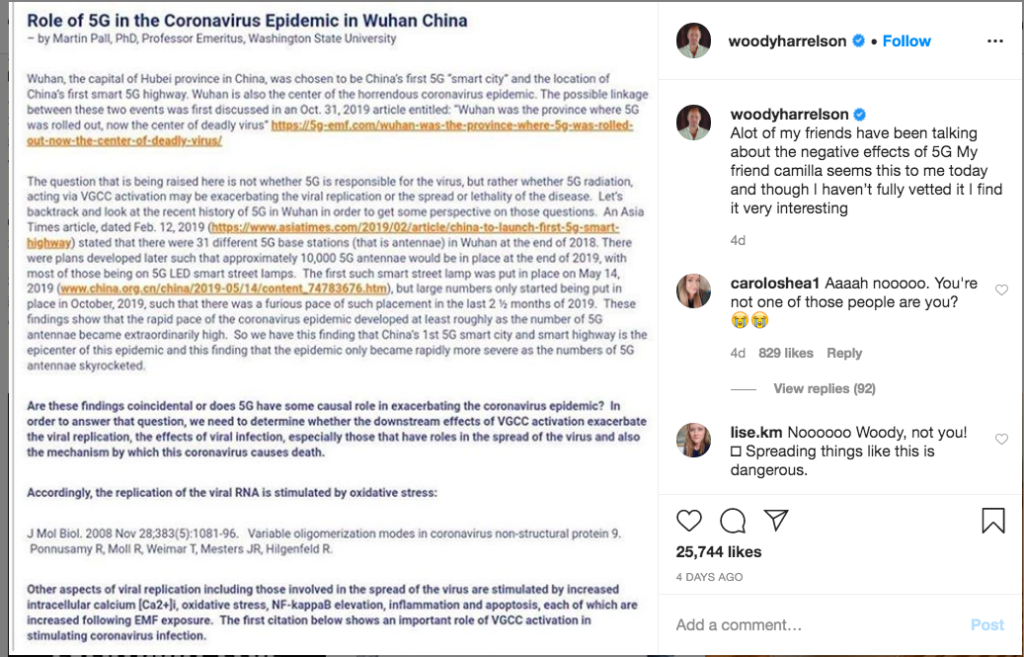 Woody also shared a video claiming “the Chinese are bringing 5G antennas down”. Many of his followers commented saying the video was from the student protests in Hong Kong who were taking down facial recognition cameras. 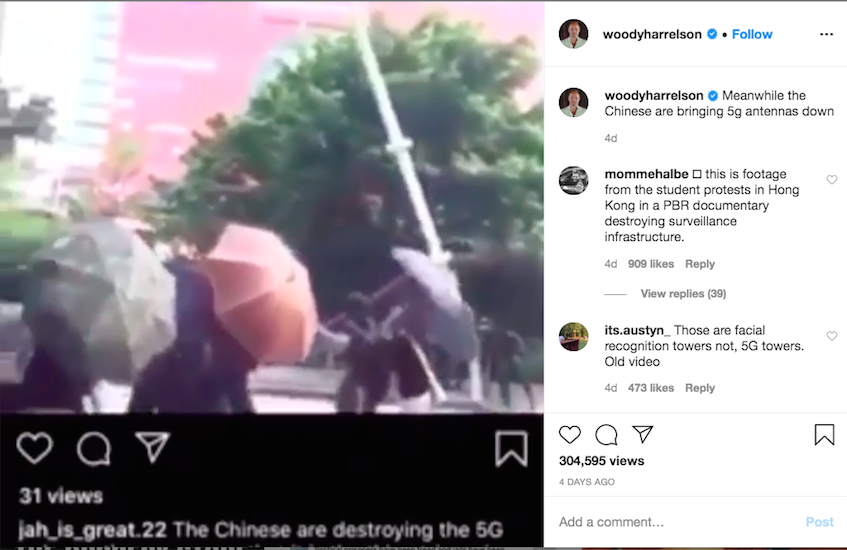 Amanda Holden tweeted a petition to the government to stop 5G. In the now deleted tweet Amanda shared the petition called “The government: NO TO 5G!!!!”

A representative for Amanda said she was emailed the link and did not know she had tweeted it, and they emphasised Amanda doesn’t believe in the conspiracy theory. They said: “Amanda was sadly emailed a petition suggesting 5G is linked to coronavirus, did not know she’d accidentally tweeted a link to it, and does not believe in 5G conspiracies.”

The original conspiracy believer Keri Hilson began tweeting in mid March about the theory. In a string of now deleted tweets Keri wrote suggesting 5G towers are producing huge amounts of radiation and this is what is causing coronavirus. 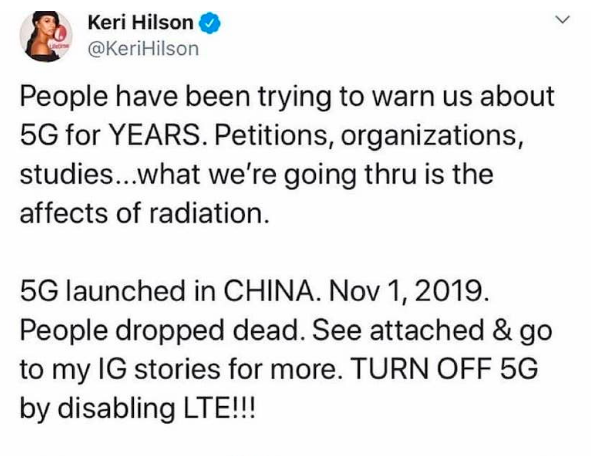 Keri urged her followers to turn off 5G and she said people have been trying to warn us about 5G “for years”.

She has since deleted her tweet theories after sharing on Twitter her management had requested she remove them.

•What is the coronavirus 5G conspiracy? The dumb theory circulating the internet rn

•These are all the dumb af coronavirus conspiracy theories, created by idiots