Some students will be unable to graduate because of the upcoming strikes, a leaked email between Students’ Union presidents has revealed.

In an email chain between over 70 SU presidents obtained by The Tab, Jackie Yip, Cardiff SU’s president, says: “Confidentially, further strike action will now mean some of my students will have missed so much content that they will not be able to graduate this year, even if there are mitigating actions put in place.”

“We have not told students this as we do not want to cause panic,” the email adds.

The Tab has independently verified the email, sent on Tuesday, which discusses SU support for the upcoming strike action.

Universities across the country will be hit with a further 14 days of strike action at the end of the month, after the UCU voted in favour of action over pay, conditions, and pensions. 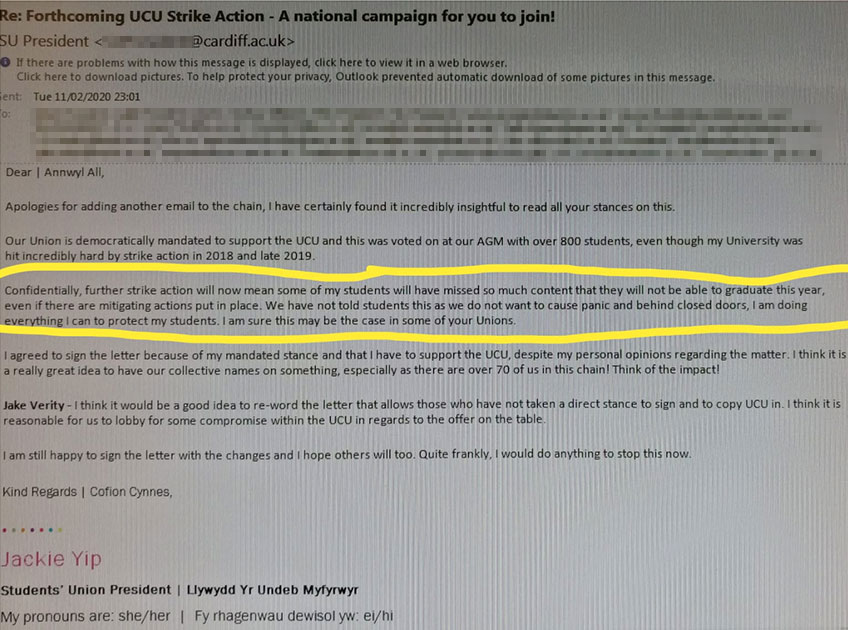 The email reads: “Our Union is democratically mandated to support the UCU and this was voted on at our AGM with over 800 students, even though my university was hit incredibly hard by strike action in 2018 and late 2019.

“Confidentially, further strike action will now mean some of my students will have missed so much content that they will not be able to graduate this year, even if there are mitigating actions put in place. We have not told students this as we do not want to cause panic and behind closed doors, I am doing everything I can to protect my students. I am sure this may be the case in some of your Unions

“I agreed to sign the letter because of my mandated stance and that I have to support the UCU, despite my personal opinions regarding the matter. I think it is a really great idea to have our collective names on something, especially as there are over 70 of us in this chain! Think of the impact!

“Jake Verity [Sheffield SU president] – I think it would be a good idea to re-word the letter that allows those who have not taken a direct stance to sign and copy UCU in. I think it is reasonable for us to lobby for some compromise within the UCU in regards to the offer on the table.

“I am still happy to sign the letter with the changes and I hope others will too. Quite frankly, I would do anything to stop this now.”

The secret admission lays bare the potential impact of the strikes on students, with the upcoming action the third round students have faced in three years. The Tab understands other universities are facing a similar situation to Cardiff, and declining to tell students, with some presidents having been told outright that some students won’t graduate.

Students’ Union presidents, mandated to support the strikes by their SUs but privately concerned about the impact on students, believe they are caught between a rock and a hard place. They are due to sign a letter – as discussed in the email – calling on UCU and USS to come to a swift resolution.

Jackie Yip told The Tab: “In November we were mandated to support the strike action by our students, we have been working closely with UCU since to promote their cause.

“As a Students’ Union our priority will always be our students, both those that will be campaigning on the picket line and those who are concerned about the teaching they are missing.

“We want to highlight all potential real impacts this second round of strikes could have on our students. There’s no clear definitive answer on what these impacts will be, that’s why we haven’t spoken publicly about this yet.

“We are of course, working to mitigate any impacts and continue to lobby the University and national stakeholders in bringing this strike action to a close with a good result for all parties involved.

“Students wanting to find out more information from the University should attend a Town Hall meeting with the Vice-Chancellor on Wednesday at 12pm in The Great Hall.”

In a statement, Cardiff University did not answer questions on which students would be affected, or why students were not being told. A spokesperson told The Tab: “The University’s number one priority is to support our students throughout the strike action.

“We continue to work alongside our academic Schools to manage the forthcoming dispute. As part of this work we need to plan for the worst possible outcomes in order to avoid them.

“We are deeply appreciative of the academics who have supported us in this endeavour and will carefully monitor the situation in the forthcoming weeks of industrial action.

“We continue to urge UCU to engage constructively with on-going and continued discussions in order to avoid further strike action.”

Do you know more about this issue? Get in touch confidentially at gregory@thetab.com

• Confirmed: Unis will be hit with two more weeks of strikes
• Wheelchair-using student forced to sit in stairwells during lectures
• Family of student who jumped from St Paul’s not told he missed two months of uni