The Cats movie reviews have come out and they are savage.

There is 100 per cent consensus across every news out let, blog and Twitter that this is the worst movie to ever be made.

The film is essentially a CGI version of Andrew Lloyd Weber’s stage show adaptation of T.S. Eliot’s collection of poems about different cats. In the adaptation, a group of cats called the Jellicles must compete in a singing competition to decide which ascends into cat heaven and come back with a new life. Yeah. That’s the plot.

The Guardian’s Peter Bradshaw wrote his scathing review in the style of T.S. Eliot’s poem, which, whilst clever, is honestly pretty tame in comparison to the other reviews.

Here are all the best reviews to convince you that should you never waste two hours of your life on a film as shockingly horrifying as this and be prepared, there’s a LOT:

“A doctoral thesis could be written on how this misfire sputtered into existence.”

“Think X Factor, but minus Simon Cowell, and with cats instead of contestants with emotional backstories.

“Some might say you’ve not lived until you’ve seen Taylor Swift head to toe in fur, Dame Judy Dench sporting a ginger beard Henry VIII would be proud of and James Corden dressed as a fat cat in spats.

“Others would say they are images you’ll struggle to erase for years to come.”

“There are enough disturbing scenes here to scar you for nine lives. It’s hard to decide which aspect of the film made me most uncomfortable, but there’s certainly no shortage of contenders.

“It’s never less amusing than when it’s actually trying to be funny, with much of the comedy – provided largely by Corden’s Bustopher Jones and Rebel Wilson’s Jennyanydots – falling flat.” 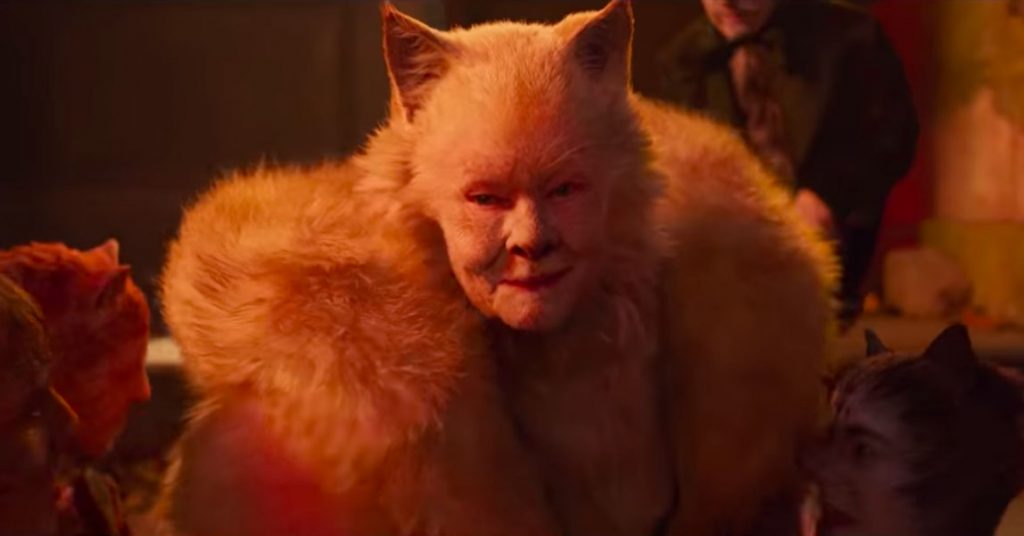 “The harsh truth is the film feels plastic, it has no heart or soul.”

“I’ve only just recovered from his 2012 adaption of Les Miserables, and now he’s returned to terrorise me again with this.

“James Corden and Rebel Wilson are a unique form of horror at the best of times.

“I’ve no idea why they’ve squandered so much money on the ‘digital fur technology’, as it still looks as if the cast are leaping around in makeup and furry costumes.

“It left me feline embarrassed for all concerned.”

“But there are so many other things wrong with it, so many eye-meltingly bonkers moments, so many baffling creative choices that only raise questions.

“Why does Judi Dench wear a coat that seems to be made of her own fur? Why is ‘Memory’ — a rare moment of pathos and arguably the only good song — delivered by Jennifer Hudson with a face covered, distractingly, in snot?

“Neither human nor cat, they all look like laboratory mutants put through a Snapchat filter.

“It is unbelievable that it even exists. Like a miserable, flea-bitten old tabby who should have been put down a long time ago, it’s hard to begrudge, at least.”

This is the film critic’s first time giving zero stars since 2010 for the film Old Dogs. ZERO!

“Once seen, the only realistic way to fix Cats would be to spay it, or simply pretend it never happened. Because it’s an all-time disaster – a rare and star-spangled calamity which will leave jaws littered across floors and agents unemployed.

“Meanwhile, the Frankensteinian marriage of live performance, ‘digital fur technology’ and human/cat anatomical splicing – the boobs! they have boobs??!!

“Jokes don’t save us, since Lee Hall’s script tries every cat idiom in the OED to find a funny one.

“When J.Hud hobbles amateurishly into the ball for a double-the-pathos reprise, my adjacent colleague was reduced to a senseless, cackling wreck for a full minute.”

“The new addition to the soundtrack, “Beautiful Ghosts”, written by Swift and Lloyd Webber, is instantly forgettable.”

“After finally seeing the film I felt, well, confused. And also lost, amused, tested and terrified.

“For starters, that morbid plot, or lack of one, concerning alley cat cult the ‘Jellicles’, competing to go to kitty heaven through song, is completely deranged.

“Most don’t interact and few are around long enough to form an opinion on.

“In Corden’s case, that’s a blessing. His well-heeled Bustopher Jones is excessively, dangerously camp. It has me dreading Jack Whitehall’s gay character in 2020’s Welcome To The Jungle.

“Truly, at times, it was like watching a horror film.”

“Are all the cast being held hostage? Who thought this was a good way to spend $95million?

“Including the most pressing — where are their bumholes? Why? Well, because absolutely jack all happens in this film.

“Nearly as obscene as The Human Centipede.

“It all just feels so wrong. Whether they are human or feline, what on earth has happened in those smoothed out groins, so much exposed by the leotards? And let’s not think about those tails that keep erecting for emphasis.

“Perhaps musical fans will love it anyway? Perhaps. They are one of the permanent mysteries of life.” 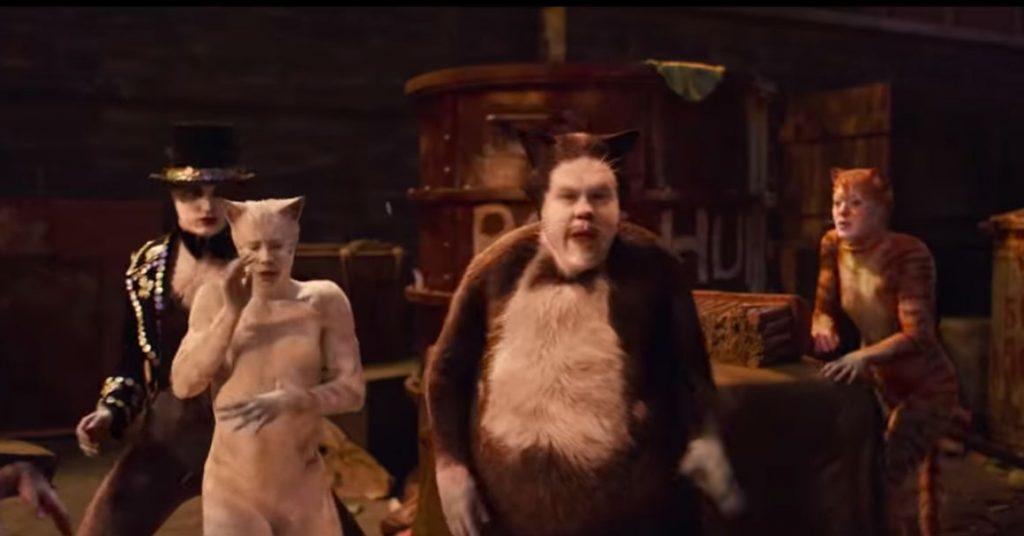 “Nine may not be enough lives for some of the stars to live down their involvement in this poorly conceived and executed adaptation of Andrew Lloyd Webber’s hit musical.

“Director Tom Hooper’s outlandishly tacky interpretation seems destined to become one of those once-in-a-blue-moon embarrassments that mars the résumés of great actors.”

“While the intention here was no doubt to make Cats a visual feast, it ends up being something that’s a struggle to pay attention to.

“Disappointingly, Cats is a mess at best and a chore at its worst.”

“The ‘CATS’ Movie Is a Boring Disaster Filled With Joyless Pussies.

“The Jellicle Ball is essentially Burning Man for the kitty cult, yet it’s somehow rendered so staid and lifeless here.

“How is it that nearly every character makes a reference to their private parts, yet there were no private parts to speak of?” 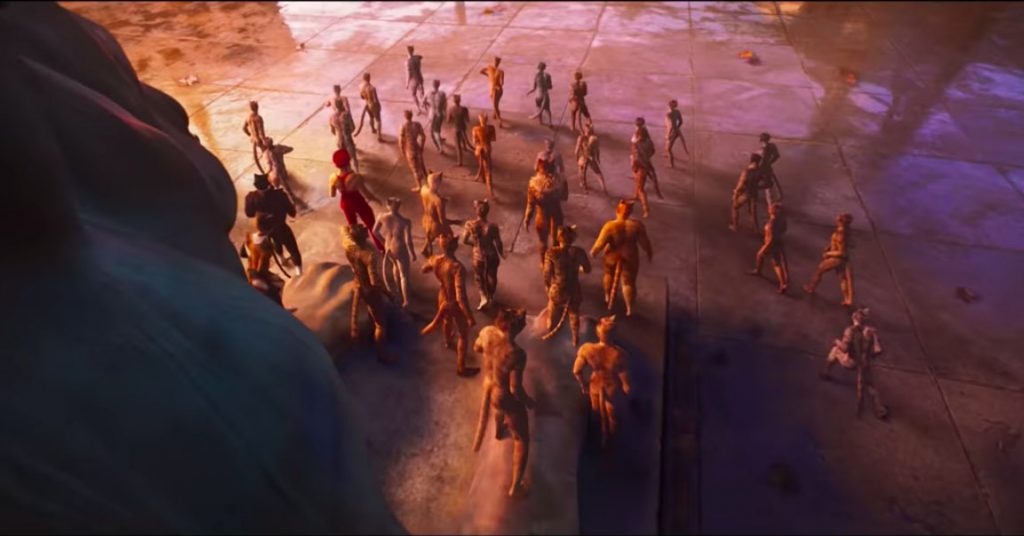 “I Have Seen Sights No Human Should See.

“I have been processing this movie for the last 24 hours trying to understand anything as terrifying and visceral a trainwreck as Cats.”

And these tweets couldn’t not be included:

They CGI all the dudes packages, but none of the women's breasts, so that was… a choice.

•The 34 best memes about the nightmarish Cats movie trailer

•These are the 28 best woman yelling at cat memes ever