The past week has turned into a bizarre apology tour for Jo Swinson. At every turn, she's saying sorry for the Lib Dem record in coalition, and being constantly asked whether she was too bold for saying she could be prime minister.

In fact, it could be said the Lib Dem campaign hasn’t gone to plan. With polling day about 36 hours away, Lib Dem support has faded in the polls. But there’s everything to play for, and it’s time for one last blitz of media appearances.

As she talks to The Tab, the Lib Dem leader is fresh from appearing on the This Morning sofa with Holly and Phil, and is on her way to Bath to speak to party activists.

• She’s sorry for breaking her tuition fees promise, but defends the choice not to pledge to cut fees now

• She prefers Pret to Greggs

• She was “a bit crap” at rolling joints at uni

The very obvious question for Jo Swinson is tuition fees. Over the past week, she’s been apologising for voting to raise tuition fees, as though someone’s told her standing in the market square and being pelted with tomatoes is the way into number 10. "I think the mistake was breaking our word. We said we wouldn't do it and we did,” she tells The Tab. "And, and that was just, you know, fundamentally wrong.” Swinson talks about more disadvantaged people getting in to uni as a result of higher fees, “but in a sense, that wasn't the point. The point was what we said. That's why I'm sorry about that. I think we're right to apologise.”

The Lib Dems haven’t sought to reverse the hike with their new manifesto. So was it increasing the fees that was wrong, or going back on her word? Swinson says low fees was a good policy before the crash, but in 2019 "we haven't made the decision that this is the most urgent use of public funds.” She talks instead about helping children in early life, and points to Lib Dem plans to reverse Tory cuts to maintenance grants and nursing bursaries.

Yet, Swinson voted to cut benefits and scrap the EMA whilst a minister, I point out. What’s changed her mind on the level of support people need in education and wider life? She returns to the theme of hard choices made: “We were in the context of making some pretty horrendous decisions in the aftermath of a financial crash. None of those things would have been policies that I would have wanted to do. Or that I got into politics to do.”

That’s as maybe, but should students forgive her for her record in coalition? “People always have their views on tuition fees, and I'm encouraging them to not only look at tuition fees, and to recognise there were other things that we did that have, you know, made a real positive difference for students,” says Swinson, highlighting the Lib Dems’ coalition achievements on renewable energy, equal marriage, gender pay gap reporting. “Don't assume that our record in coalition government can be boiled down to one single policy." 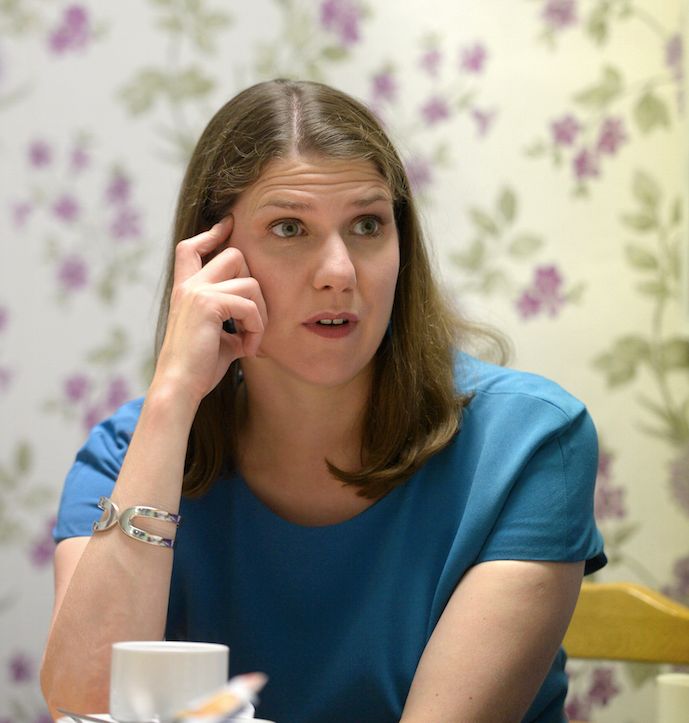 Swinson is candid about the fact she smoked weed as a student at LSE in the late 90s. She told reporters last week it “wasn’t just one, and I did inhale.” But for all that proficiency, could she roll a joint? "Yeah, but I was a bit crap at doing it. It was not my forte. Let me put it that way,” she tells The Tab.

Whilst at university, Swinson survived a sexual assault, which she opened up about last year. “He was about to do something horrendous and I managed to get him to stop,” Swinson told the Mail on Sunday. “I told him, ‘If you make me, that’s rape’.”

Now, she thinks universities can do more to tackle the problem. “The figures for how many people experience harassment in education settings, whether that's at school or indeed also at university, it's really shocking,” says Swinson.

Along with changing the culture around consent and stereotypes – "there's still there's still a long, long way to go on that” – Swinson says unis “definitely need to get better” at tackling sexual assault. She ties it in to the overall support universities can offer students.

The Lib Dems plan to introduce a “legally binding charter on mental health”. Swinson wants people to be able to see uni mental health waiting times before they apply. Under Lib Dem plans, unis "would have to guarantee that mental health services be available to students, guarantee a certain standard, record and report what waiting times people have, and make sure that people could access that information about, you know, what the waiting times are even before they decide where they're going to apply.”

She adds: "What we really want to get to is enabling everyone to try, and have all universities aiming to have, zero suicide." 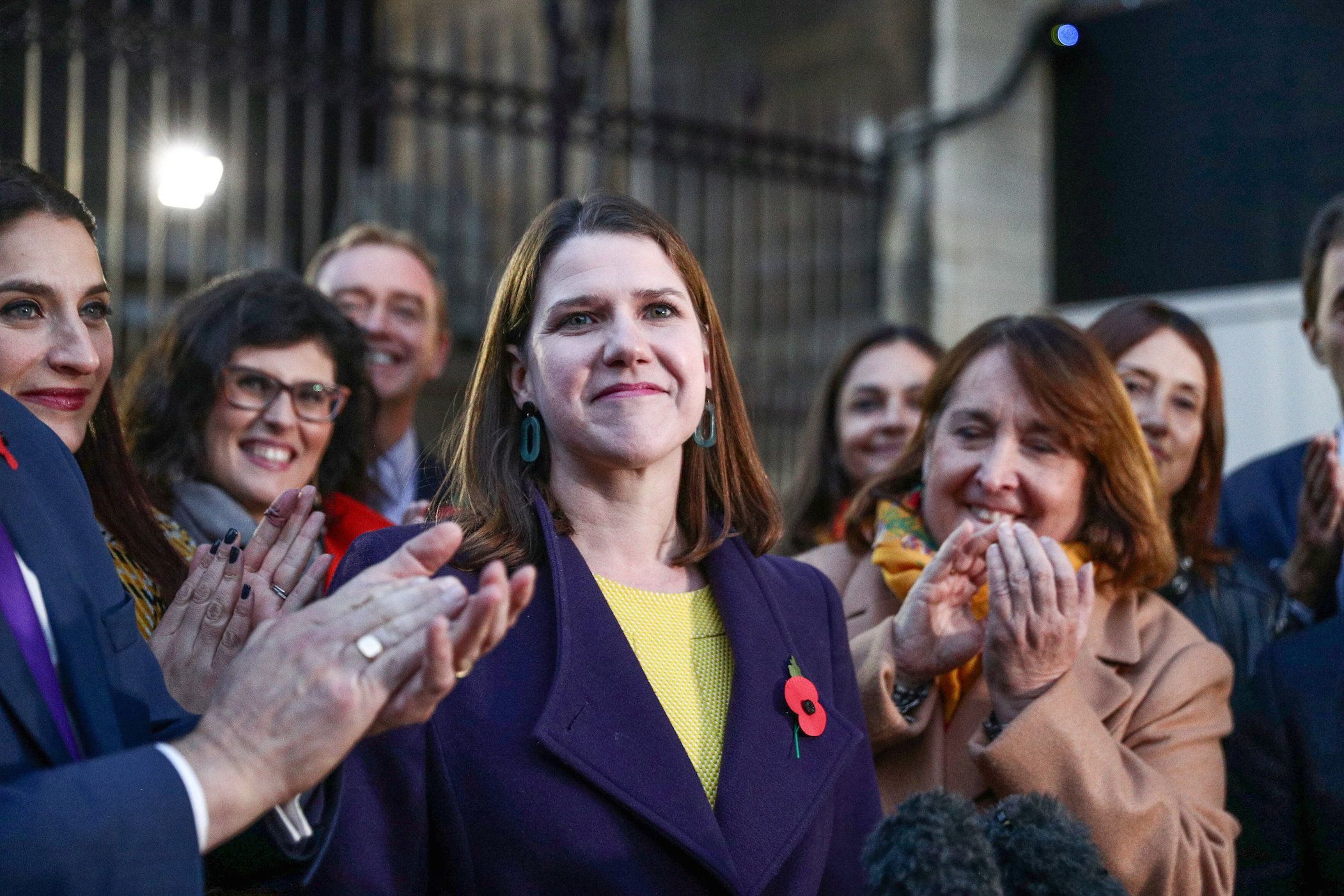 One of the many charges levelled at Swinson is that she’s a “Yellow Tory”. Apart from denying this with an almost Alfie Deyes-level bluntness – "it's obviously not true” – Swinson cites how she got involved with the Lib Dems at LSE’s Freshers’ fair in 1997, and has been going ever since. "It's not true but part of being a politician is being attacked and you kind of get a bit used to it and grow a bit of a thick skin. Because I'm not going to be stopped standing up for the things that I want to achieve and the things I want to change."

What about Pret or Greggs? Labour Shadow chancellor John McDonnell was quick to choose Greggs. What about Swinson? "Pret. I really like their yoghurt covered cranberries,” but reveals she’s “not really a Nando’s person”.

For somebody who’s had to admit either Boris Johnson or Jeremy Corbyn will be prime minister, she’s completely unenthusiastic about both. In three words, she’s scathing about Boris Johnson: “Doesn’t fucking care.

On Corbyn, she points to his handling of Labour's antisemitism scandal. "This has not just been something come up in the last few weeks, right, this has been an issue for years. And he's still not dealt with it. And that just tells you something about the importance that he puts on this, or frankly, how little importance.”

Pushed for three words on the Labour leader, she goes with: "Disappointing, neutral,” then a pause. "No, I've only got one word left to just sum up the…three words is hard, right? Because I want to mention… okay, antisemitism. That's my final word."

‘Not into HnH, or femmes, sorry just a preference’

‘I felt I was riding a horse’: Pensioner tells wild sex story on This Morning

It’s being called the greatest TV moment of the year