Pro-life group 'Birmingham Students for Life' have been at the forefront of controversy this year as they fought to be recognised by Birmingham's Students' Union as a society. Although Birmingham grabbed the headlines, many pro-life groups in the UK have been campaigning to join their respective Student Unions this year, arguing being barred would violate their right to free speech.

After vigorous campaigning, Pro-life groups at Birmingham, Nottingham, Glasgow and Aberdeen have won their appeals to be members of their Students' Union after they were previously turned away under a no-platform policy.

While the UK government is pushing to legalise abortion in Northern Ireland, at universities pro-life groups are campaigning for abortion to remain illegal. These are the 13 pro-life societies currently active on UK campuses.

Speaking to The Birmingham Tab when the ban was lifted, Birmingham Students for Life said: "Whilst it may not be a popular public opinion to have pro-life views, there are many students on campus who do hold these views and we are pleased that the guild has recognised this and given us the freedom to be a society and have a platform where we are able to meet and discuss matters that we believe to be important."

Birmingham's Women's Officers, Alif Trevathan and Holly Battrick, said: "Freedom of speech is undeniably an important value in our society, but this should not come at the cost of other people's safety". Speaking to The Independent , they also said multiple students had been in touch to express their worries regarding the pro-life group being active on campus.

Here you see some of our amazing students standing up to the NUS for shutting down their voices on campus. Our voices will be heard. #biasedNUS #prolifestudents #prolifegen #freedomofspeech

The pro-life group disagreed, saying: "We firmly believe in being a peaceful presence on campus, where people do not feel pressured in any way and are able to approach us on their own terms".

A pro-choice group was set up as a response to the ban removal ''to protect the bodily autonomy of women and people".

The University of Birmingham Students Guild told The Independent: "The Guild recognises the right of all students to express freedom of speech within the law and will continue to be the home of discussion and debate for different views and opinions", after the pro-life group won the appeal.

Aberdeen Life Ethnics Society launched legal action against the University of Aberdeen for "unlawful discrimination" against the society when they were barred from the Students' Union. When the society reapplied, they were granted official affiliation.

However the society lodged papers at Aberdeen Sheriff Court and the university last month claiming it has been unfairly denied presence on campus and legal action was pursued again.

Demonstrators outside Parliament. We stand against forced abortion. We stand in solidarity with the woman and her family who were subject to all this turmoil. This will not happen again. #prolife #prolifegeneration #noforcedabortion #standwithher

It's not the first time ALES have faced controversy. The society came under criticism when they released a social media post that claimed abortion "replaced" the slave trade – referring de-huminisation of foetuses.

ALES have over 500 followers on their Facebook page where they do Meme Mondays: 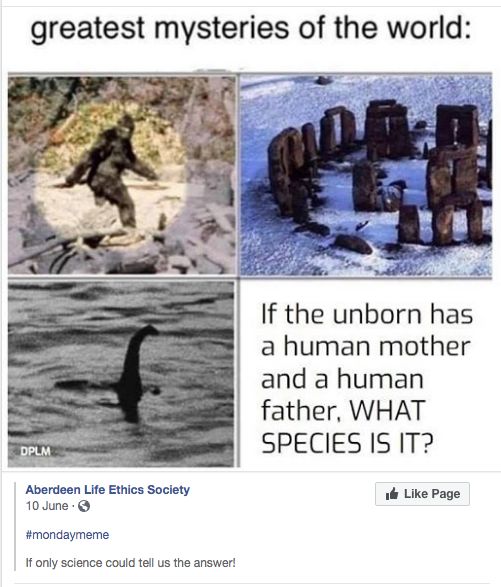 When we asked ALES if legal action was still ongoing, they responded: "Apologies, but we cannot comment on the legal action at this time.

Julia Rynkiewicz, the president of NSFL, is a second-year midwifery student. Speaking after the decision to ban the society was overturned, she said: "It's important to have both views at the university – pro-life and pro-choice. The university has pro-choice policies and there's nothing representing us when there should be […] We did not want to take legal advice so it was quite sad that we had to use the law to help us have a right to be affiliated. It was a matter of free-speech."

It’s been nearly three weeks since @marchforlifeuk and #lifefest19 We march because each unborn child in the womb is distinct, living and whole from the moment of conception. #prolife #prolifegeneration #prowoman #loveboth #proscience #prolifefeminist

In a statement the SU said: "Following an internal review relating to the affiliation of societies, gaps were found in our procedures and processes and we are taking immediate action to resolve and improve these. Following this review, Nottingham Students for Life has now been affiliated as a Students’ Union society."

The Students' Representative Council at Glasgow University ruled against the affiliation of Glasgow Students for Life in November last year.

Speaking to the Glasgow Herald, President of the SRC Lauren McDougall, said: "Given the SRC’s campaigning on a number of related social issues over the years, including support for the recent Repeal the 8th campaign in Ireland, it would be contrary to our ethos to endorse a society which calls for limited rights for women."

GSFL argued because the council were discriminating against them because of their beliefs, they were breaching the Equality Act (2010), the Higher Education Governance (Scotland) Act (2016) which says universities should protect freedoms to "present controversial or unpopular points of view", as well as their own equality and diversity policy. 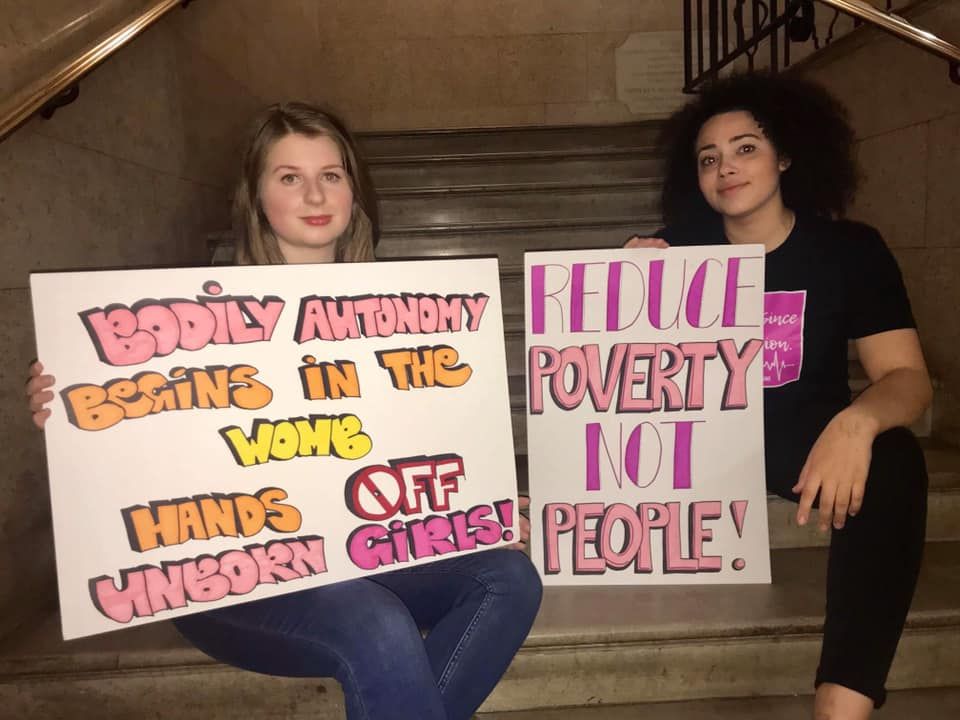 Picture via Glasgow Students for Life

After four months, the decision was overturned by the council when GSFL threatened legal action. President of GSFL, Grace Deighan, said "given that there are other pro-abortion and pro-euthanasia groups affiliated to the SRC, we believe that it is only fair for the pro-life argument to have a place".

University of Strathclyde Students' Association lifted its longstanding policy on opposing the affiliation of pro-life groups in October last year.

The policy said: "The establishment of anti-choice groups at USSA would directly contravene equal opportunities policy by giving them a platform to harass students. This in turn violates their safe space.
Allowing an anti-choice group to form would be a barrier to freedom, equality and body autonomy for those with uteruses on campus." 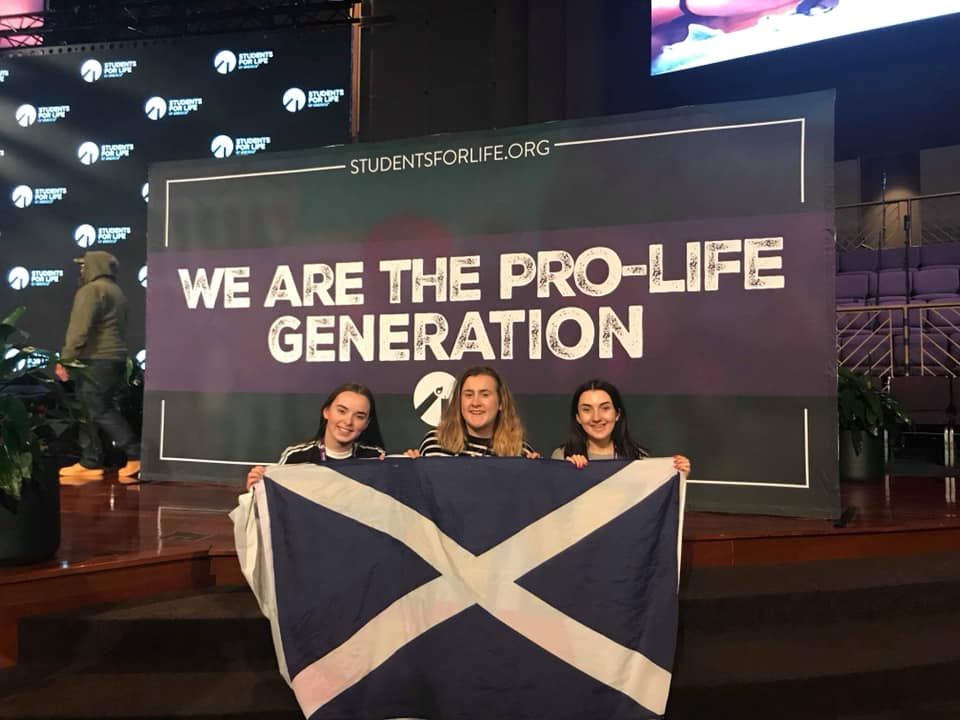 Pictures via Strathclyde Students for Life

The board of trustee’s at USSA concluded the clause was a form of direct discrimination and was therefore contrary to the equal opportunities policy of the Students' Association.

James McGowan, who acted as a legal adviser for the SSFL, said: "Ultimately, this is a victory for academic freedom. Universities are meant to be bastions of free thought and this "no platform" clause discriminated against a group of students because of their beliefs, which are protected from discrimination" after the policy was overturned.

President of SSFL, Catherine Farrelly, added: "We want to start a conversation about life ethics on campus to discuss the moral and ethical issues surrounding abortion and euthanasia. We also want to ensure women on campus know that abortion is not the only answer, and that we are here to offer support and care for women."

A spokesman for USSA said: "Strathclyde Students’ Union will continue to support access to safe abortion and support the bodily autonomy of their students and provide accurate and up to date information relating to abortions should a student seek it."

Oxford pro-lifers and pro-choicers clashes have made headlines for years. In 2018, a Students' Union meeting was disrupted by an anti-abortion protester when the SU was reviewing its pro-choice policy. The protester shouted and showed a graphic images of fetuses. 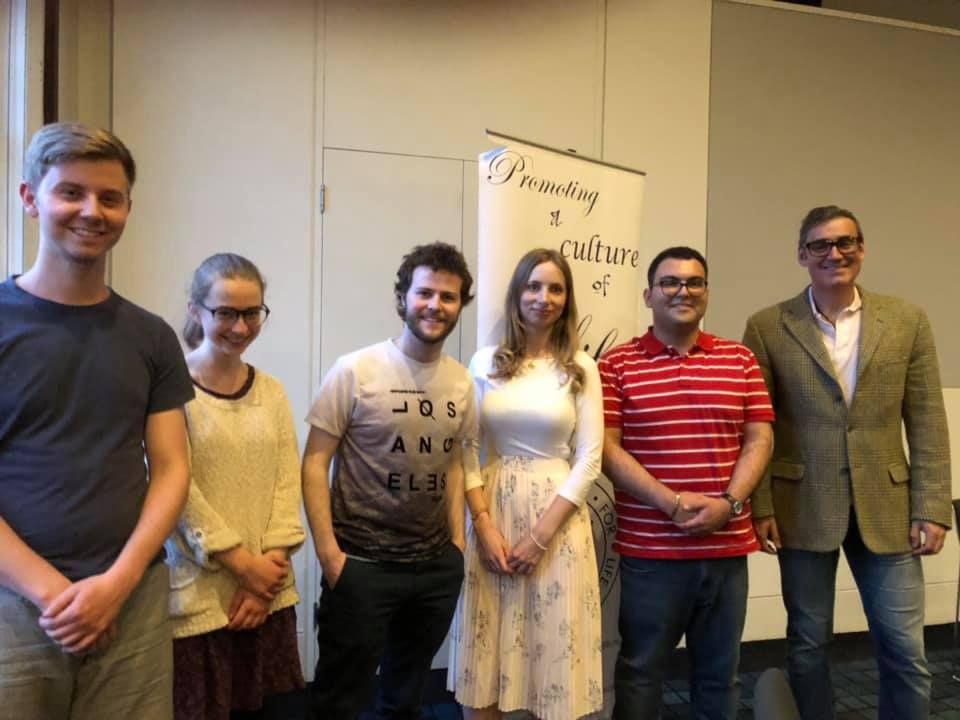 Picture via Oxford Students for Life

In 2017, the police were called to a debate on legalising abortion in Ireland at the university where Students' Union activists were jeering pro-life speakers. One speaker, Breda O'Brian, said she was shouted down "for 40 minutes."

In their about page, on their website, King's College Life Society, appears to refer to the recent banning of pro-life societies on other UK campuses: "We exist because universities are important spaces for the exploration of ideas and opinions, it is important that the pro-life voice is heard on campus. Our message is a positive one, it is not about shaming or blaming, it is about discovering the beauty of human life, and protecting it".

The society will not be continuing next academic year as the executives of the society are leaving their roles.

On their Facebook page, Bristol Pro-Life Feminist Society describe themselves as "a pro-life, pro-woman society focusing on opening conversation and fostering the pro-life feminist philosophy."

They continue: "Pro-life feminism seeks to protect the dignity of all human life from conception until natural death. We hold debates, panel discussions and socials in which we discuss issues such as euthanasia, abortion, surrogacy, capital punishment, and much more". 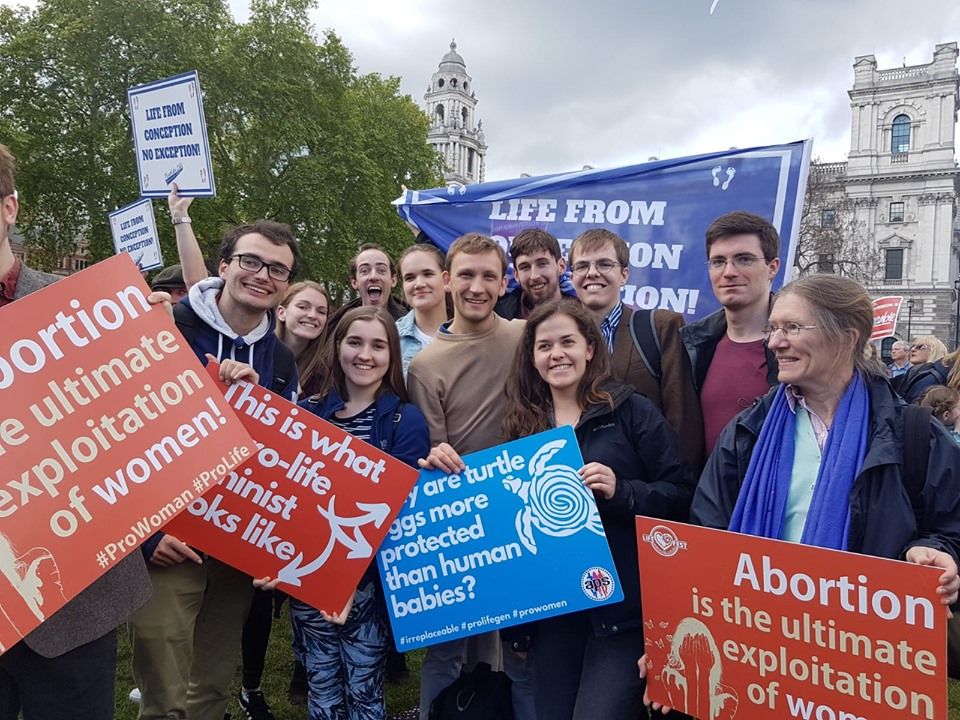 They acknowledge that some may find looking at pro-life views through feminism "surprising or even contradictory", but they "believe that pro-life feminism is not only possible, but essential to building a society in which women are equal and every human life is respected".

On their Facebook page, QUB Pro-Life Society say: "We are a group of students providing a pro-life presence at Queen's University Belfast – promoting a culture of LIFE with the Right to Life being the most fundamental and important HUMAN RIGHT of them all. We must show respect for every human person, from conception to natural death, in order to save lives."
' 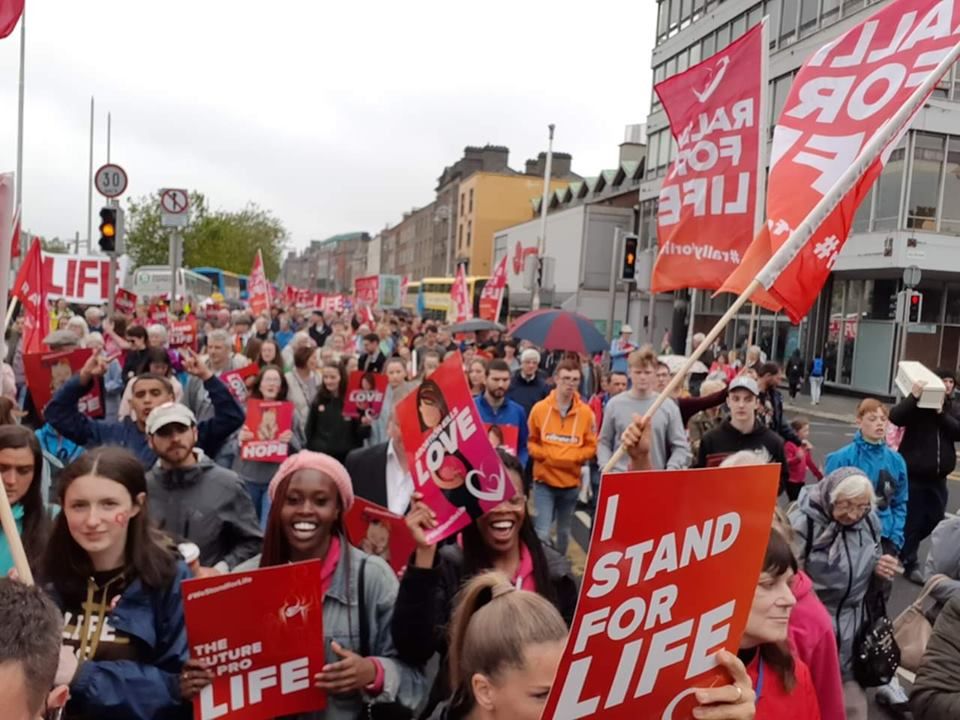 "We provide pro-life material, and educate and inform, with respect to the pro-life position, through documentary screenings, public awareness raising, social activities, networking media, literature and get togethers.

"We organise educational events which provide a fun, safe and social environment in which to discuss pro-life issues like discussion lunches, lectures, debates and information evenings."

On a video on their Facebook page, members of the group say (into a camera that could have done with a tripod), "Often people assume that behind our emphasis on care and concern that we have some sort of hidden agenda, that we're aggressive and oppressive […] I joined because their are many vulnerable societies in need of our protection". 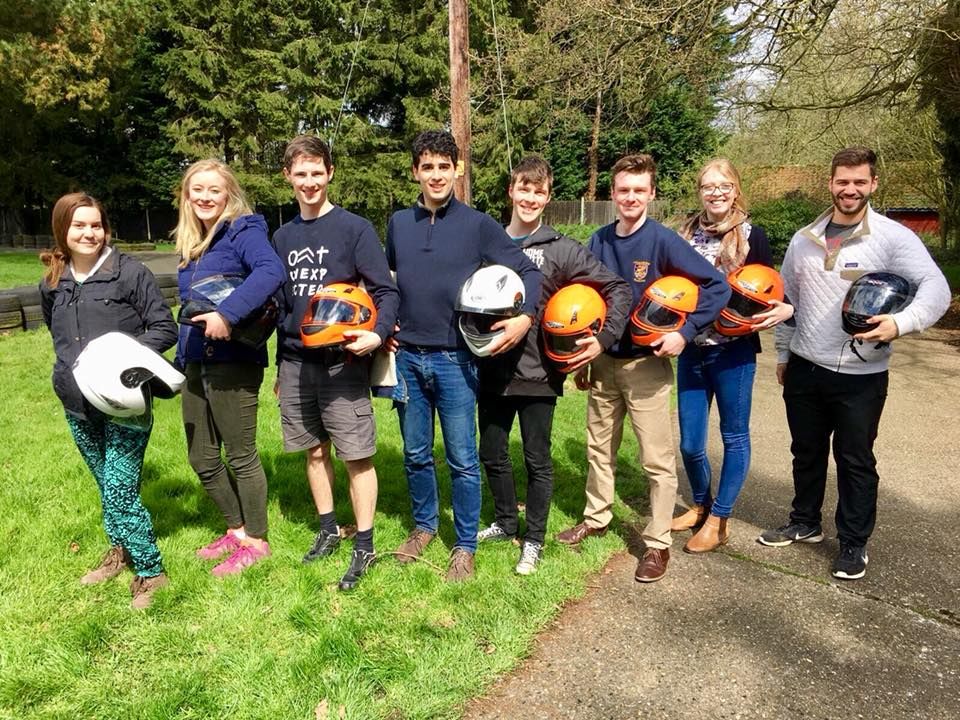 Picture via Cambridge Students for Life

In their description, they explain that they are non-sectarian: "We realise that a lot of people who are pro-life in the UK are so because of their Christian faith, but we welcome people of all faiths and none to join us as we seek to change the hearts and minds of students in Cambridge on this important issue".

On their Facebook page, Durham Students for Life describe their mission as: "We exist to create a culture of life for both born and pre-born people in Durham University through discussion and providing a space to explore life ethics." 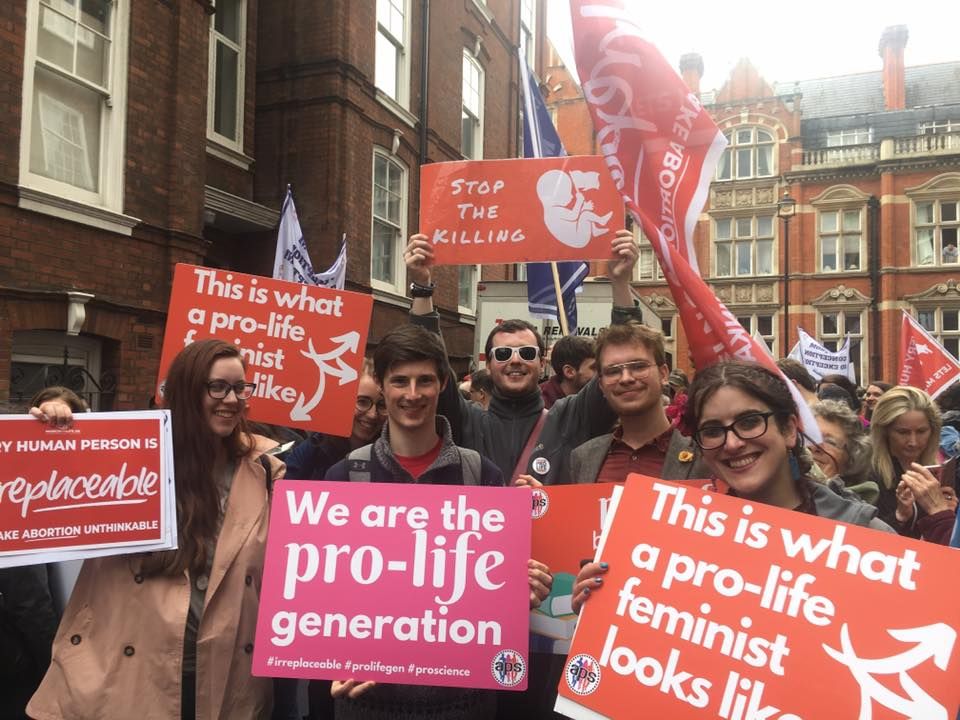 Picture via Durham Students for Life

"Our message is a positive one, it is not about shaming or blaming, it is about discovering the beauty of human life and protecting it." 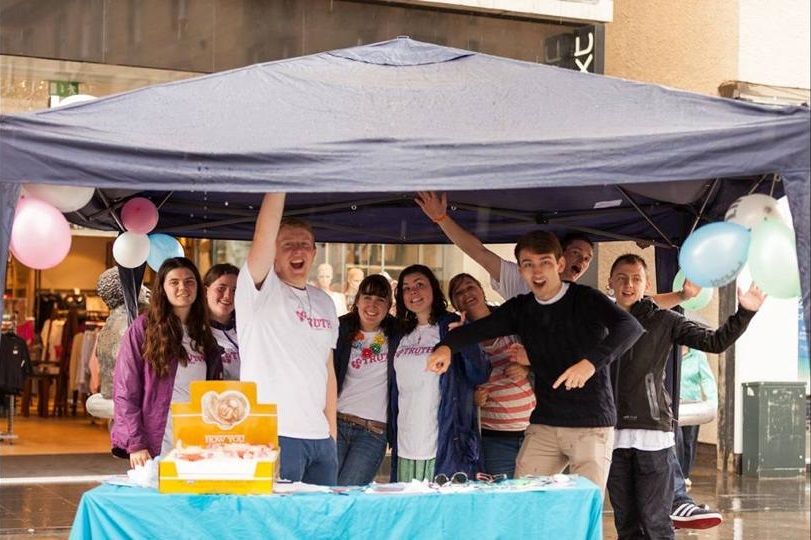 The group say: "The Life Society exists to organise talks, debates, and discussions that support respect for human life from conception to natural death."

Some of St. Andrew's for Life's most recent talks have been titled, "Women's Rights and the Pro-Life movement" and "Is Authentic Feminism Pro-Life?" 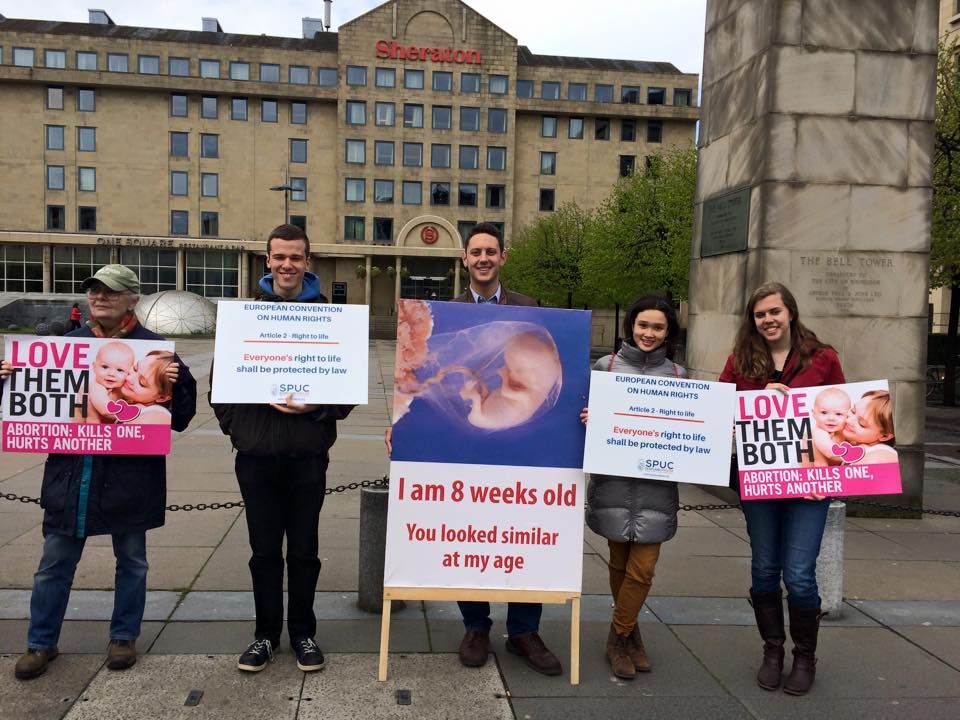 Picture via St Andrews for Life

The group aims to "promote a culture of life in St Andrews. Protecting and celebrating the dignity of life, from conception until natural end."