They say both ‘relied on dehumanisation to justify their actions’

The picture shows a black man, as well as text that reads: "The slave trade relied on dehumanisation to justify their actions, the abortion industry has simply replaced it."

The post claims abortion "dehumanises the weak and vulnerable", calling it a "debasement of human value". It also says: "Abortion may currently enjoy protection by the legal system, but the same can be said of a great many other immoral practices over the last few hundred years." 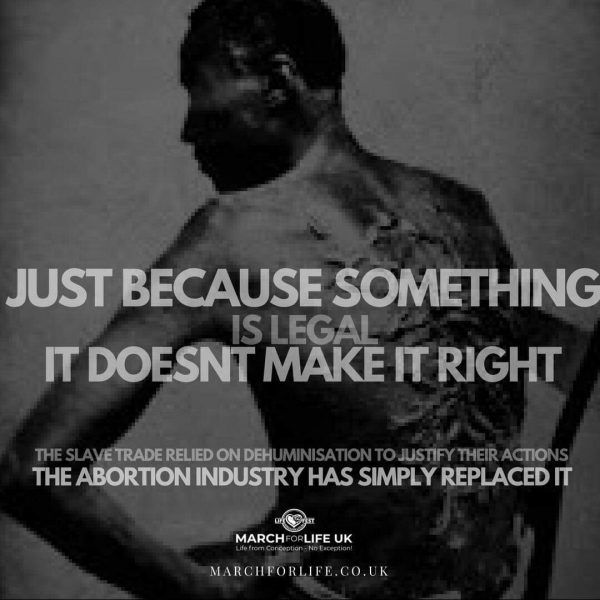 The photo, which was posted on the 8th May, also displays the logo for pro-life movement March for Life UK, as well as group's website address. March for Life UK confirmed it was a meme taken from their page and were "happy to acknowledge ownership of it."

Aberdeen Life Ethics Society is not officially affiliated with Aberdeen University and has previously attempted to sue the uni for discrimination after it refused to grant them funding. At the time, a spokesperson for the society said: "It serves as proof that student democracy at Aberdeen is broken."

The legal action is still ongoing. According to The Press and Journal, it is expected to resolve in September.

An Aberdeen University Students' Association (AUSA) representative said the group had been invited to reapply, "with the reassurance that the application would be treated in the same way as any other", but that ALES had not done so. They were unable to comment on legal action.

The group's Facebook cover photo references the University's refusal to grant them affiliate status, and reads: "The future of free speech at Aberdeen hangs in the balance. AUSA's discriminatory no-platform policy must be rescinded."

A spokesman for the University said the uni itself does not oppose the groups membership in the union, since that decision lies with AUSA. They said: "The university is an inclusive community and recognises different beliefs, values and cultures.

Aberdeen Life Ethics Society has been contacted for comment.