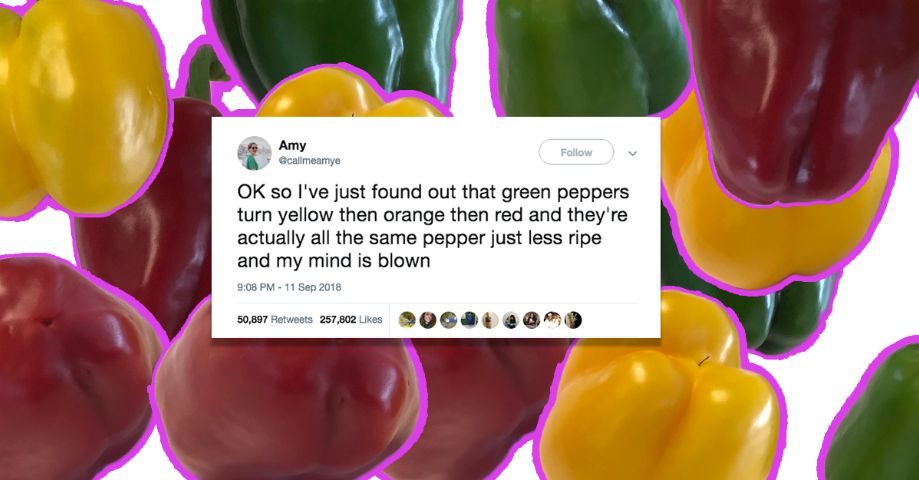 Are red and yellow and green peppers actually the same? We debunk your favourite capsicum myths

It was too good to be true, sorry

Listen up, by now you've heard all kinds of nonsense about peppers. Are all peppers the same? This viral tweet in particular is convincing people that all the different colours of pepper are just one pepper of varying ripeness:

Huge if true. 52.1k people are talking about it. Your mate is definitely trying to convince you it's true, and blow your tiny mind. It's just all bollocks.

Are red, yellow, and orange peppers actually just the same?

Peppers do change colours. But red and green and yellow peppers are not all just the same.

Science does tell us the myth is partly true. Enter the absolute bell pepper boys, Moser and Matile. In their 1996 paper "Chlorophyll breakdown in ripening fruits of Capsicum annuum", they tested some peppers "obtained from local dealers".

If you remember GCSE science, chloroplasts are the little things which make plants green. Moser and Matile explain that the transition from green to red takes place as the pepper ripens and chloroplast changes to chromoplast, which is red or yellow.

But here's the myth: that a pepper goes, like traffic lights, through being green, yellow, then orange, all the way to red as it fully ripens. Yellow peppers are just not ripe.

In fact, a green pepper can turn yellow or red, but orange peppers don't turn red.

The amount of pigment a pepper can produce is predetermined by its DNA. More pigments, not more time, creates a darker pepper. Yellow, orange, and red peppers are actually different varieties.

Although it *is* true that green peppers are just unripe regular ones, yellow, orange and red peppers are all genetically different varieties at full maturity.

Their DNA predetermines the maximum amount of pigments they can produce, which creates this variation in colour. pic.twitter.com/g6zGi2YRgP

Can you tell a male pepper from a female pepper by looking at their bumps?

A bunch of weird pepper perverts reckon if you flip a pepper onto its back and take a look at the bumps down below then you'll know if it's a girl pepper or a boy pepper.

Four bumps for male, three for female. Just look at this meme. 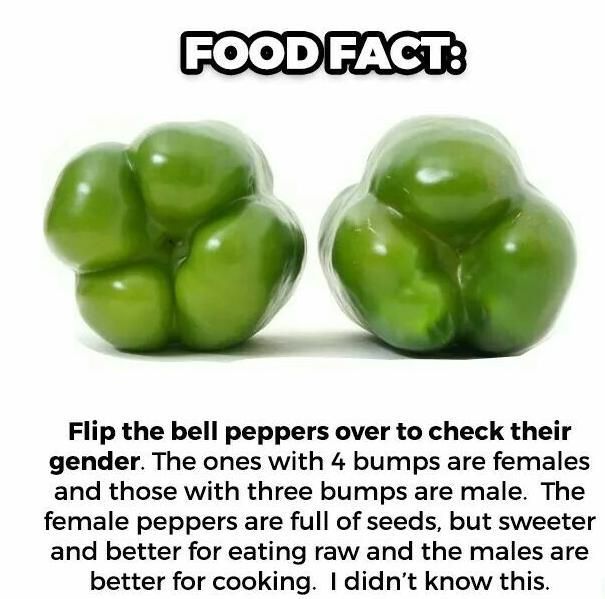 This is weird. One: stop trying to force your outdated gender roles on a literal fruit.

Despite them being the thiccest item of any salad (sorry croutons), science says peppers do not fuck.

It's not the peppers that reproduce with each other. The plants they grow on do that.

Here's a science man also debunking this. David Karp, a Pomologist (fruit studier) at California's UC Riverside, told KRCW: "The supposition that there are male and female peppers is a common canard, but untrue. Peppers grow from flowers that have both male and female parts. The fruits do not have a gender."

• Waitrose have made a ‘student essentials’ list, and I can confirm none of them are essential (featuring no peppers)