Love Island Gossip Column: Proof the lie detector is FIXED and pics of Laura that are unrecognisable

People are convinced they've found proof the lie detector is "fixed", because it went off before Wes even sat down

In last night's very explosive episode, the boys endured the lie detector test. But in one instance, the buzzer went off before Wes even sat down and now people are convinced this is yet another Love Island "fix."

The cowboy boots and yellow dress combo is iconic.

Here’s a pic of Laura , 2003ish, she really loved her dancing comps, she hated coming second, think she’s join to kill me for this ?, a don’t care, am so proud of her, thanks again to everyone for their support. ???

Her dad also shared a picture of her with blonde her, captioning it: "A young Laura, she still has the same smile." Ok, but why does her face looks entirely different?!

A young Laura , she still has the same smile ?

The Pomeranian called Pumpkin, which Megan got two years ago, had to be put to sleep after her stomach cancer haemorrhaged.

A source told The Sun Online: "Megan will be devastated when she comes out and hears the news about her little Pumpkin. She bought her from a Pomeranian breeder when she was just eight-weeks-old. One week after she entered the villa, Pumpkin was taken to the vet where Megan's family was told the pooch had suspected stomach cancer which then haemorrhaged. Pumpkin was Megan’s little baby and no doubt it will be a huge blow for her to find out what has happened."

Everyone was hopeful when we reported that Danny Dyer was spotted in the airport. Though sadly he's not in Majorca, because he's been spotted taking photos with fans in Disneyland Orlando instead. 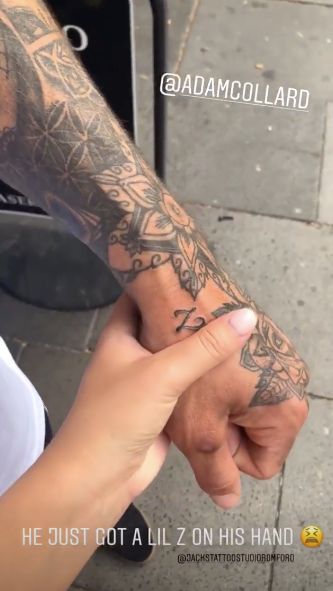 An insider, who works with Dr Alex at Lewisham Hospital, told The Tab: "There honestly isn't anything negative I could say about the guy. Genuinely, everyone loves him – especially old ladies because he's nice to everyone."

Darylle from Casa Amor is dating none other than Jake Quickenden

Remember that girl Darylle from Casa Amor? Well, she's dating Jake Quickenden, who is an ex-X Factor star turned stripper. The one from I'm A Celeb? Dancing on Ice? Anyone???

Great little photoshoot for @dreamboys back with the boys tonight in Skegness… Grimsby tomorrow and Leicester on Sauturday!! Book tickets here > https://www.dreamboystour.co.uk

In what is possibly the most z-list coupling there ever was, they were seen kissing in a Leeds kebab shop, after meeting at one of his Dreamboys stripping events in London. Aw, young love.

Clearly the girls still think they're on Love Island because they were seen wearing bikinis the entire day and yes, that includes on rides. Iconic.

Zara has been hitting out at trolls for saying her Instagram pictures are edited ?

People have been saying that Zara uses photoshop to make her boobs look bigger in some Instagram pictures, but she's hit back at her trolls, explaining that she has a "medical condition" which means she can't wear bras all the time.

I am missing the sunshine ?? BUT I am really excited for the Love Island final! P.s. Don’t forget this weekend is your last chance to bag yourself a pair of live final tickets & a Jet2holiday to Majorca by entering @jet2pics competition! Simply head to the Jet2holidays website for details @loveisland #Jet2holidays #loveisland

She said: " I can assure you this isn't photoshopped at all. As I have said before and I will say again, my boobs are completely natural and I absolutely love them, although it can be annoying sometimes when in some outfits they look big and some they look small. I can't really wear a bra most of the time due to a medical reason, so hence why it depends on what outfit I'm wearing that the size can seem to fluctuate. Anyway, it's frustrating having to keep explaining myself to trolls online. I am confident in my body and I don't need body shamers on my page! It's all love! It's constant comments like these that drive girls to getting plastic surgery when everyone is perfect the way they are, and it's really sad."

Surprisingly, it's nothing to do with microphones. According to Zara, the islanders don't go in the hot tub because there are just too many wasps and the water is too hot.

They went for dinner in Mayfair and Hayley shared a picture of her Moet champagne, while Tom filmed the drinks being poured. C o o l.

The pair later went to a rooftop bar and Hayley hovered around him and his friends. Then the rest of the Love Island rejects joined them in a nightclub.