No, honestly it was really rough

So you went to a state school in some market town full of old people. It wasn't so rough it had a metal detector to check for knives on the way in but you weren't exactly reciting Latin and doing rowing at after school club.

In fact it was pretty fine, just fucking bland. The majority of your lessons were spent texting your mate "WUU2?" under the desk even though you could see them at the other side of the classroom. And a good day was one where you got away with an untucked shirt. To give you a dose of sticky-sweet nostalgia, here is a list of every single crappy thing that happened in your predictably average state school.

You would alter your uniform as much as humanly possible

Every girl would roll their skirt up until bum cheeks were visible or you'd try get away with wearing Topshop trousers rather than the shapeless ones from the uniform shop. We would wear so much makeup it stained the collar of our white M&S school shirts and every time we hugged someone we left behind a blur of Dream Matte Mousse. Guys would hold trousers under their arse cheeks with novelty Superman belts. And everyone would have a three inch tie, even though it looked really, really shit. 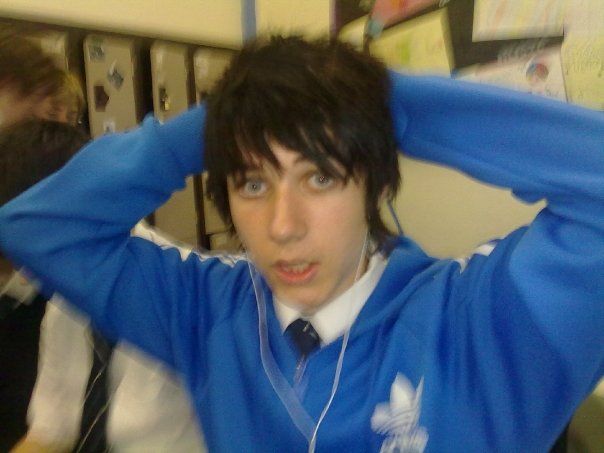 How has this lucky bastard got away with wearing a hoodie in class?

But then you realised your mum had to sign your planner every week meaning she'd realise you never actually did your homework. So you'd get your mate with the neat handwriting to sign your mums name. After a few goes tracing her signature they'd nail it.

As for your locker, the only time you used it is when you left a tuna melt panini in there for the whole of year 9. When you eventually removed it on the last day of school it was blue and fuzzy.

@order.out.of.chaos has a really great product here. I cant wait to help keep my son's academic school year organized. However this particular planner will help me keep my blogging, and other work organized. I can easily plan my day out. #planner #schoolplanner #organized #orderoutofchaos #schoolplanning #organizer #gettingorganized #planneraddict Full Review will be on the #blog soon. #linkinbio

You'd puff until you were smoking the filter, aware that this was perhaps the most expensive thing your sweaty teenage hands had touched all year. 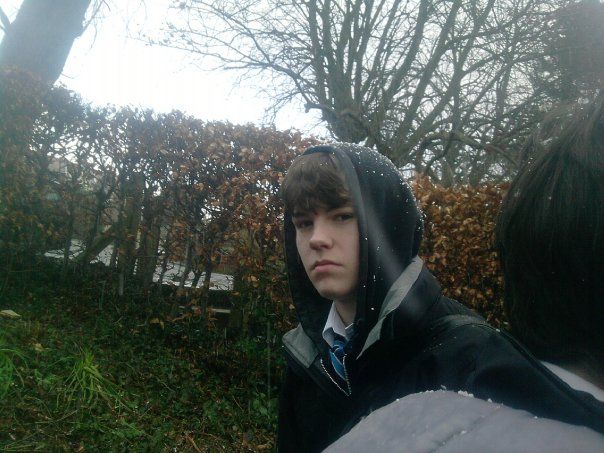 They actually had the cheek to peck at your Walkers cheese and onion crisps.

Rumours spread that if they took more than 15 minutes you could go home. Bins would be flying everywhere, some nerd who tried to warn the deputy head would be given a dead arm. People took turns sitting on the teachers spinny chair and someone even dared to write in the desktop username slot, "hey, fuck off".

Writing on things was a competitive sport

You'd get mad ratings if you were good at bubble writing, all the school tables were graffitied with inflated cartoon penis' with massive balls, that weird angular 'S' shape and messages like "Vicky and Annie BFFL's 4 lyf, ROFLCOPTER, Danny haz small ballz". 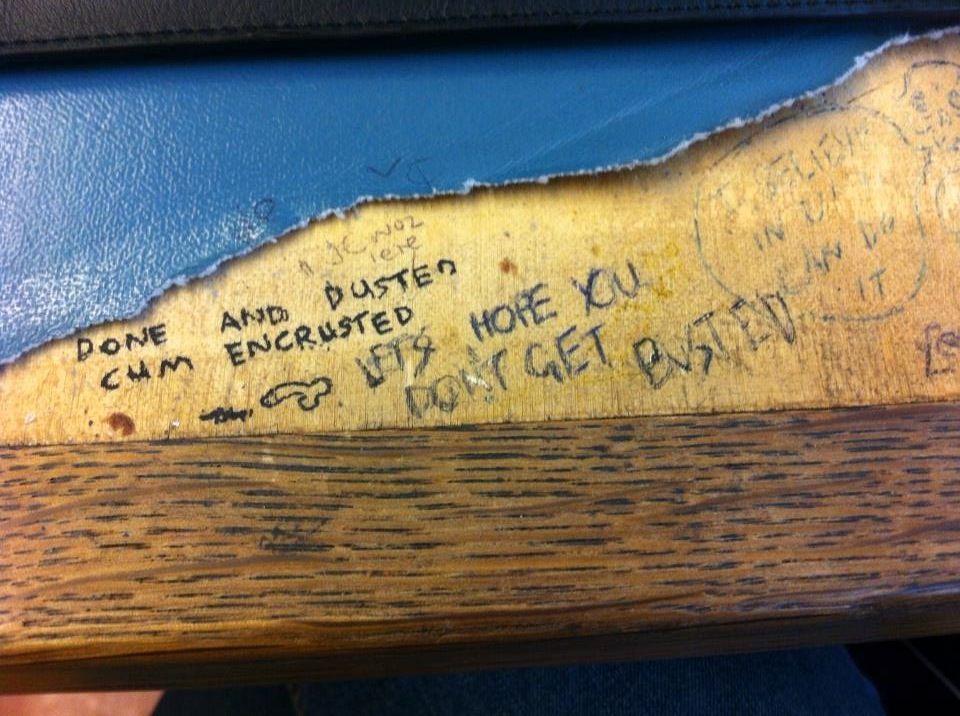 Which is weird because German lessons involved sharing one battered up OCR textbook between three people and copying out of it until you were so bored it felt like your brain was melting into a pulp.

You got to school just after they had banned unhealthy food

Fuck you Jamie Oliver. After you got rid of potato smiley faces and turkey twislers, the only thing we had to look forward to were soggy carrots and dried out beef that tasted of cardboard. Getting defrosted ham and pineapple pizza on the occasional Friday was a big moment.

Chewing gum was the edible equivalent of crack cocaine

It was sold on the high school black market. You'd pass it through closed, moistened palms so no one could see you exchanging the contraband. Either because teachers would confiscate it or ten kids would crowd like wasps begging for a hit. Trident Tropical Fruit revolutionised the chuddy game, it was top quality gear, but you'd take literally anything, even Extra Summer Fruits. You just needed that sweet hit. 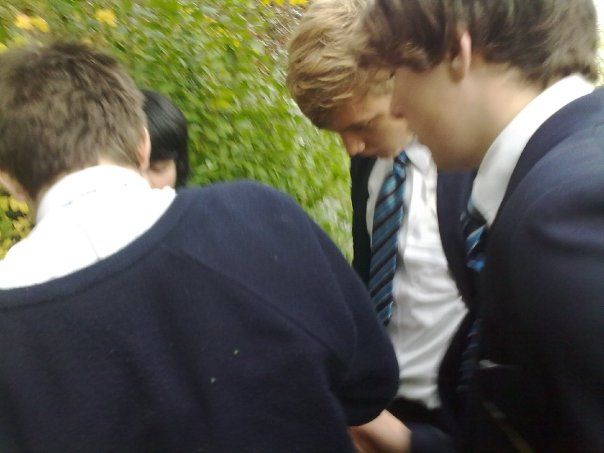 Can I have a twenty bag m8? Yeah Wrigley's Spearmint

Then you'd stick the gum under school desks, it was literally everywhere

Well done to all those who contributed to PSC's under-the-desk chewing gum collection: pic.twitter.com/tAeEsna8aK

P.E teachers were so savage they would have excelled as leaders of totalitarian work camps

You'd literally breathe too loudly and Miss Temple would have you on the floor doing press ups until your elbows seized up. The P.E department were so infatuated with physically fit pupils they were one step away from advocating eugenics. If you couldn't vault over a 10ft block of wood you were filth and your mum never loved you.

In class changeovers you'd love it when the corridor got blocked

"Stop pushing – someone's pushing me" you'd cry, whilst also shoving the year 7s in front of you as hard as possible.

The entirety of these lessons would be spent pressing automated songs on the key board, asking intentionally stupid questions like "if I farted would that be art Sir?" and throwing bits of flaked off rubbers at those lower down the social hierarchy than you. 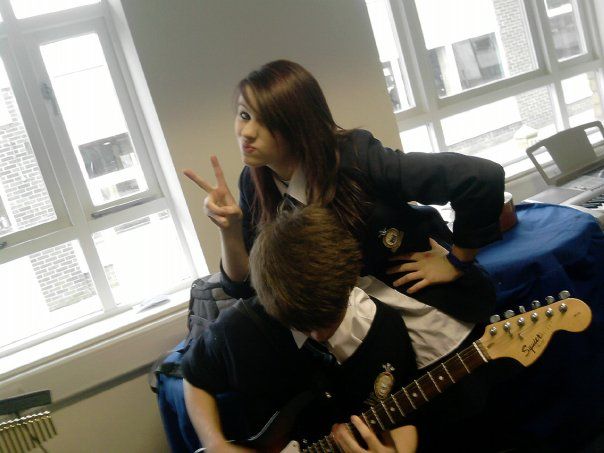 When they lost control of the class, teachers would attempt reverse psychology

It would always fail spectacularly: "So you guys want to laugh? Alright then, go on, keep laughing, I'll just sit here. I don't care – it's not me sitting my GCSE exams in two weeks."

Everyone continues to scream, one kid tries to get attention by setting their hand on fire with a bunsen burner, another throws a chair across the classroom. 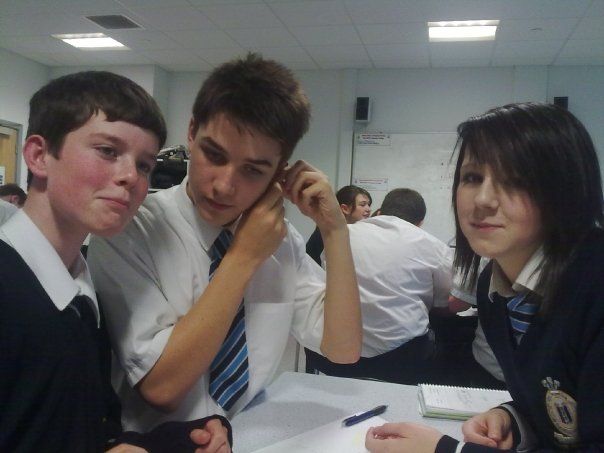 Peanutting, old schooling, pile ons, that weird thing where you would punch someone in the chest and apparently they died for 10 minutes.

Or you could enjoy that game where guys measured how fridged you were by seeing how far they could put their hands up your skirt. Very problematic in retrospect. 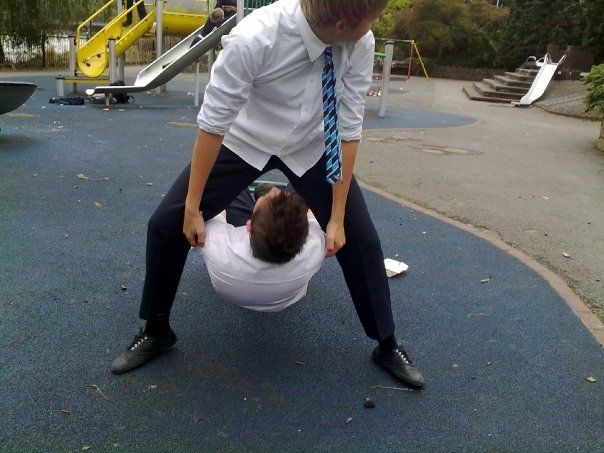 Some wholesome teabagging in the local park

You had one of three options for your school bag

It was either a Gola, a Jane Norman, or a drawstring Nike bag from JD Sports. 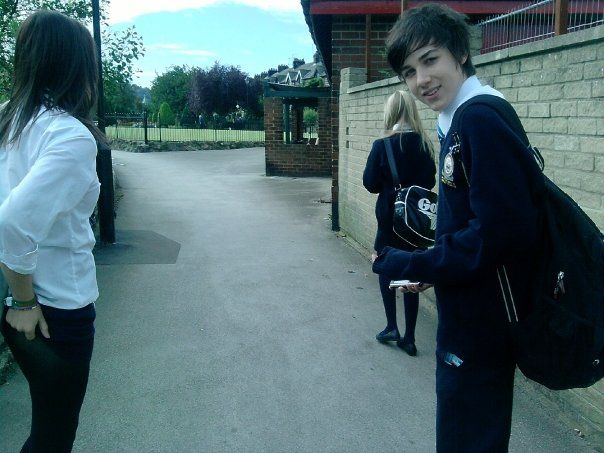 But the plastic bag you chose to put your P.E kit indicated what lay within your soul

Ideally you wanted to be in the preppy upper echelons of high street shops: the Abercrombie and Fitches and the Hollisters. You would go to the extreme of buying the cheapest thing in the shop, a key ring or a pair of boxer briefs just to prove you owned one of their products. The Tesco Bag for Life mum gave you was a last resort. 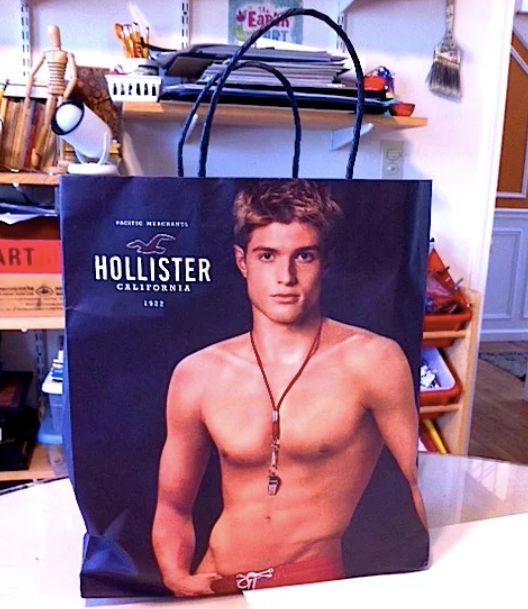 Non-uniform days were the Oscars of the educational year

One idiot would forget, but at least they could take their tie off for the day. 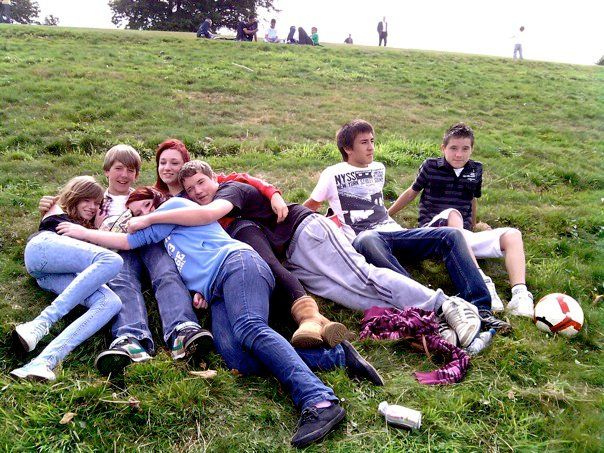 You couldn't wait to don the UGGS on non-uniform day

They would bluetooth Dubstep tracks to each others Sony Ericsson. If you asked what song was coming out their tinny speakers they wouldn't tell you. As though a teenager from Salford with over plucked eyebrows owned exclusive listening rights to Chase and Status. 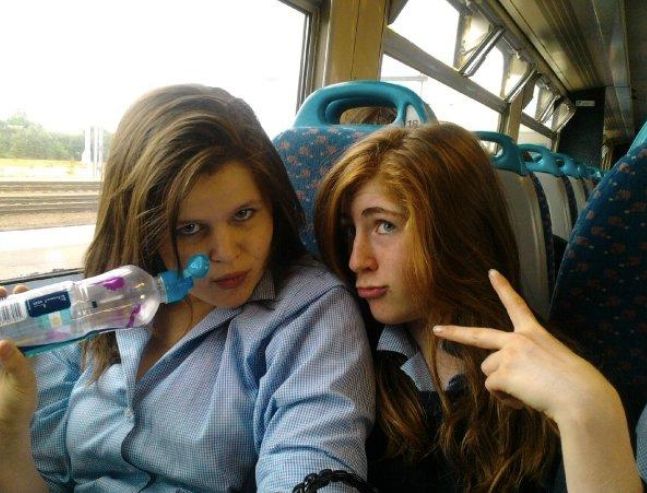 Everyone stank of LYNX Africa, Impulse or Charlie, so much that we'd all leave a bitter chemical taste in our wake

But why did we spray so much of it?

Because sitting in solitary confinement with nothing but a textbook and a couple of work sheets on WW1 propaganda is obvi going to make you engage with learning. The teachers would begin the session with, "sit there and think about what you have done." 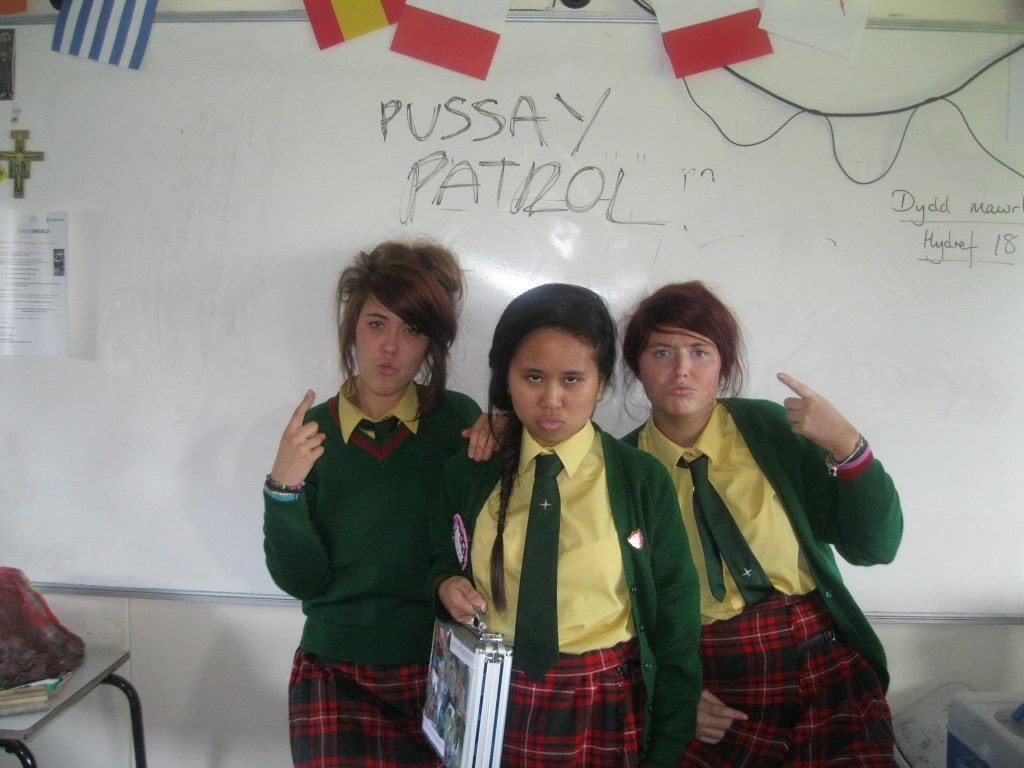 Someone would scream "FIGHT, FIGHT, FIGHT" and you'd all sprint to the year 9 football field

Every now and again an umpire would tear the students apart, those playing the role of coach would squirt water from Evian bottles into their gums and a pixilated video would circulate for years to come. But really both challengers were so weak there was more chance of an asthma attack than grievous bodily harm. 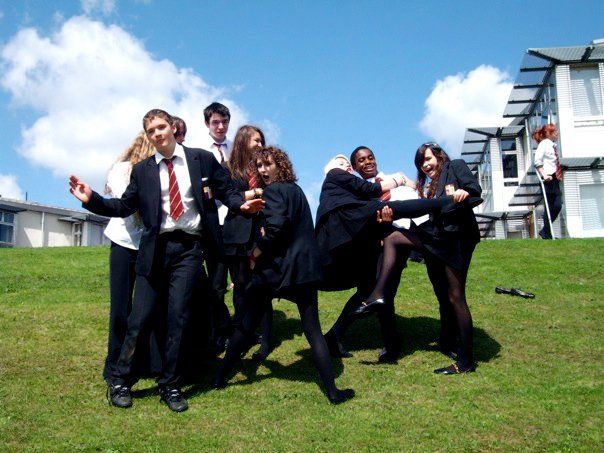 But most of the time nothing actually kicked off

Just some lanky prick yelling "come on then" at a kid giving him the finger. It would be over a mistaken "ya mum" joke.

That's what people did before pints where a thing. You'd eat chips and scraps, Apple Tizer, 10p fizzy sweets and other food your mum would never let you have at home.

It was waay better than the "Dinner Formals" private school kids went to. 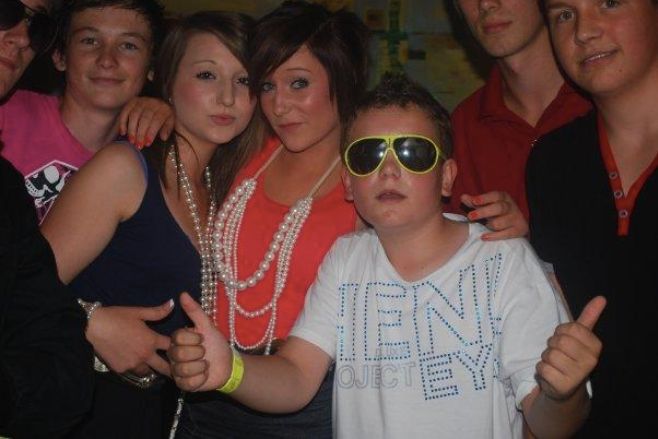 You had a vicious rivalry with the neighbouring private school

When you were in big groups you'd yell "bus wanker" at them. But if you saw walked past them alone, you'd be shit scared, hiding your face behind your massive side fringe.

The teachers said it was "temporary" which is funny because this shack structure made for building sites was there for the whole of your school life.

The fun of the Geography trip would be ruined by this arbitrary sheet of paper you were made to fill out. That said useless things like "what three things have you learnt about rock formations today?" Written with the sole intent of shitting over all the fun of running around hills and telling the activity leader that your name was Rachel when it's actually Sarah.

If you went abroad the only words you'd say in a different language would be "chips please" and "Hi, do you speak English?" 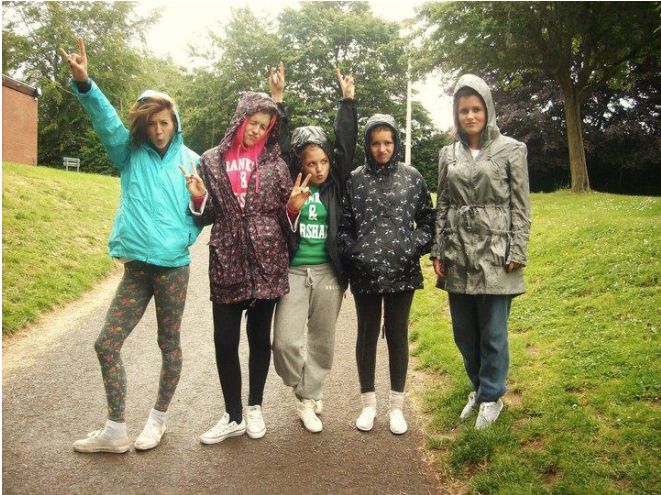 It would always rain

You had a DT teacher who literally hated children

They had lost the will to live after teaching how to make the same bottle opener for ten years. Other characters included an overweight dinner lady with boobs the size of two yoga exercise balls and a weird Maths teacher who ended up dating a sixth former weeks after she finishes school. He always did tell you off when you weren't wearing a neutral coloured bra.

The videos would have a weird Christian slant to them, where women would "give away their flower". Essentially the message was, unless you have been with your boyfriend for four years, you will literally get pregnant and die.

The infamous condom on banana thing turns out to be a lot more boring than you imagined. The teacher would either take the angle of, "it's not funny this is biology" or "it is funny guys! Sex is funny" let's all laugh, I'm soo chill.

Then you have a long assembly where a slide show of the years best moments were shown. You don't make the cut, it's mostly just the Netball team and people who took drama GCSE but the use of The Wanted's Glad you Came makes your arm hair stand on end. 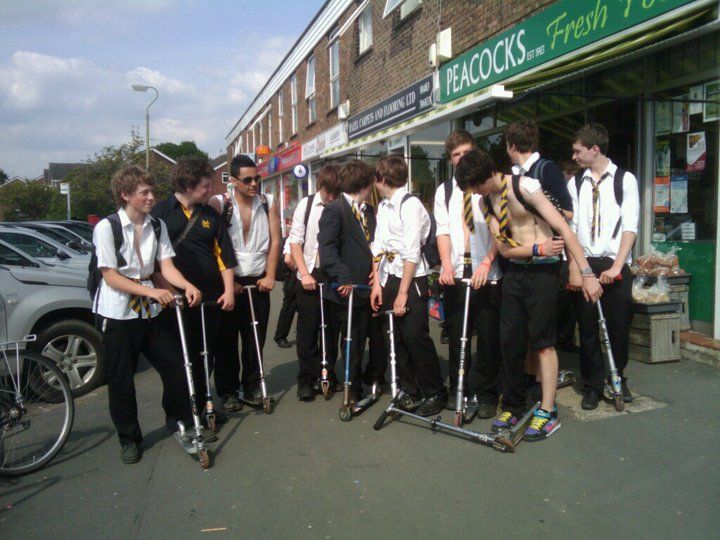 During freshers' week you exaggerate how rough it actually was

"Yeah like honestly, half the school was illiterate". When really your parents moved into the catchment area so you could secure a place there because it got so many people into Oxbridge. (But now you are woke and totally acknowledge your privilege).