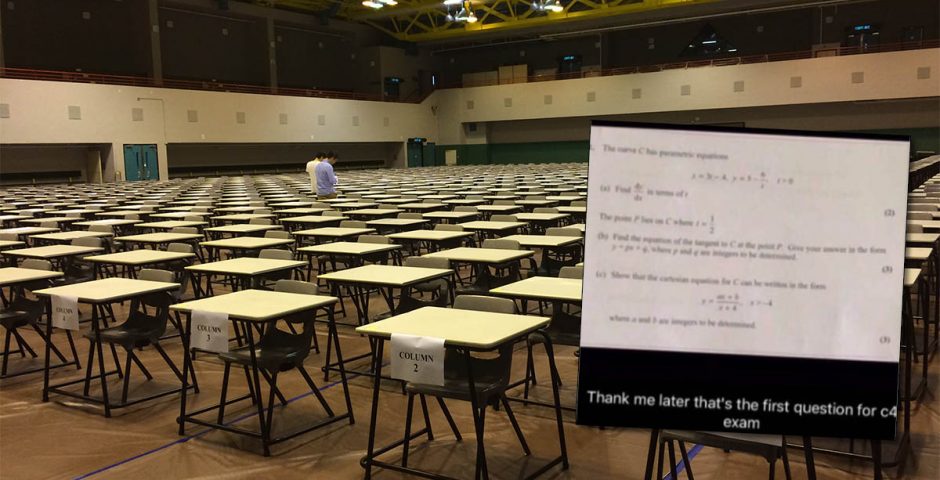 Ironically the question was about a leaking cylinder

Taking A-levels is tragic enough. But getting arrested for leaking A-level exam papers online? A scenario so tragic you  thought it would never happen. It just did.

A-level students felt brutalised this week as reports went around that their Edexcel C4 maths and Economics 3 papers had been leaked online, with some claiming that entire papers were for sale.

To make matters worse, one of the leaked questions was about none other than a tank of water – with a leaky hole.

Pearson, the company that owns Edexcel, said it was aware of the leaks before the exams were sat, but decided it wasn’t serious enough to make widespread changes – instead offering different questions for one or two schools.

Rod Bristow, chief executive, said: “If we had had any reason to believe that there had been a widespread breach of the maths papers, we would have postponed this week’s sittings without hesitation.”

Mr. Bristow said: “The police rapidly made arrests, but their detailed investigation takes time, and we had to make a decision about how to approach the exams that students still had to sit”.

Pearson sent a letter to schools, apologising with “profound regret”.

Mary Bousted, General Secretary of the Association of Teachers and Lecturers, said: “This summer’s exams have been plagued with questions leaking, unanswerable questions and essential information missing from exam papers.

“Students, parents and teachers are likely to be distressed by these failings and lose confidence in the exam system.”

Last year, an 18-year-old was threatened with disqualification from her A-levels after AQA determined her ‘guilty by association’ for being in a Whatsapp group where exam topics were leaked.

She told The Tab: “The person who posted the questions into the group chat had a friend who had an exam clash, so the pupil with the exam clash left the hall during the exam to tell her friends on a Facebook group using her phone”.

This year’s C4 maths exam was sat by 50,000 A-level students last Friday, while 10,000 took Economics 3 on Monday. The two men have been released on bail. The investigation continues.