He says they were taken out of context

A candidate for a top NUS Executive position has defended himself after he tweeted the hashtags #heilhitler and #fuckslutskilljews.

Seán O’Neill says his tweets have been taken out of context after they emerged yesterday. The Independent were sent tweets from October 2012 which led the Union of Jewish Students to call for him to step down from the election. 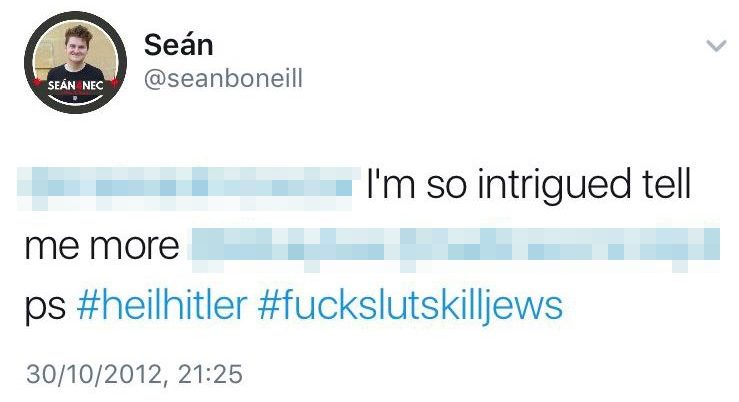 Seán is running for the block of 15, a main decision making body within the organisation.

Current President Malia Bouattia was also called on to step down, after a screenshot from Facebook showed she was involved in a play called Seven Jewish Children during her time at university in Birmingham.

While Malia said at the time she was directing it, The Independent said she now claims she merely helped to promote it and was not its co-director. Blanche Pope, a friend of Malia and the actual director of the play, told The Tab: “I directed Seven Jewish Children not Malia. She was in Friends of Palestine at the time and helped along with other members with promoting etc.”

The play has been described as “deeply antisemitic” in the past and was also controversially put on at York last year.

The Tab’s story on Ali Milani’s tweet where he called someone a Jew for being stingy also led to calls for him to quit the race.

Josh Nagli, Campaigns Director for the UJS, said: “I’m appalled by these absolutely disgraceful comments, all of which are extremely offensive to Jewish students.

“The regularity of antisemitic comments being made by candidates is exceptionally worrisome and shows complete disregard for the welfare of Jewish students, as well as for the anti-racist, anti-fascist values that NUS and many of these individuals claim to uphold – particularly when those comments invoke the memory of the Holocaust.”

Defending the tweets in a Facebook status, Seán said: “Today, 24 April 2017, The Independent have published an article, ‘National Union of Students in new antisemitism row after series of offensive tweets’, featuring claims of historic antisemitism from those now involved in NUS. Within this article, a tweet published on my personal account in October 2012 is used out of content as evidence in support of the piece. The tweet includes vile slurs and slogans which have been quoted out of their wider context. I was quoting a series of abominable comments made by a group of strangers the night before – my friends and I were, in the attached thread, ridiculing them.

“I would like to make it extremely clear that they are not my words, and the tweet was not made as an ‘attempt at humour’ – they were quotes, and I was referring to them not in jest or in agreement, but in disagreement and bewilderment at the incident. Then and now, these words are wrong. They are antisemitic and misogynistic, and I can only imagine how difficult these words are to hear for the affected groups.

“The inclusion of this tweet in the article, despite having been taken well out of context, does provide a reflection on how so many of us, especially as teenagers, do not understand the power that language holds – to be taken out of context, and to hurt. I wish to emphasise that the way this has been reported is incongruous with my deeply-held beliefs against sexism and antisemitism, themes I continually express online and in my broader life, 2012 through to now.

“I hope this clarifies how I could ever be seen tweeting such words, words I never agreed with or found funny, and never will. I welcome anyone, especially individuals from the relevant groups, to discuss their concerns personally.”

The NUS told The Tab: “Under Malia’s presidency NUS has ran a series of roundtables on tackling hate crime including specific events on antisemitism and islamophobia, campaigned for students’ unions to be hate crime reporting centres. We have also published research about the experiences of Jewish students, setting out a series of bold and recommendations for the student movement.”