A candidate for Vice President of the NUS has apologised for a series of tweets that have been described as “deeply antisemitic”.

In one, he replies to someone saying: “Nah u won’t mate. It’ll cost you a pound #jew.” His remarks have been described as “deeply offensive” by Jewish students.

Ali Milani, the current President of the Union of Brunel Students, has said that the tweets “do not reflect how I see the world today”.

The tweets, published in 2012 and 2013, show Ali arguing about Israel’s right to exist, calling Piers Morgan a zionist and stereotyping Jews as stingy. This comes a week after an NUS report found a quarter of Jewish students have faced antisemitic abuse at university. Two thirds of respondents said the NUS wasn’t doing enough to tackle the issue.

Speaking to The Tab, Milani said: “I have apologised unreservedly for these comments before and I do so again. They do not reflect how I see the world today. These tweets are from an incredibly long time ago – when I was 16 to 17 years old. It’s unacceptable, I know that now. Education taught me that.”

Josh Nagli of the Union of Jewish Students told The Tab: “These tweets are likely to further entrench those opinions and provide further evidence of a culture in the student movement that wilfully tolerates antisemitism.

“It is very worrying that someone seeking to be an NUS Vice President has previously expressed views that many Jewish students will find deeply antisemitic.

“The use of tropes that denote Jews as cheap or stingy is extremely offensive and, as made clear by various reports into antisemitism in the last year, it is completely unacceptable to use the word ‘Zionist’ as a term of abuse. It is disgraceful that this is now a common theme in the student movement.”

These tweets, from 2012 and 2013, show Milani asserting that Israel is a land built on ethnic cleansing, he also appears to show a desire to self-destruct the country if he were in charge. 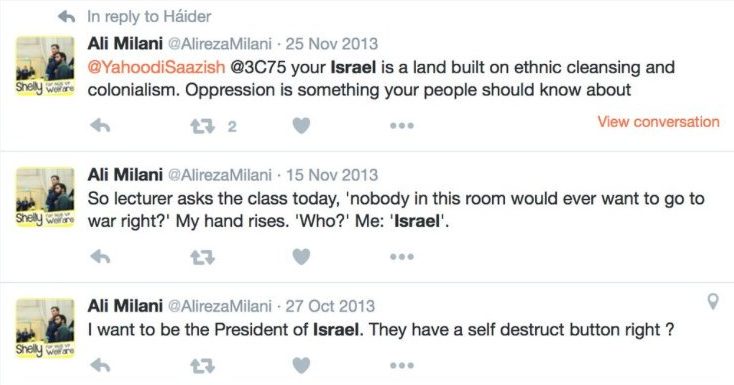 In this series of tweets, Milani makes a number of statements about Israeli-US relations, the Israel-Palestine conflict, and denies the right of Israel to exist.

In a reply to Piers Morgan, Milani uses ‘Zionist’ as an insult.

Milani is now running for VP of Union Development, with the vote set to take place at the end of the month at the NUS annual conference in Brighton. In a statement, he apologised and says his views have moved beyond those expressed in the tweets. “I have previously myself, through an article in the Huffington Post and a video produced on my campaign page, forthrightly acknowledged and unreservedly apologised for the antisemitic language I once used.

“I was lucky enough to be given a comprehensive political education through the NUS and Black Students campaign; I want to make sure that every student has access to an education that challenges the types of words and comments we once thought acceptable.” 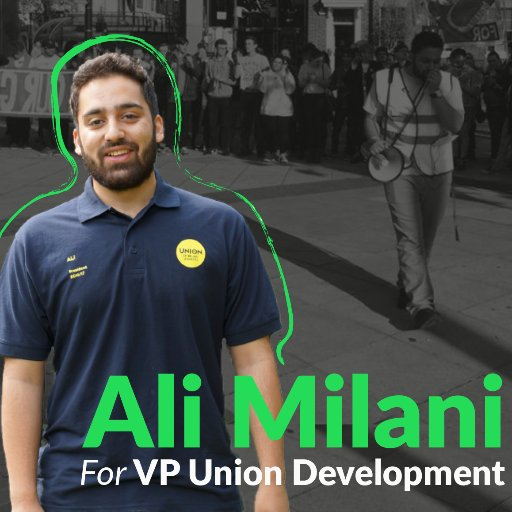 Josh Nagli, Campaigns Director for the Union of Jewish Students, added: “Jewish students will be rightly outraged when they see a candidate for a national position having used antisemitic tropes, many of which would be deemed antisemitic under the definition that NUS holds itself to.

“In a week where NUS research revealed a large proportion of Jewish students’ discomfort with attending NUS events, these tweets are likely to further entrench those opinions and provide further evidence of a culture in the student movement that wilfully tolerates antisemitism.

“Ahead of this month’s election, Ali must make clear his opposition to antisemitism in all its forms and clarify that he no longer holds these views.”

Milani is seeking election at the NUS National Conference in Brighton, running from 25th to 27th April. It caps a controversial year for the union, which has seen unions disaffiliate. The Brunel SU President is a supporter of Malia Bouattia, having signed an open letter in defence of the NUS President, after she escaped punishment for remarks a report by MPs found to “smack of racism”.

The NUS were contacted for comment, but declined to do so as Ali is running for an election at the National Conference.