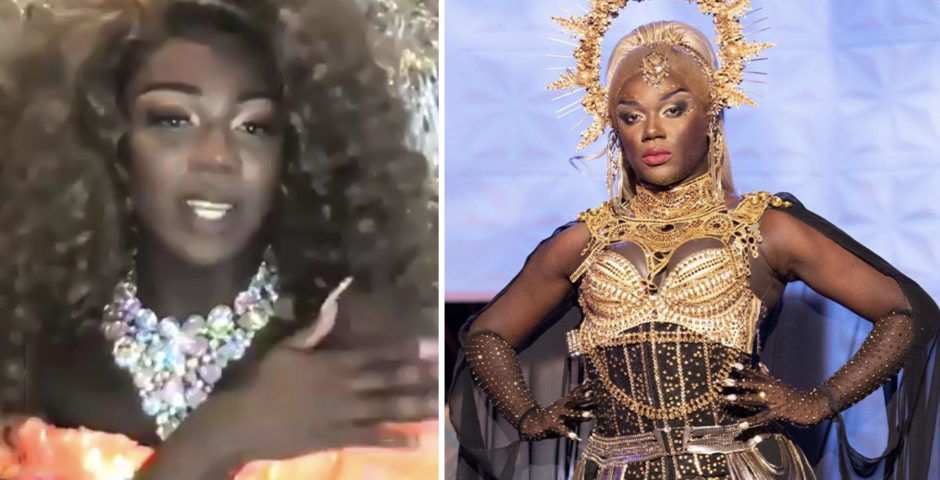 ‘If you wanted a show, you definitely got one’: Vanity Milan on her Drag Race UK journey

And the wholesome tale of how ‘dirty rice’ became iconic

After the top four proved last week that it wasn’t time for any of them to be sashaying away just yet, with the infamously difficult Drag Race Roast challenge this week the queens continued to show exactly why they fought their way to the top this season. Whilst Ella Vaday and Kitty Scott-Claus clearly excelled, Krystal did a valiant effort to minimal laughs and Vanity Milan ended up saying goodbye to Drag Race UK season three. Vanity can leave with her head held high – it was a great episode, she looked beautiful and proved throughout this season that she’s the definition of a lip sync assassin.

The Tab will be doing interviews on Friday afternoons with every eliminated queen this season, so make sure you check the website on Friday evenings to read what we get up to. Today, it was time to speak to Vanity Milan about her Drag Race UK elimination, so we hopped on a Zoom and got right into it:

‘I almost cried because I thought I did really bad’

“The Roast was definitely as hard as it looked. Like I said on the TV, the only thing I like to roast is chicken!” Vanity Milan is in the best mood when I catch up with her, completely proud of her run on Drag Race UK – but more than willing to dish the dirt on the Roast challenge this week. “It’s very hard for me to roast anybody, because I love all my sisters in the audience and I wasn’t very confident live speaking. Growing up it was always the thing I ran away from. But saying that, I didn’t do as bad as I thought I did! When we watched it back I thought we all did really well. I remember coming off stage, throwing the paper and crunching up into a ball and almost crying. But they edited it really nicely!”

It wouldn’t have been any fun if it was a miserable edit, because the top four all did strongly and looked gorgeous doing it. Did Vanity Milan have any idea that it was going to be her time to leave Drag Race UK? “Yeah, I felt it coming.  I understood that it’s not the best way to be top four when you’ve been bottom three times in a row. Somebody had to go home, especially when you’re up against Krystal who ‘was born to be a drag queen’! Fuck my drag, right?”

‘I didn’t want to be in the bottom, but if you wanted a show, you definitely got one’

I asked Vanity Milan how it felt to be the lip sync assassin of Drag Race UK season three. “It’s a blessing and I knew it was coming. this is what I do for a living, I’m a lip sync performer. I adore it. Obviously I didn’t want to be in the bottom, but if you wanted a show, you definitely g0t one. The fan reaction was insane. Twitter was going off, Instagram was going off, I got a message from Sabrina Washington! Fans were saying it was the best lip sync of the season, and it felt great to contribute to that moment.Let’s just say I broke the internet!” It was more than the lip sync of the season, it was up there with Tayce’s Memory performance as the best lip sync of Drag Race UK.

Favourite guest judge? “Alesha Dixon hands DOWN. When she said is everybody feeling the vibe I literally thought it was just me and her in the room. I even forgot about Scarlett for a minute because it was just me and Alesha bouncing back and forth.

‘Everyone got dirty rice!’

Vanity will be remembered for her iconic “dirty rice” catchphrase that had the whole cast and the judging panel quoting it along with her, and I asked her how it felt to have a bonafide, official Drag Race catchphrase: “How that came about was so strange. It was literally me sitting in the back ordering some food from production, I said ‘I’ll take some dirty rice’ and everyone started laughing. It then just became something we all would say as a group to lift spirits. Even production were saying it, and on the last day of filming they put it back on the menu and everyone got dirty rice!”

Vanity Milan beamed with pride on the show and on our call about getting to walk her husband’s outfits on the runway of Drag Race UK – and I asked her how it was getting to see his video message in Untucked. “I cried my eyes out watching it like I did on the show, he’s my ride or die. He’s my rock. Not having him there with me was hard. It was so emotional seeing him on the screen, I’m so proud of him.”

Vanity has known Ella and Kitty since 2019

I asked about how close the cast seemed, especially the top four after getting quite a few weeks working together in a small group thanks to double saves. “Yeah, the whole cast is really close. We’re in each other’s business the whole time. Like, when Choriza May released her new single she told us and we all instantly supported. Obviously the top four got even closer, and I’ve known Ella and Kitty since 2019 so it was great to see my sisters up there. I’d seen Krystal on social media and couldn’t wait to meet her, then met her and thought ‘I’m going home first!’ At my show last night, half of the cast were there! We’re very supportive.”

What’s Vanity most proud of? “My whole journey. From day one to my exit, because there’s been growth. I’ve learned so much about myself on Drag Race, and now I can apply that to my career off Drag Race.”

‘The judges said I looked amazing – so I agree with that!’

Did Vanity Milan agree with her critiques? “I did. I could have pushed it way further. I didn’t want to come across too savage and seem like a bitch. But they said I looked amazing – and I agree with that!” I told Vanity at least she got to go home when she looked the best she’s ever looked. “Everyone was saying that behind the scenes, that I was beaming from ear to ear. But I was just like, look at me. I made it to top four. Something I never thought I would do in this whole journey. I’m a very humble person. If I’d gone home first, I’d have been happy and grateful. But I made it to the top, and I’m still humble about that opportunity.”

• Scarlett Harlett on the ‘pressure’ of Drag Race UK, and how she wants to be the next Rylan