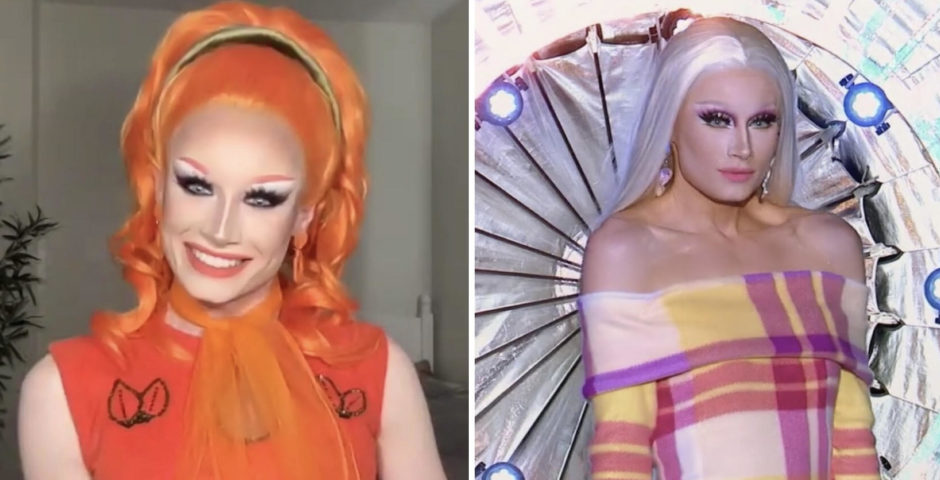 Scarlett Harlett on the ‘pressure’ of Drag Race UK, and how she wants to be the next Rylan

‘I knew that Vanity Milan was going to annihilate me’

Well, what an excellent episode of Drag Race UK season three that was! After a heartbreaking and widely criticised double exit of two fan favourites last week, all eyes were on the top five to see if they could continue season three without such big characters like Choriza May and River Medway. But thanks to an excellent and inspired new challenge and a great performance from all the queens, this week’s episode ended up being the highlight of the season. After a jawdropping lip sync to Scandalous by Mis-teeq, featuring an iconically enthusiastic Alesha Dixon, we sadly saw Scarlett Harlett exit season three of Drag Race UK. She put up a good fight, winning two lip syncs previously, but it was time for the Danny Dyer of Drag to sashay away.

The Tab will be doing interviews on Friday afternoons with every eliminated queen this season, so make sure you check the website on Friday evenings to read what we get up to. Today, it was time to speak to Scarlett Harlett about her Drag Race UK elimination, so we hopped on a Zoom and got right into it…

‘Watching it on TV? Hilarious. Being there? Stressful as hell’

Last night’s episode had a timed runway challenge that we’ve never seen on RuPaul’s Drag Race before, and I asked Scarlett what it was like to be the guinea pig. “It was really exciting to be part of an episode that has never been done. Drag Race is still able to switch up the format and make it entertaining. I’m not gonna lie, watching it on TV – hilarious. Being there? Stressful as hell!” I needed to know if the strict time limits were actually enforced, and Scarlett backed them up straight away. “The time was right, and they were making it even more stressful having RuPaul announcing how long was left over the tannoys! It was pure unadulterated panic and fear. But that’s what makes good TV!”

And great TV it was, and brought out the best in all the queens. The format should be a mainstay across the global franchise going forward. “When I was watching it back I just thought, ‘how the hell did we manage that?'”

Scarlett Harlett spent most of the season in the work room wearing a coat and a thermal jumper. “Insider tea, it is like Iceland in there. Getting ready at 8am for the runway and it was so cold that I put a towel down on the floor so my bare feet didn’t have to touch the floor. RuPaul makes it freezing. He keeps it ice cold like a freezer.”

‘I deserved to be in the bottom’

On a strong week from all the queens, it was hard to clock which would end up lip syncing. “I kind of deserved to be in the bottom. Objectively, I think my outfit was more of a character and caricature, but they were looking for more fashion-ugly. Krystal and Ella were so on category. I loved my outfit and was happy to be sent home in it, but I do think I missed the mark a bit. It was all very me.” I agree – and it was nice to see Scarlett go home in good spirits in a look she clearly loved, rather than full of regret and upset.  “After I said ‘you ain’t my mother’ and Ru screamed ‘yes I am’, how could I not walk out thinking it was brilliant?”

‘I knew that Vanity was going to absolutely annihilate me’

“The lip sync song I love, and I knew Vanity was going to annihilate me. But that kind of just released me to have fun.” The lip sync was pure euphoria, with Vanity Milan turning in easily the best performance of the season. A particular fan of it was guest judge Alesha Dixon – who spent the whole performance heckling and adlibbing along to her own song Scandalous. “It was feeding us! Watching her living to it was just making me want to go more. Watching yourself lip sync isn’t the funnest experience in the world, but watching that one I just really enjoyed.”

‘I used making Ru laugh as a crutch’

Scarlett Harlett openly said she was there to make Ru laugh – it’s no secret that if RuPaul finds you funny you’ll stick around on Drag Race UK for some time. “I’m not a look queen, and I felt like I relied on making Ru laugh as a crutch. I saw the other girls and thought if I’m not the funny one, what am I doing here? Making Ru laugh is really important. I did it because I felt like it was my only way to crawl through the competition when I was struggling on the runway. You can’t go wrong making Ru laugh.”

Scarlett Harlett spent two weeks of Drag Race UK in the bottom, and I wanted to know which challenge she found the hardest. “The girl group challenge. That was the first one where I faltered. Watching it was quite an emotional moment for me, because I remember how traumatic it was. I put a lot of pressure on myself that episode to get it right, because come on, ‘Bing Bang Bong’? How are you going to follow that? When I fucked up, I cried profusely on the main stage. It’s hard. There was so much to remember and I let it all get on top of me. If I could go back I would love to redo that one.”

‘I was hanging on by a thread, I felt really alone’

Scarlett Harlett got notably upset after the majority of the girls chose her as the weakest. I asked her how it was to watch yourself back on TV when your emotions take hold of you like that. “It was hard because I can see in my own face how much I’m struggling in that moment. I was hanging on by a thread. I felt so alone in that moment. I wanted to walk away, because I needed a moment. but on TV you don’t get a moment. I just wanted to burst into tears and run away. It’s hard to watch. That person who got so angry is a person I don’t recognise. For the negative comments I’ve got about my behaviour, I agree with people. It’s hard to watch. If I could go back I’d love to change that. Drag Race UK is a rollercoaster and you’ve got to take it how it is”.

Scarlett is most proud about getting to discuss her mother’s illness on TV, in a moving chat with Kitty Scott-Claus. “Getting to talk  about my mum on TV and speak about her having COPD and telling the world about something so personal to me was quite freeing. And my mum was so proud of me and was happy with how it went. Getting a picture of me and my mum on TV was such a special moment.”

‘I’m glad I got to have every experience on Drag Race, the highs and the lows’

Frame of mind is extremely important to Drag Race UK success, and Scarlett Harlett openly says she got in her own head throughout the season and the pressure is tough. “It’s really hard not to get in your own head. The pressure from the judges and being on TV and from the other girls, it really can take you to places you wouldn’t go. It took me to a really negative place that I didn’t enjoy watching. I’m trying to look at it in a way that I’m glad I got to have every experience of Drag Race, the highs and the lows and all the in between.”

Who would Scarlett Harlett like to see win? “My girl Kitty. She’s hilarious. She was there for that conversation with my mum, and it was a really sweet moment that brought us together.” I asked Scarlett what’s next for her career and she is not holding back with her ambitions. “I want to do more TV. I want to be the next Rylan, or Lily Savage. I know those are big ambitions but you’ve got to dream big!”