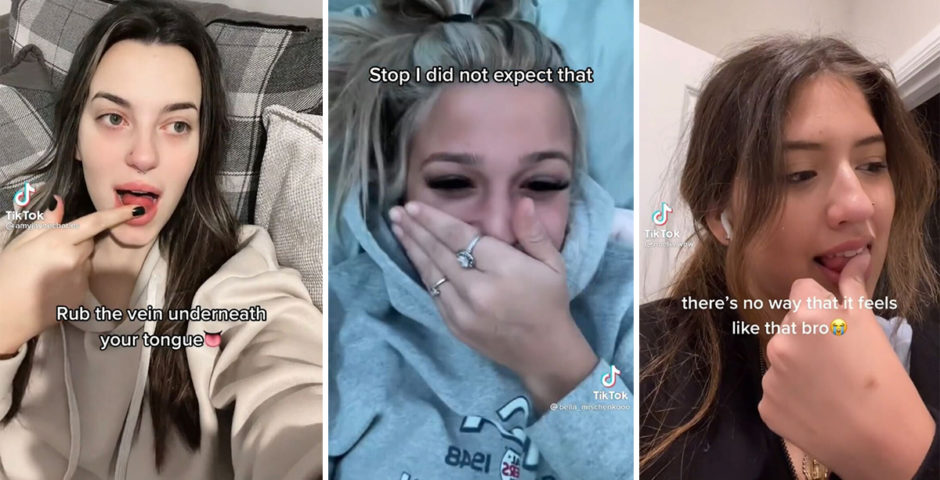 This is not why I downloaded TikTok

TikTok makes us do some really weird stuff. We’ve recently had people attempt to convince us to use lube as a primer for make up and then we were shown a new trend called devious licks where people straight up stole stuff from their school. But now we’re learning from TikTok that rubbing under your tongue with your finger feels like you’re touching a penis. Yes, you read that right, it feels as though you’re touching a winky – it’s so cursed.

It’s not clear who started the trend but whoever it was needs to take a long, hard look at themselves in the mirror and reevaluate whether they should be on TikTok or not. People on TikTok are genuinely rubbing under their tongue and filming it. And the worst part is the fact thousands of us are stopping in our tracks and doing the same just to see what the hell this trend is on about. Also a lot of people are doing it and still not clocking. so if you’ve come across a TikTok of someone rubbing under their tongue and read through the comments to find out why whilst having a finger in your gob then now you know why.

You’re probably in denial, but unfortunately there’s a scientific explanation which makes this entire thing very real. Apparently the muscles on both body parts have similar textures. Terrifying, right? If you still don’t believe it then watch for yourself.

@amyjaynecharlesWELL WHAT IN THE 🤣♬ original sound – vinnie

• What the hell does ‘wom’ even mean and why is it all over my TikTok FYP?