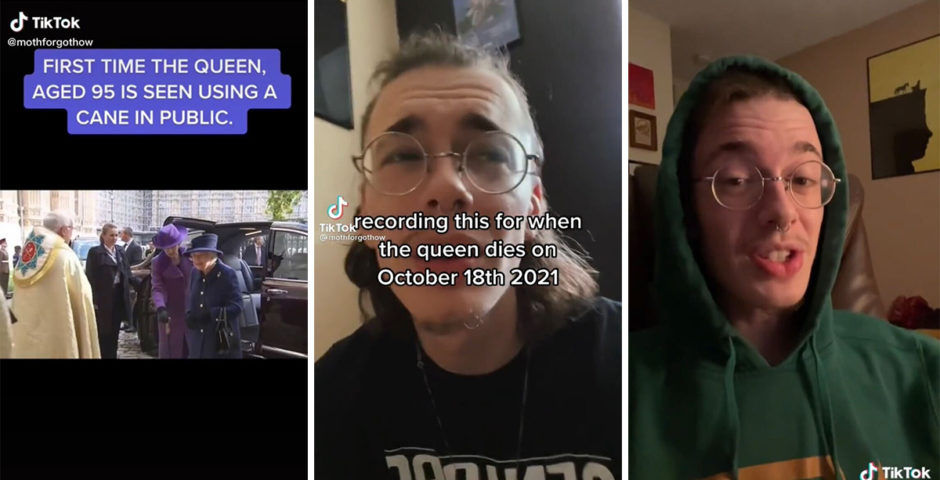 Someone on TikTok has gone viral for sharing a theory that suggests the death of the Queen is going to happen on October 18, and people are obsessing over it.

The video, which has 15.5 million views, begins with a clip of the Queen getting out of a car with a walking stick. The caption says, “First time the Queen, aged 95, is seen using a cane in public.” Then the TikTok user who created the theory explains the Queen’s health is declining and says that on October 18 around 5:47pm and surrounded by her loved ones except Will and Kate, the Queen is going to pass. You can watch the full video here:

The TikToker also suggests Prince Andrew, the son of the Queen, is going to die on October 22 and his death is related to his recent police investigation being dropped.

In the comment section on the video, the top comment which has over 400,00 likes says: “My dude, if this comes true you’re going to get Princess Diana’d”. Another comment says: “For legal purposes, I never saw this video” – same here.

Because of the popularity of the video, other users are now sharing the information and posting their own videos captioned with “Duetting this on October 18 when the death of the Queen is confirmed.”

The original user who posted the video made another video with over six million views and they captioned it: “Recording this for when the Queen dies on October 18 2021.” Hopefully nothing will actually happen to the Queen on October 18, but if it does then best of luck to everyone who had made a video about her death theory.

• What is beaning and why is it all over my TikTok right now?

• Who is couch guy on TikTok and why is everyone saying he’s been caught cheating in 4k?