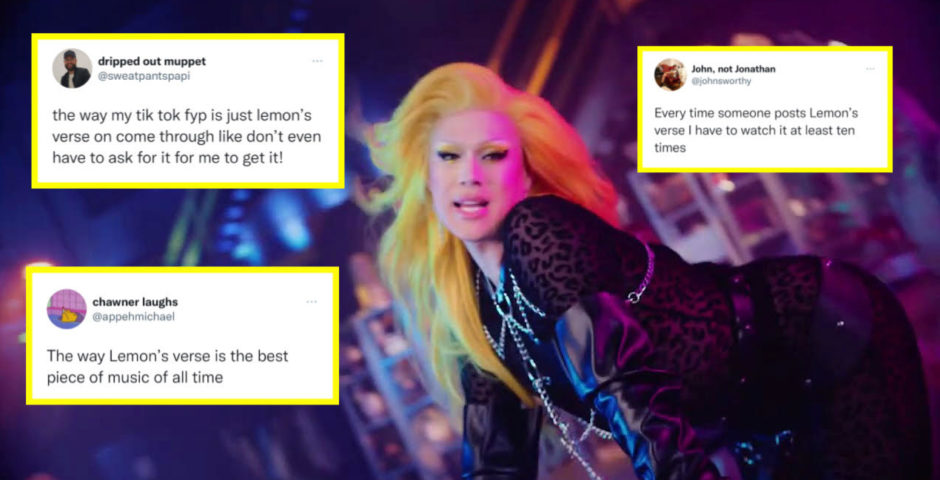 Lemon from Drag Race’s rap verse is so good it’s ‘stunting plenty’ on, well, everyone

Every now and then, a queen from RuPaul’s Drag Race will write a little verse that ends up having more cultural impact than anything William Shakespeare ever penned. We saw it first with nearly the entirety of Read U Wrote U, with Alaska, Katya and Detox gobbling up most of the rap contemporaries with their sharp lyricism and history-making performance. We saw it with the scripture that is “Release the beast: BIMINI” and “I like it rough but my lentils tender” on Drag Race UK earlier this year. And now it’s Canada’s turn, thanks to Lemon using her 23-second-long verse on Priyanka’s song Come Through to make her mark on the rap world forever.

So good, in fact, that Canada’s Drag Race season one winner Priyanka uploaded the above one-hour-long looped editor of Lemon’s verse to her YouTube channel. Literally emitting the rest of her song to champion her friend who stole the show. Very iconic.

What makes the breakout success of Lemon’s verse all the more sweeter is how underestimated she was on the rap challenge during season one of Canada’s Drag Race. In an iconic moment for the ages, Lemon declared in the Werk Room to the other queens and then-judge Jeffrey Bowyer-Chapman that she is, and I quote, “a straight-up rapstress”. The rest of them scoffed at her, but Lemon ate the challenge UP and then went on to pen her masterpiece verse on Come Through. The citrus queen has the last laugh.

The Drag Race community have embraced Lemon and her Come Through verse with open arms, and so has the wider online world now TikTok is getting wind of it. It’s what Lemon has always deserved tbh – ever since she went on a live and read out the lyrics of M to the B by Millie B it was clear she was destined for greatness.

T-Pain said it was ‘fire’

t-pain said my verse was fire 🔥 and he’s right https://t.co/FPksPUiQMB

Twitter has been cherishing the verse for a few weeks now, but now the professionals are sending in their acclaim. Much to Lemon’s delight. TikTok’s filling up with every girl, gay and they paying tribute to the banger too, here are a few of the funniest. And once you’ve done laughing, stream the Lemon Come Through verse one hour loop on YouTube for gay rights and clear skin.

1. I think the killer would understand and join in tbh

2. It’s all about that two seconds of choreo

5. If I could do this without dying I absolutely would